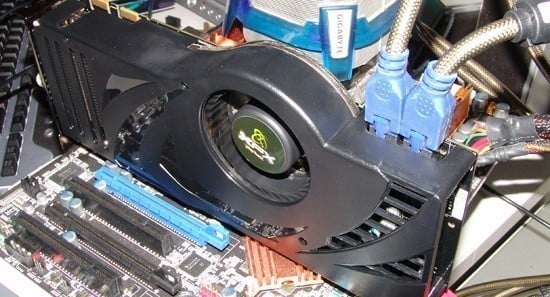 So you read the reviews on the brand new reference Nvidia GeForce 8800 Ultra graphics card the other day, and you thought "Hey! GeForce Ultra is not that Ultra at all!" It is currently without a doubt at the top of the graphics card leader board at the moment, king of the hill by a long way but the former crown holder 8800 GTX was already doing pretty well, anyway. The tweaked out G80 GPU is Nvidia's answer preemptive strike to whatever AMD might come out with later this month in their new R600 range.

Let's find out if the Ultra can be truly and fully "Ultra" with the help of XFX and all the overclockers that work at the company who want to give us nothing but performance and huge amounts of it.

There is not much point going into too much detail on the GPU itself as it's really just a GeForce 8800GTX on steroids - increase clocks across the board gives us more bandwidth - there are no other changes, it is just a refresher product. Nvidia claims a newer revision chip is used which is the reason for being able to pump out the higher clock speeds - maybe they just got lucky with some better than expected factory yields, nevertheless, the 8800 Ultra is here.

Let us have a look at exactly what XFX are offering us today and see if it's worth getting or not. After all, that is a very important question, as it does come with an RRP of around $1400 AUD in Australia or around $1000 - $1100 USD in the United States. Yep, and unless you are reading whilst rolling around in your secured money pit right now, you thought the regular 8800 Ultra was excessively expensive at $850 USD.

Straight away we have an awesome looking box from XFX, they have moved away from the white background to the black here and it gives it a bit more evil and sinister look. It really suits it overall. 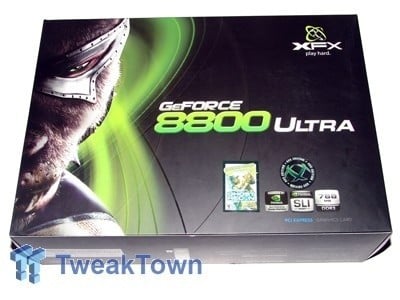 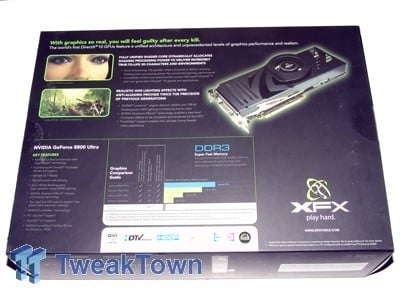 Turning the box over we have a picture of the card in the top along with the main features on offer from the G80 core and the 8800 Ultra today. There is no mention of any clock speeds anywhere on the front or back and the only thing we can see is that on the sticker we have 675M which is the core clock of the card. 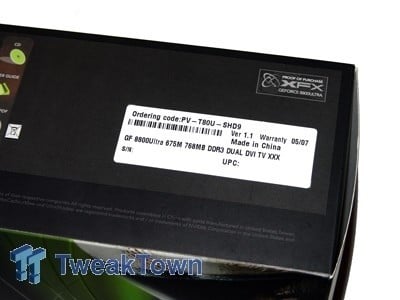 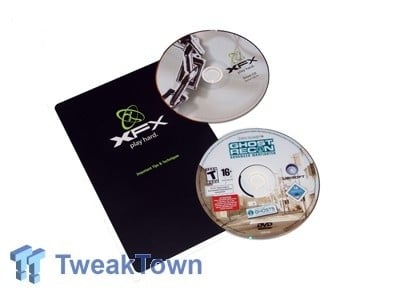 Moving inside the package it is much of the same - we have our normal array of paper work that sits with the driver CD and a full version copy of Ghost Recon Advanced Warfighter. While it's nice to see a full version game something a bit more recent would have been nice especially considering the price tag that comes with it. Heck, it would be out of the question to throw in two or three games to help justice the extravagant price tag. 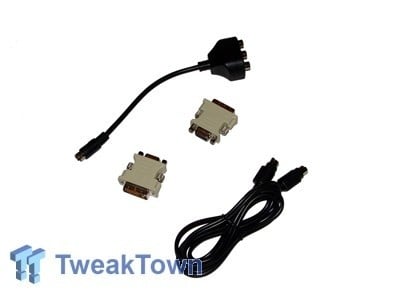 Cables are also very standard, component breakout cable, S-Video and two DVI to VGA connectors. Don't have enough PCI Express power connectors on your power supply? Well, too bad... none are included in the package. With that said though we can understand it this time around, with a card of this caliber if you don't have a power supply that has at least two PCI Express connectors we would be recommending a new power supply without question as chances are your current PSU ain't gonna cut any cheese here.

Overall the box looks great but the package is on the light side, with that said we aren't too sure what we expected from it though we can say probably a little bit more when you look at the price of the thing.

It is the black sheep of the family, alright! At first glance, it oozes with style and is just shouting out monster performance with its sleek black appearance. Considering the price, it should damn well almost smile politely back at you too.

Length wise the PCB is exactly the same as the GTX, the only difference with the dimensions is that it sits slightly higher due to the cooler that covers the entire front side of the card but this is not going to be a problem for anyone as the PCI Express power connectors are still coming out above the card through a conveniently placed hole. 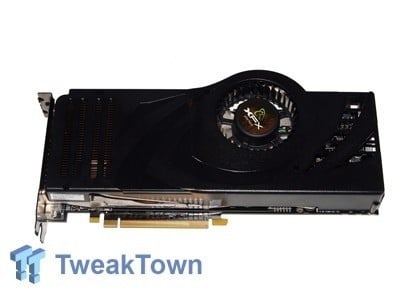 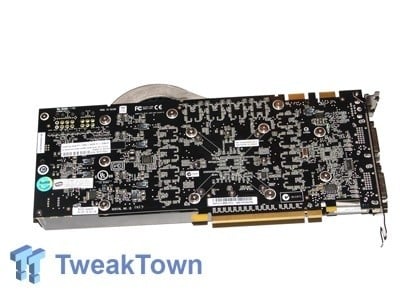 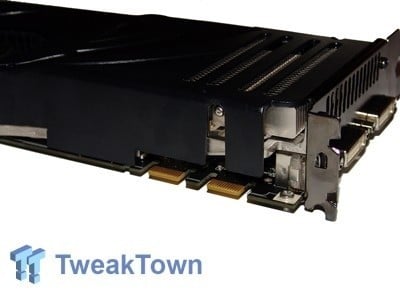 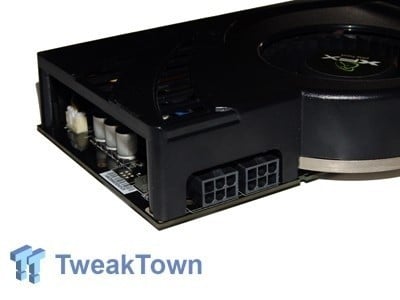 We can see that the PCI Express power connectors are in the same location as the standard GTX but simply have a cover around it this time. 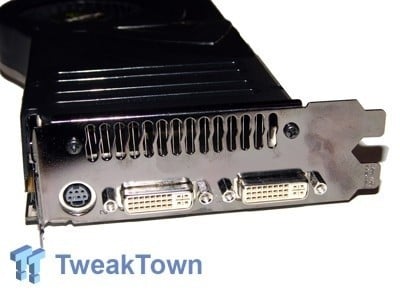 I/O wise is also exactly the same with a couple of dual-link DVI ports and TV out port. As you would probably already assume the card is also of course a dual slot unit.

Volume levels of the card is actually really good, while the setup of the card is different to that of the previous 8800GTX king, it uses the same kind of fan, which is quiet and does a pretty good job at keeping the card cool - clearly good enough for XFX to go a bit crazy with the clock speeds.

Our non-HDR tests show us hitting a CPU wall up to 2560 x 1600 and even at the lower resolution HDR test. There are some significant gains at the highest resolution when HDR is enabled.

Our lower resolution tests shows performance gains like you would expect but nothing too significant, it's not until we hit 1920 x 1200 and 2560 x 1600 that we really see what the card is made of and how it can continue to push out the high FPS.

Low resolution F.E.A.R. results are a bit all over the place but we can see at the higher res the averages beginning to see the same pattern as we have seen so far.

COH really sees significant gains at the highest resolution with it being capable of breaking that 30 FPS minimum barrier at 2560 x 1500, the Ultra is a clear performer when you start climbing up in the resolution in the latest intensive games.

As soon as we start to increase the strain on the GPU we can see that the Ultra really is able to handle itself when under pressure.

We again see gains exceeding 20% at these intensive settings and offering what is the difference between playable and not playable at these ultra HD resolutions. With Half Life 2 not supporting SLI you're not going to get any better performance from another set up at the moment.

You cannot say that the new Nvidia GeForce 8800 Ultra is not a true performer let alone when you pair it up with the XFX brand and their factory overclocked XXX edition but this is coming at such a huge cost to the user. The other thing is though, it is not just the XFX price premium that we have seen for a while now - every brand has a huge price starting at around $1050 AUD in Australia or around $850 USD in the United States. Consider that the GeForce 8800GTX starts at $750 AUD and you have to really wonder how on earth does someone justify spending the extra cash.

The card is nothing more than a way of sticking it to AMD and ATI - in a marketing sense - in regards to their upcoming R600 launch later this month. Much like Intel seem to be trying their very hardest to destroy AMD, Nvidia is also giving it their best shot, too.

XFX's 8800 Ultra XXX screams along at top speed leaving every other single GPU solution in the dust, there is no doubt about that. However it is safe to say that with word on the street that supply and quantities is very low, Nvidia is not expecting to sell many of these graphics cards. We have even heard from some of Nvidia's partners in Taiwan that they do not even want to touch the tweaked G80 chip in fear that they will not sell. Nvidia believe there will be a few handfuls of ultra high-end extreme users out there that will pay the money just to have the best of the best.

Bottom line... absolutely monster killer performance but with a price tag that could make you faint! It gets our "MUST HAVE" award for Best Performance only because it is the single GPU champion but your money is honestly much better spent elsewhere.

- Cons
Price!
Light package
Price!
Limited supply - get in quick!
Price!
Better options (such as SLI) available for the price!