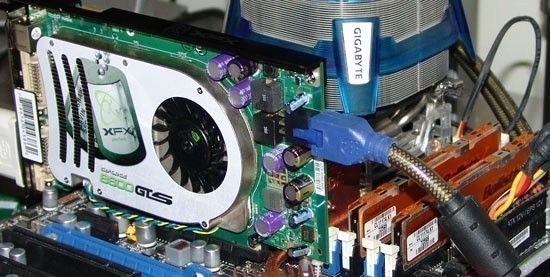 New graphics cards are great, especially when they are in the "affordable for most people" range. nVidia's GeForce 8600 and 8500 series has been a long waited product. Why? Most importantly it's the first affordable DirectX 10 capable graphics card from any company and nVidia even have Windows Vista drivers ready for the new range of cards at launch time.

This product is so good for the market for two reasons - the first is that consumers who don't have thousands of dollars to spend on a PC can now buy something that is going to offer support for the next generation of graphics (DX10 / Shader Model 4.0 with games like Crysis, Alan Wake and UT2007 coming). The second is because more people will be able to buy these GeForce 8500 and 8500 cards with it's much more attractive price tag, game makers will have even more reason to put resources into making DirectX 10 supported games. The latter is something that is seriously lacking at the moment but the games are on their way slowly but surely.

It's nice to see that XFX have moved back to the X shaped box with the latest graphics card from them. Oh what a box it is too - it looks great with our big mean wolf man on the front. 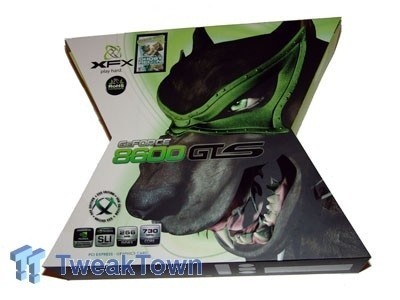 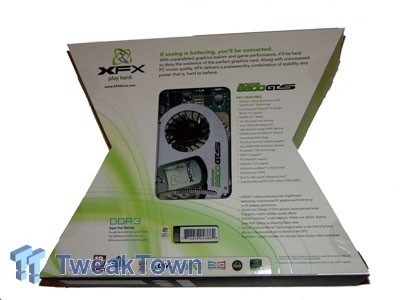 Turning the box over we have a blurb across the top about XFX along with the key features of the 8600GTS. In the middle of the box we have a see through window that shows us our first glance of the new GeForce 8600GTS. 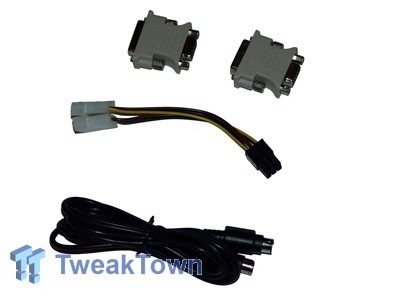 Moving inside the box we have got our normal array of goodies, two DVI to VGA connectors (finally included both - good job XFX!), S-Video cable along with a molex to PCI Express power connector just in case you don't have one on your power supply, which is also something XFX don't always do. 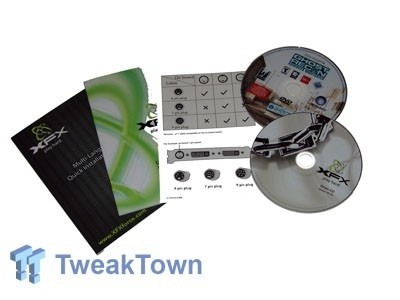 Diving further in the box we have some paperwork, quick installation guide, user manual and an explanation on the S-Video port. Included also in the package is a driver CD along with a copy of Ghost Recon Advanced Warfighter as we mentioned was included on the front of the box.

With all the boring bits out the way, it's time to get down and dirty with the graphics card itself. Sitting at only 7.2" long, it is a very standard mid-range card as far as size goes. 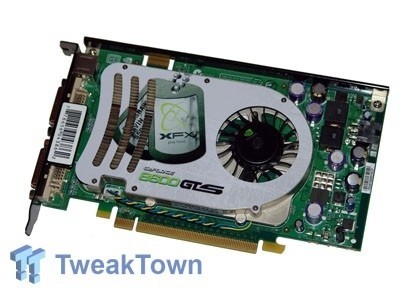 The front of the card is dominated by the largish heat sink fan combination but on a very positive note, the cooler is thin enough that it doesn't take up any other slots. The smaller fan means that it has to spin at a higher speed to push more air which results in more noise - the card isn't whisper quiet but at the same time, it isn't what we would call unbearable either.

It could be a lot worse though as XFX managed to attain a large factory overclock with just stock cooling. We should see some modified cards over the next few months that use coolers from companies like Arctic Cooling and Zalman and possibly push clock speeds even higher as chip revisions improve but that's all still in the future. 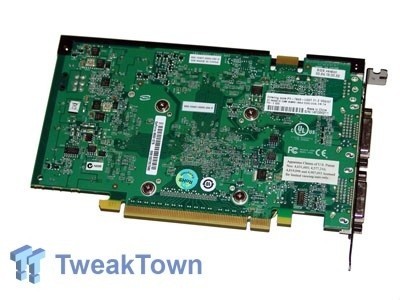 The back of the card is as always very standard looking, we have our normal array of numbers that tell us what the card is and the normal details like serial number and what not. The heat sink fan screws in as opposed to clips which gives you a more solid and sturdy cooler. 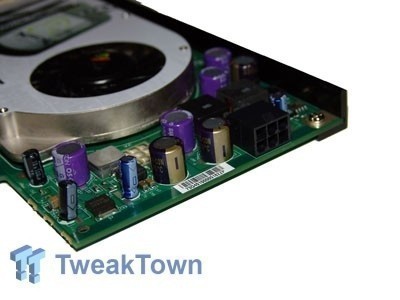 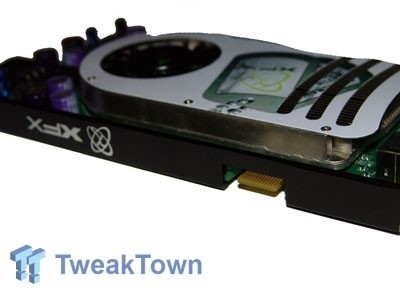 The top of the card naturally has an SLI connector which of course if you find yourself with a second 8600GTS down the track, you can get an increase in performance of up to 90%. We will be investigating SLI performance down the track in a separate article. We also have the tension bar running across the top of the card, which is supposed to help prevent the card from bending and damaging the SLI connector but does it really help? Who knows but it looks kick ass! 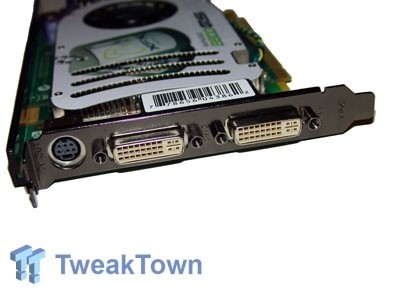 Like all XFX cards the I/O give us our black plate and it includes two DVI ports capable of outputting up to 2560 x 1600 thanks to the support of Dual-Link.

Two of the major features are dual Dual-Link DVI connectivity and the fact that HDCP is supported. We should see HDCP support on the lower end models such as the 8500GT and 8600GT and once we see a HDMI version of the card, it is quickly going to become the graphics card of choice for home theater users as HDCP will help bring next gen movie formats like Blu-ray and HD DVD to your HDTV through a PC a lot easier.

We have a stock clocked reference GeForce 8600GTS to see how the overclocked XFX edition compares to a stock card. We have a pair of XFX GeForce 7600GT Fatal1ty cards in SLI dual graphics mode, Inno3D and their iChill GeForce 7900GS and Sapphire's Radeon X1950GT 256MB card. This pretty much covers the whole high-end mid-range market and what the GeForce 8600GTS should be competing against in terms of pricing.

As we currently still use the demo version of Company of Heroes and it's in built performance test we have not included the SLI GeForce 7600GT results in this test due to the known issue that is found in SLI.

Due to a lack of DX10 games and applications, we cannot provide any DX10 performance results but even if we could, we wouldn't have anything to compare against anyway in the mainstream VGA segment.

We will see if this continues to transform into real world tests in just a moment.

HDR test show us the overclocked 8600GTS again continues to take the lead, the stock clocked model falls back a bit with only the 7900GS beating it. Non-HDR tests show that the 8600GTS, 7900GS and X1950GT sit very similar. Half Life Lost Coast doesn't gain from an SLI setup so we can see the 7600GTs really fall back.

GeForce 8600GTS really seems to take a bit of a hit when compared to the GeForce 7900GS in PREY, it sits a bit back at the lower resolution and further back again when we start increasing it.

Finishing with PREY we can see that the GeForce 7900GS is again the fastest card, the GeForce 8600GTS sits in line with the Radeon X1950GT from ATI.

By the end of my benchmarking, I was slightly disappointed -not sure if I should expect more or what but the 8600GTS just didn't "wow" me like I thought it would. When thinking about it for longer, I came to the simple conclusion that the 8600GTS didn't "wow" me because of the huge amount of graphics cards we test. You become so use to hitting the "benchmark" button on 3DMark06, then turning back 10 minutes later and seeing a score in excess of 10000 marks and then you see something under it and lose excitement about the lower performing product.

Having said that though, nVidia's GeForce 8600GTS is a fantastic graphics card; it does exactly what it's supposed - it gives budget conscious users the opportunity to climb into the DX10 gaming arena for when PC games like Crysis, UT2007 and Alan Wake are released later this year.

We've established that the actual 8600GT chip design from nVidia is great but what about XFX and their further refinements? XFX has also done a fantastic job - out of the box clock speeds are simply fantastic. They offer huge gains in performance over the standard clocked version and to the best of our knowledge XFX is offering the highest clock speed out of any nVidia partner. XFX seemed to have gone right to the edge with the XXX edition - only a jump of a few MHz on the core would result in a screen full of artifacts. Is this the limit of the 8600GTS, period?

nVidia are really on the ball at the moment and hopefully we begin to see some DX10 games released in the coming months, as it really is the only thing missing. While AMD's R600 Radeon HD 2900XT might only just be around the corner for a May launch, the majority of gamers who deal with a realistic budget will be out buying their brand new mid-range nVidia GeForce 8000 series cards, at least that's what we suggest and see happening.

So, should you buy a GeForce 8600GTS if you have the money? If you already have a GeForce 7900GS or Radeon X1950PRO (which is slightly faster than the 7900GS), we wouldn't recommend buying as you're not really upgrading, unless you must have DX10, Dual-Link DVI or HDCP support. If you're using something older or slower such as GeForce 6600GT, 7600GT or Radeon X1650XT and you're ready to make an upgrade, it's a totally brilliant choice with the future in mind. XFX's GeForce 8600GTS XXX edition is going to cost you around $240 USD at launch (today) and a regular version without factory overclocking will set you back around $200 USD, making the product something to take into serious consideration in our opinion.