The MMO and MOBA mouse in lightweight wireless form, the SteelSeries Aerox 9 Wireless is definitely for those that want their fair share of programmable buttons.

A mouse designed with MMO and MOBA players in mind means one thing - lots of buttons on the side. As we're talking about a genre where the 0-9 number keys on a keyboard correlate to triggering abilities and skills, and items, convoluted controls are the order of the day. Or complicated ones at best, as controlling a character in an MMO can be as busy as its UI chock-full of icons. With League of Legends, DOTA 2, and other popular MOBAs following a similar setup, not to mention the release of World of Warcraft: Dragonflight breathing new life into Blizzard's long-running online RPG, the need for something like the SteelSeries Aerox 9 Wireless in 2022 is strong. 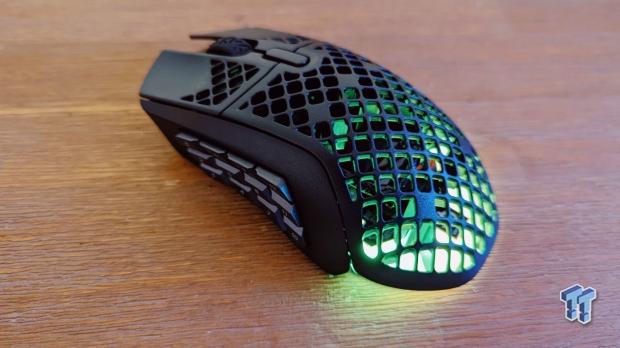 That is if your main game jams are any of the titles listed above or sit mainly within the realm of these two very specific and popular genres. As per its namesake, SteelSeries is taking the button and customization-filled MMO and MOBA mouse and giving it the lightweight wireless treatment. With its 89-gram weight, it's an ultralight but not in the featherweight realm of esports peripherals. You can probably tell by the Honeycomb design, too, aka gaming mouse speed holes.

Going this route to shed weight isn't the only option, but it's good to see SteelSeries add an extra layer of protection to the circuitry that it calls AquaBarrier Protection. It's a level of dirt, dust, oil, and other spill and debris protection.

By far the biggest selling point, and the SteelSeries Aerox 9 Wireless has a somewhat premium price-tag of USD 159.99 and AUD 299, is the sheer level of customization on offer. With 12 dedicated buttons on the left side of the mouse, you've got a total of 18 programmable buttons in total with the option to set up macros and make changes from a single-screen interface in the SteelSeries Engine software. 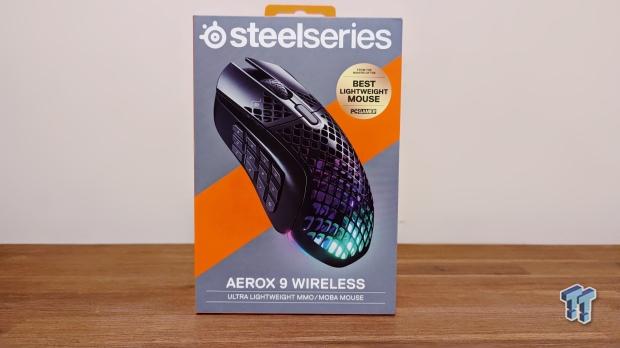 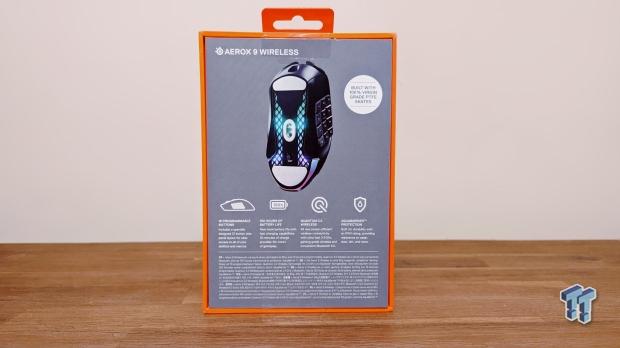 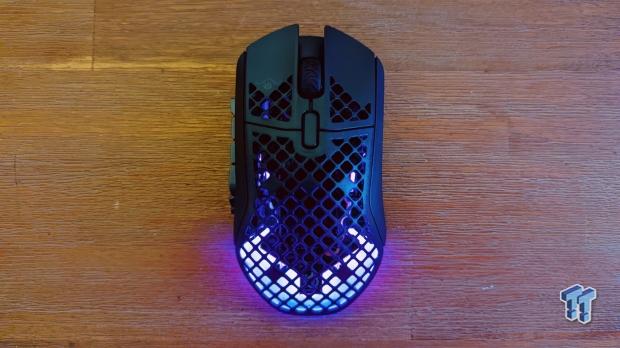 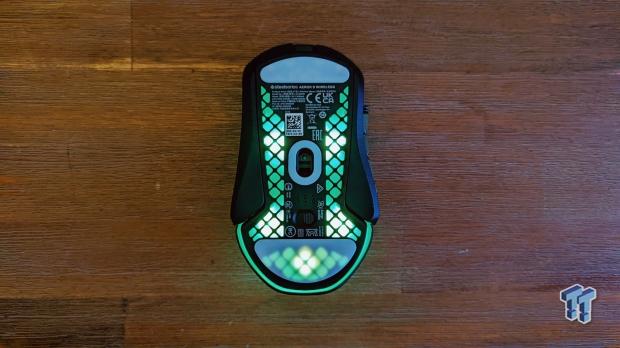 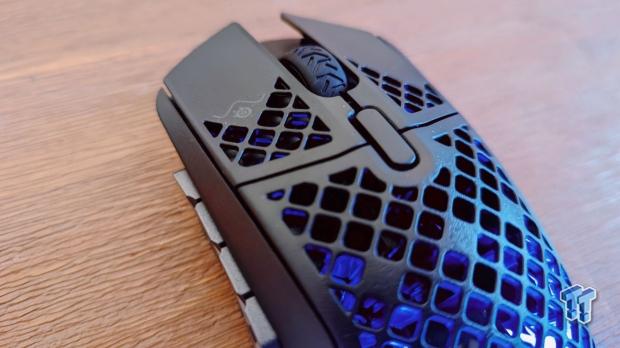 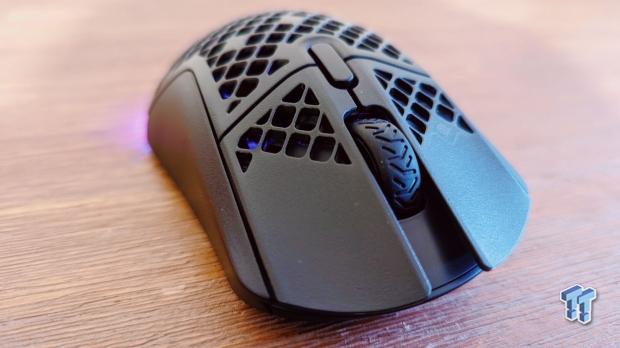 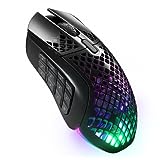 The SteelSeries Aerox range covers a few different models, from wired to wireless, but in terms of construction and hardware, they are pretty similar. With all its buttons, the SteelSeries Aerox 9 Wireless is the MMO and MOBA model - so talking about the comfort and feel of having your thumb sit on countless buttons is more of a personal preference thing. Even as someone who just dabbles in these genres, one of the main issues, and something shared by many others, is that an MMO mouse can often feel too cluttered.

That's still the case here, but a lot of that sentiment is born from what you can get used to. The buttons on the side of the Aerox 9 are sturdy, easy enough to press, and won't accidentally trigger from simple movement. 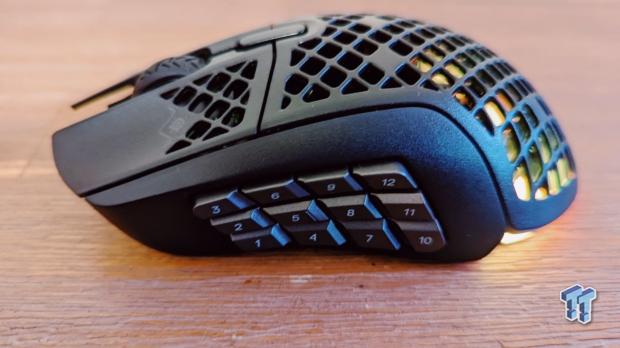 There's a premium feel to the build and construction that's commendable too. With its Honeycomb design, there aren't any perceivable stress points, even when applying pressure on different parts of the mouse. In terms of physical stature, the SteelSeries Aerox 9 Wireless is larger than some - which would need to be the case with so many buttons - and best suited to a palm-style grip and hands that aren't, well, tiny.

Though it must be said that the rough feeling you get from the speed holes and the buttons aplenty on the left side does lead to a less comfortable experience than what a smooth rubberized grip mouse could provide.

But, add in the 89-gram weight and the not-too-large size, and the SteelSeries Aerox 9 Wireless might just be the best feeling MMO and MOBA mouse to date. In addition to the side buttons, the scroll wheel also provides left and right-tilt functionality, so the potential for customization is next level.

There are also some cool visual touches to the design, with the RGB lighting creating a visible glow to the underside that you can see through the holes. And with a small PCB (which SteelSeries says is 50% slimmer than... something, but it isn't clear), the RGB action is not only very visible but very cool.

Inside the Aerox 9 Wireless, you'll find SteelSeries' own TrueMove Air sensor, with a sensitivity of 18000 DPI and tracking of 400 IPS (inches per second). The sensor was developed in partnership with PixArt and seemed to be based on a more mid-range sensor versus something high-end. So yeah, in terms of cutting-edge sensors, it's not up there when compared to some of the more premium offerings seen in competing products.

This is a shame because the Aerox 9 does venture into premium-price territory. This also means increments are limited to 100 versus the more common 50 we're starting to see in new sensors.

It's certainly accurate, and with the 1000Hz polling rate and Quantum 2.0 Wireless (the SteelSeries version of high-end 2.4 GHz transmission), you don't need to worry about wired versus wireless latency. And it's efficient, with battery life extending up to 180 hours when in Bluetooth mode or around 80 hours over wireless, even with lighting.

Although to get to the customizations, you need to go through the main SteelSeries GG window, head to the SteelSeries Engine tab, and then open a SteelSeries Aerox 9 Wireless window - all the in-depth stuff is kept on a single screen. It's a little busy, but hey, so is the Aerox 9 in terms of programmable buttons. Assigning functions to each of the 12 side buttons is super simple. By default, they're mapped to the numerical keys, and all you need to do is select one and then choose what you're after in terms of mouse, system, or keyboard settings. 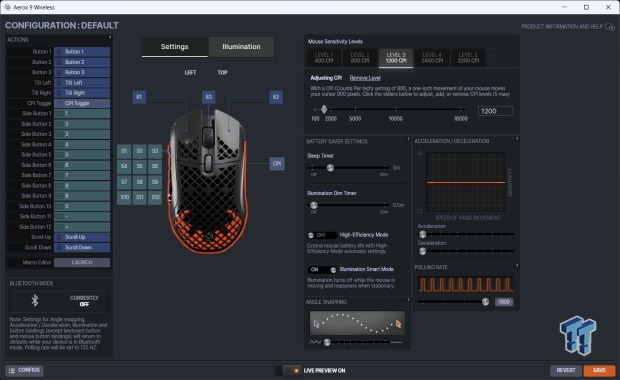 The layout, although busy, is clean with DPI (which SteelSeries labels CPI) settings and intervals on the right-hand side with options to adjust the polling rate and other features. There's even an angle-snapping setting to smooth out horizontal and vertical movement, though this isn't all that helpful for playing MMOs and MOBAs. 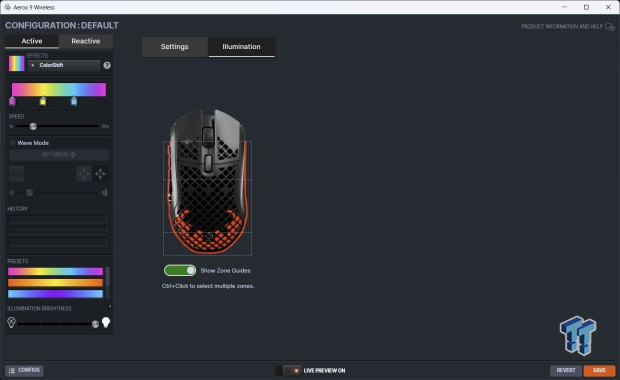 Adjusting the lighting changes the UI, and in terms of options, you've only got a handful of modes - from static to cycles. There are also options to create and save different profiles, but it would have been nice to have seen game-specific profiles as part of the SteelSeries Aerox 9 Wireless customization. Being able to switch between DOTA 2 and WoW and Final Fantasy XIV profiles already there (as opposed to fine-tuning yourself) would add that little bit extra to the robust and powerful SteelSeries software.

There's certainly a steep learning curve that comes with the SteelSeries Aerox 9 Wireless or any MMO-style gaming mouse, for that matter. Moving away from dexterous keyboard presses to a relatively small area on the side of the mouse - using your thumb - takes some getting used to. On that note, firing up League of Legends first was the right choice in that there are fewer buttons to navigate versus the full 12 you can take advantage of in World of Warcraft.

The buttons are stiff enough that they won't activate by mistake but not overly stiff that they require a lot in terms of pressure. But they are cluttered, so it is easier to get to the buttons on the outside versus those in the middle. Outside of that, the TrueMove Air sensor is accurate and precise, and the wireless latency is negligible. Switching genres up and playing some DOOM Eternal proved to be great, too - and having the buttons there to quickly switch between whatever weapon that isn't the Super Shotgun and the Super Shotgun is something you can easily get behind.

With so much customization, the SteelSeries Aerox 9 Wireless can double as a productivity mouse with ease, but the Honeycomb design and lack of for-comfort-only features do lead to an experience that suffers in the comfort department. You also lose out on the usual two-button setup on the side of the mouse, so if you're used to those for "back" and "forward" actions when browsing, fair warning. The SteelSeries Aerox 9 Wireless does offer up Bluetooth and wired options, with a high-quality flexible cable, so it's versatile enough to be paired with multiple devices - including Xbox consoles.

In the end, the SteelSeries Aerox 9 Wireless delivers a button-filled wireless MMO-style mouse in the style of a lightweight offering, and for that alone, there's a definite appeal. Even though we're talking about genres and styles of games that are super popular, you still need to factor in the steep learning curve and your ability to make use of all the buttons without stopping to look at what's being pressed. 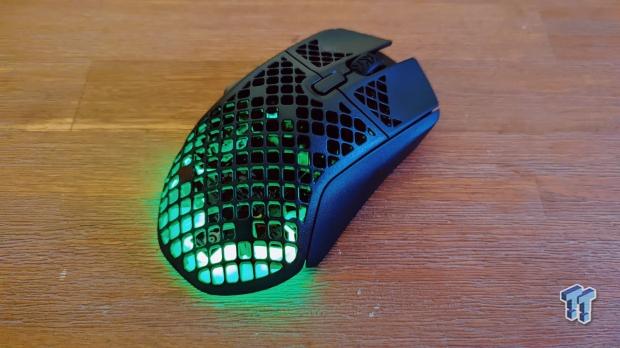 Taking advantage of its unique setup works in other styles of the game, too, like swapping weapons in an FPS, but the design is not geared toward productivity. Then there's the somewhat high price tag, which means you should be fully into playing MMOs and MOBAs before considering picking this up.

And hey, if that's you, then the SteelSeries Aerox 9 Wireless is something to consider. Wired, wireless, lightweight, and with more programmable buttons than you'll ever need.

The MMO and MOBA mouse in lightweight wireless form, the SteelSeries Aerox 9 Wireless is definitely for those that want their fair share of programmable buttons.