The evolution of the desktop PC in the 21st century really has taken us for a very quick ride in the direction of Dual Channel memory, multiple core processors as well as multiple graphics cards for better gaming performance.

Although, there is one area of technology that has really taken a back seat while the rest of the personal computer advances, that being the storage systems - that's right, the good old hard disk drive.

While the enthusiast doesn't give their hard disk much of a thought other than how much space they have to store their data, gaining performance increases here simply go unnoticed compared to that of the CPU, memory or graphics system.

The hard disk is simply the slowest part of the computer system. CPU's can transmit data in the form of gigabits per second, memory bandwidth goes over 5GB/s and graphics cards can handle data in the order of 38GB/s across its memory buses. But the trusty hard disk in most cases cannot deliver sustained data faster than about 60MB/s, simply put, going for the faster CPU isn't going to be able to speed up your load times on games if you can't get the data off the disk quickly enough.

In recent years, the advancement of the hard disk has started to become a major part of the PC industry with Serial ATA replacing the older Parallel standard that was used for over 10 years. Native Command Queuing or NCQ for short sped up the way the data is read off the drive, and now with perpendicular recording coming into the frey from companies like Seagate, we are now starting to see speed increases as much as what a magnetic recording device is capable of.

Today we have Seagate's Barracuda 7200.10 desktop drive on the test bed, the first desktop drive to support this new technology and it comes with a whooping 750GB of storage space. Could this make a great late Christmas present? Let's take a closer look! 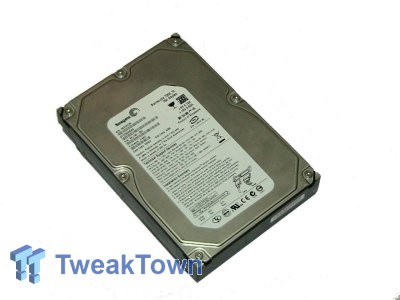 Our test drive came direct for Seagate and we were fortunate enough to get the high-end 7200.10 model with a huge 750GB storage capacity with 16MB of cache memory and supporting the fast SATA-300 transfer protocol.

All of the 7200.10 drives are available in either Parallel ATA (IDE) with ATA-100 transfer speeds or the SATA variant that support both 150 and 300MB/s transfer rates. All of the SATA drives support NCQ and Hot Swap whereas the IDE variants do not. Depending what model you buy determines the amount of cache that is included.

All of the drives support the new perpendicular recording technology that has allowed the drives to exceed their pervious storage capacity limitations as well as increase read and write speeds.

Perpendicular recording works just how it sounds. Normally a hard disk has its magnetic bits arranged in a longitudinal array, where by the bits are stored in a lateral way on the disk surface. This required 2x the mount of space to store a single bit of data. While you can reduce the size of the bit in order to increase capacity, you can only go so small that the bits begin to loose magnetic coherency when the drive is at maximum speed, causing the bit to flip, and data can become corrupted.

Perpendicular recording rotates the data bit 90 degree and stores the data bit in a vertical manner, reducing the amount of space needed on a platter to store the bit. This allows the drive to pack more data onto the drive without the need to reduce the data bit size, this is how Seagate has overcome the 500GB barrier with traditional magnetic recording. And this is not the first drive either from Seagate to use perpendicular recording. We tested a Seagate Momentus 5400.3 notebook hard disk drive not too long ago that was the first Seagate drive to take advantage of this, and when it came to the crunch, the new technology was extremely useful for notebook applications where size is important. 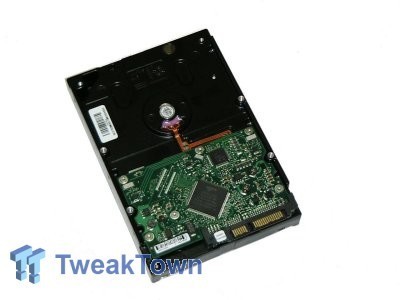 The bottom of the drive contains the PCB with all the circuitry onboard. The controller chip that makes use of the SATA-300 interface as well as the NCQ is the Agree controller chip which is one of the companies that Seagate owns. The cache memory is located on the reverse side of the PCB with a single 16MB module that are supplied by Samsung.


Today's tests are going to be performed between some of the members of the Seagate 7200 series of drives.

Here we can see that the Seagate 7200.10 manages to take a commanding lead in PCMark's Hard Disk test suite.

Surprisingly that Adobe Premiere Elements likes the faster hard disk drives for its encoding. What we first thought was only a CPU and memory intense application, the HDD also plays a major part in its encoding state. 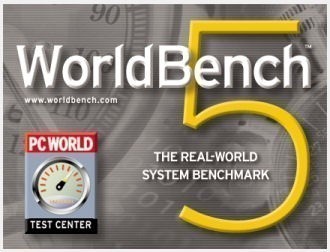 In media encoding tests the Seagate drive manage to just outscore its older brothers. When we put it into the multi tasking tests though Office, it managed to score well again. Finally the WinZip test when pure performance comes into the equation, the 7200.10 is king.

We loaded our test maps in both Half Life 2 and Doom 3. We did the tests over three attempts on each and used the average time to give a fair example. Due to the human factor, there is a slight reaction time delay because nobody is able to hit the button on the exact millisecond, however, all were right on the point of full load in each map.

There is little difference between the 7200.9 and 7200.10 in game loading times as it seems to have more pull on the system than the hard disks pure performance.

Hard Disk Drives have for the most part been what are holding systems back, and while that is still true, companies like Seagate have been working real hard on performance related problems lately.

Traditionally size has been important to the end users (especially with the introduction of such services as torrent files and so on), more gigabytes to store the data has come up more often then how fast you can access it. Now with the CPU and memory not holding the systems back, the cry for faster HDD access has started to get louder and louder.

Seagate had done a fantastic job with the Barracuda 7200.10 series in terms of performance as well as storage space - 750GB is truly a fantastic feat of engineering - and with the use of all the latest SATA technologies and the inclusion of perpendicular recording, things are only going to get better from now on for the poor old hard disk, which is definitely receives great levels of attention by Seagate.

The drive is not cheap coming in at around $400 USD (about $560 AUD in Australia) but indeed you get what you pay for. It's the only drive on the market with this massive amount of storage space and your drive is covered by Seagate's excellent customer service with 5 years warranty, which only makes the whole deal even sweeter, in our opinion. Seagate's line of 7200.10 drives is a brilliant product and come fully recommended.

- Cons
Gets a little warm at times when under full speed
Expensive but you get what you pay for!