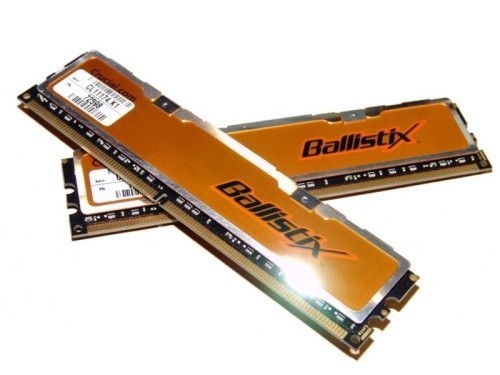 DDR-2 memory has really become the memory for the future or at least for the next couple of years. Its ability to deliver speeds well beyond the ability of the aging DDR memory standard makes it a far better option.

Every major memory company has taken DDR-2 to heart and they will want to in order to survive in the memory industry, and with Core 2 and its supporting chipsets now making high FSB overclocks, the emphasis is on high speed memory modules for gamers and overclockers.

Today we have from the Crucial labs their Ballistix PC2-8000 2GB memory kit. We will put it through its paces and see if it would make a good choice for a gaming system or overclocker. 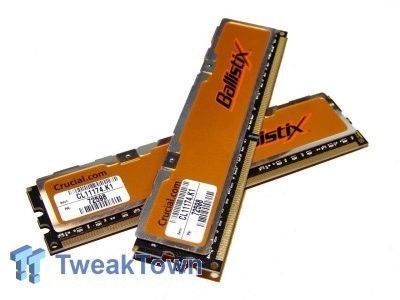 Our package arrived in a cardboard box with the Crucial sticker on the front with some basic info on the memory modules that were supplied. Our kit was the new 2GB variant with 2 x 1GB modules for Dual Channel systems. Dual Channel has been around for ages now, and has proven to be just what the doctor ordered especially for the Intel platform which can support extremely high bandwidth memory across its quad pumped FSB.

Crucial Ballistix memory modules are rated from the factory to run at speeds of 1000MHz DDR with a timing profile of 5-5-5-15, which is the highest latency set that the DDR-2 memory standard provides. These ratings are for the modules at 1000MHz, so usually if you want to run the modules at lower speeds with tighter timings, generally this is easily obtainable. The modules also are rated to a maximum voltage of 2.2v without voiding your warranty, that's a +0.4v increase over default. Most boards these days go beyond that, so if you want to go higher you will void your warranty. 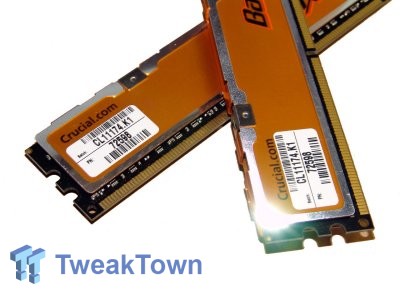 When it comes to marking on the modules, Crucial has really kept it low key - in fact, there are no actual specs of the memory speed or timing ratings. For these you need to use the model number that is printed on a small piece of sticky paper attached to the heatsink and check the Crucial website to get any relevant info on the modules.


Our memory test system makes use of the new nForce 680i chipset. We use this motherboard due to its ability to overclock the memory asynchronously to the FSB, allowing us to determine the memory's overall max rating without the CPU or other system components bottlenecking the system.

Lastly we put the memory to its max we could get out of it using SPD timings. We managed to get a maximum speed of 1102MHz DDR with the DRAM voltage at 2.4v - maximum speed at 2.2v was 1080MHz.

Let's get this show on the road and see how the Crucial memory compares against some of the latest high-end RAM from Corsair which is also at its default and maximum OC speed.

At 800MHz the Crucial and Corsair manage to score the same results as they both use the same default timing profiles.

With the timings lowered on the Crucial we see a slight increase in memory performance. At max memory clock the Corsair manages to win due to its higher clock rate at overclocked speeds.

ScienceMark 2.0 is a mathematical program designed to stress the memory subsystems of both desktop/workstation and server environments to determine the read/write latency as well as the overall memory bandwidth available between the CPU and the memory controller

ScienceMark puts the Crucial in the lead at 800MHz when the timings are lowered. At overclocked we see the Corsair modules win out.

At 800MHz, even with the lower timings, there isn't much difference here. It's not until the memory speed is increased that we see any improvement.

PREY shows a slight difference between the 800Mhz SPD and 800MHz tight timings, the lower the timings here make a difference, when the memory clock is increased we see even more FPS being produced, with the Crucial RAM only a little behind Corsair.

Lately the emphasis has been faster memory speeds over lower latencies. And as we can see here, the lower (tighter) latencies do help, but if you want to overclock your FSB to get the CPU into the equation as well, you are going to need some high clocking RAM. That is unless you are using a motherboard chipset designed for overclockers like nVidia's nForce 680i which allows unlinked overclocking of the CPU FSB and memory clock speeds. If you're using a motherboard which uses something like the Intel P965 or 975X, you'll need some DDR-2 memory which can keep up with the CPU FSB for obtaining your CPU overclock.

Crucial has been in overclocking for some time now, and the Ballistix modules do show the best of what Crucial has managed to engineer. While it's not as good as high-end modules from companies like OCZ and Corsair, it is still pretty good and managed to produce quite a decent overclock during our testing.

When we start to consider the value side of things, both cost around the same each for the 2GB kits with Crucial only being a little more expensive. This tends to make the Corsair XMS PC-8500 memory a better choice as it's rated for 1066MHz DDR (PC-8500) operation from factory whereas the Crucial is only rated to 1000MHz DDR (PC-8000) and with the extra clock speed obtained from the Corsair when overclocking, it's looking like a more attractive option in our opinion.

Overall Crucial has put its nose into the high-end memory market and have given a great product that is very worthy for the 680i series chipset but if you look into a little deeper, you might find other memory modules which are a little better value for money. Although, we still recommend the Crucial Ballistix memory because, as always, we had no issues at all with stability and customer service is always very good at Crucial.


- Pros
Fast, rock solid and looks good
Does tight timings at 800MHz whereas Corsair doesn't like it as much
Supports EPP for nForce motherboards
Overclocking up to 1102MHz at 2.4 volts