Coolest looking M.2 SSD on the planet.
Buy at Amazon

Back in February, we had the pleasure of reviewing Patriot's P400 1TB. The drive was the second of its kind to come through the lab controlled by InnoGrit's DRAMless IG5520 four-channel controller and arrayed with Micron 176 Layer B47R flash. Beginning with the ATOM 50 this exact hardware combo completely changed our view of DRAMless SSD. It was the first DRAMless SSD capable of delivering performance equivalent to DRAM-equipped enthusiast SSDs.

The SSD we have the spotlight on today is another Patriot DRAMless offering, but this time it's not a plain-looking value type offering like the P400. This SSD is the first of its kind M.2 x2280 with addressable RGB lighting. Patriot is selling the new VPR400 under its gaming brand Viper. The Viper VPR400 we are examining today appears to be a P400 outfitted with an ARGB heat sink.

The Viper VPR400, like the P400 before it, is an InnoGrit IG5220 controlled DRAMless SSD arrayed with Micron 176L B47R flash. A known potent hardware combination. However, a close comparison of factory specs between the two Patriot offerings reveals there are some significant differences in both performance and warranty period. The P400 carries a 3-year factory warranty, and the VPR400 has a 5-year warranty. The P400 is factory rated for up to 5,000 MB/s sequential reads and up to 4,800 MB/s sequential write throughput. Curiously, the VPR400 is factory rated for up to 4,600 MB/s read, 4,400 MB/s write throughput. So, 400 MB/s lower sequential throughput respectively. In a nutshell, it's slower but warranted for 2-years longer.

Humm, why would apparently the same hardware combo deliver less performance while having a longer warranty period? To us, this sounds like a difference in flash speeds. Micron's B47R flash comes in different grades and can be programmed to run at different speeds. Commonly we encounter Micron's B47R running at 1,200MT, but sometimes we see it running at 1,600MT. Typically SSDs running at 1,200MT carry a higher TBW rating than those running 1,600MT. An example of this would be Seagate's FireCuda 530 arrayed with 1,200MT B47R flash vs. Kingston's KC3000 arrayed with 1,600MT B47R flash.

We believe this is where the differences in performance and warranty period between the P400 and VPR400 stem from. Now, this is purely speculation on our part, but every benchmark we ran seems to suggest this to be the case. Sequential performance is the same, but workload performance is markedly better on the P400 than on the VPR400. Exactly as it is with the FireCuda 530 vs. KC3000, 1,200 MT flash vs. 1,600 MT flash.

The good news is that although slightly slower than the P400, the Viper VPR400 is still plenty fast, carries a longer warranty period, and brings the bling where it's never been before. 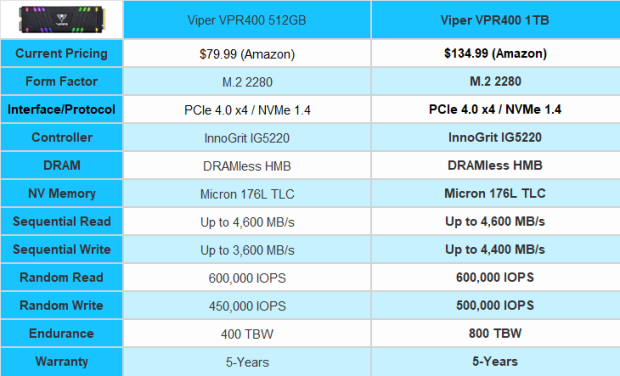 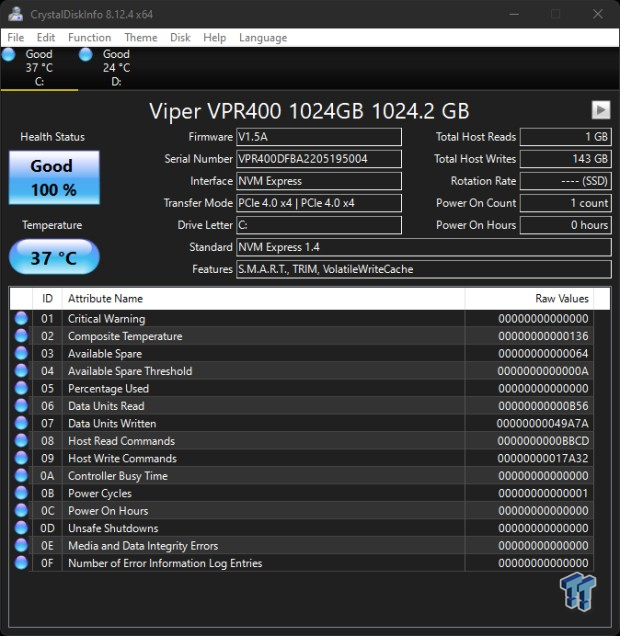 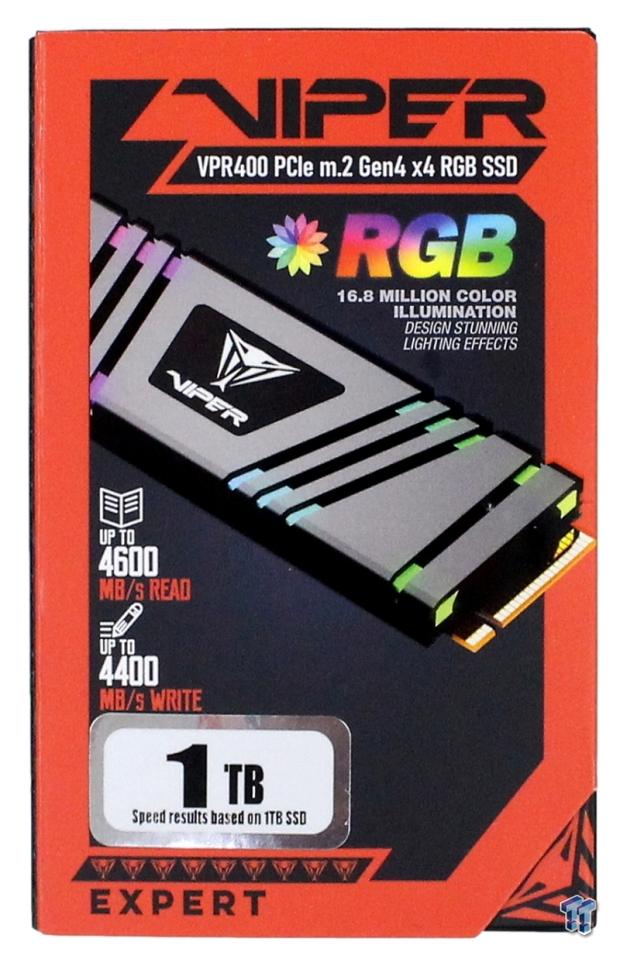 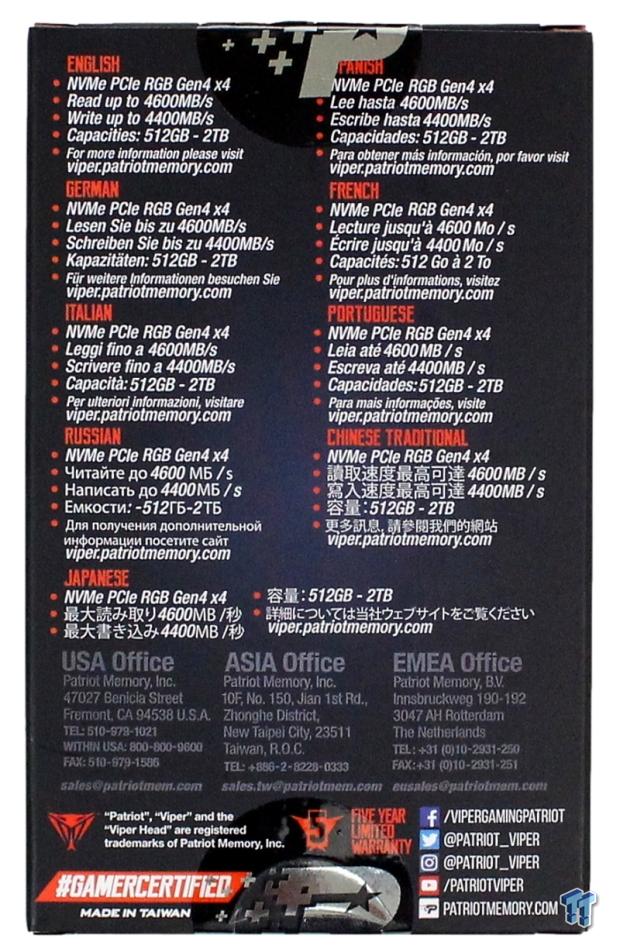 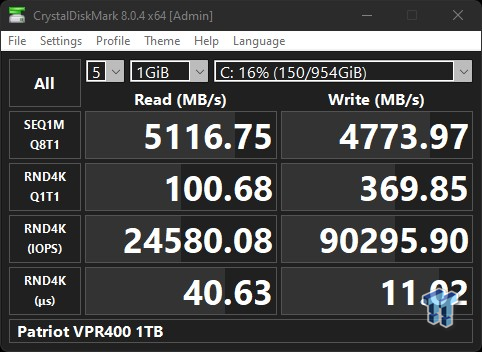 Our sequential read chart has all the SSDs featuring an IG5220 controller stacked up one on top of the other. VPR400, FX900, ATOM 50, and P400. Interestingly enough, we see the VPR400 taking the top spot for sequential read throughput. Sequential writes come up just the opposite, with the VPR400 coming in last between the four similarly configured SSDs. 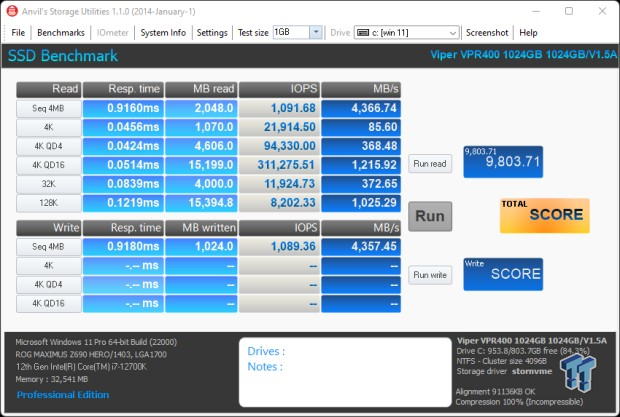 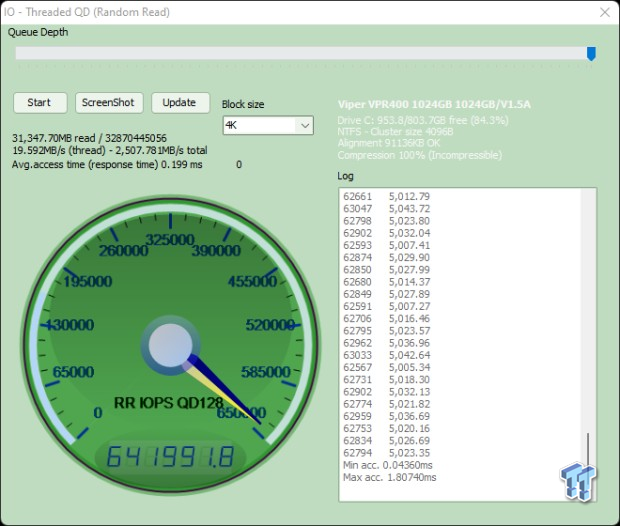 Overall, the VPR400 delivers a stout read score here, equivalent to what we get from E18-controlled SSDs arrayed with 96L flash. Impressive for a 4-channel DRAMless SSD. Max random read IOPS is also impressive and better than we expected, coming in higher than the P400, but well below the FX900 and ATOM 50, both of which are arrayed with 1,600MT flash. 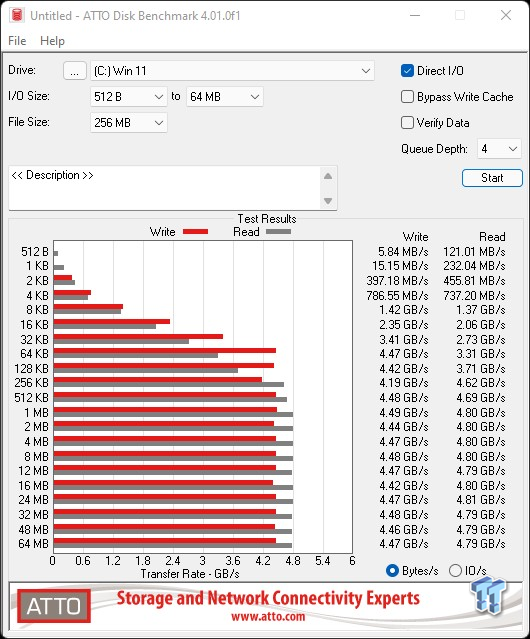 Sequential performance comes in at higher-than-expected levels, but again this is not where performance differences between 1,200MT and 1,600MT flash manifest. 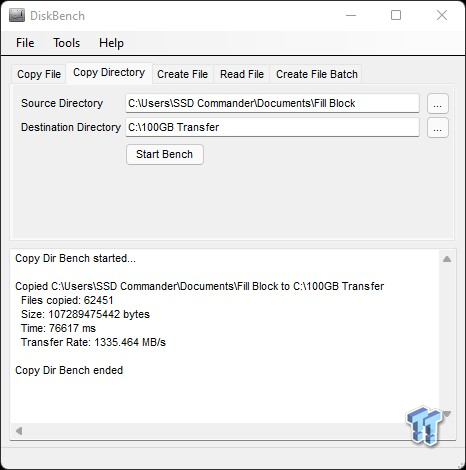 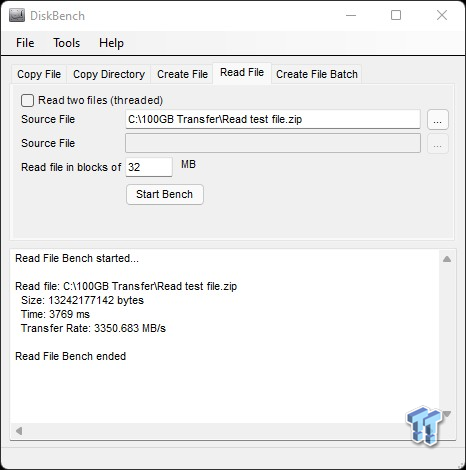 This is actually a very large sequential read, so it's not surprising that VPR400 keeps up with the other IG5220-controlled SSDs, even though we suspect those are arrayed with faster flash. The next three benchmarks are actual workloads, so we should start to see a performance gap between 1,200MT and 1,600MT arrays become clearly defined. 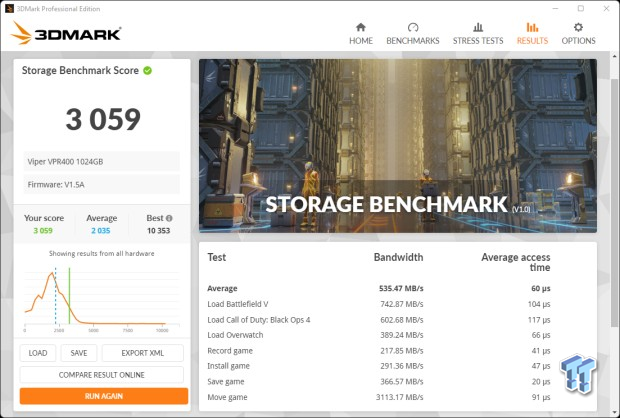 Gaming is a performance metric that matters to the majority of DIY consumers, especially to the enthusiast crowd that TweakTown caters to. Okay, here we have the VPR400 coming in as much as 9.1% lower than similarly configured SSDs sporting faster flash. 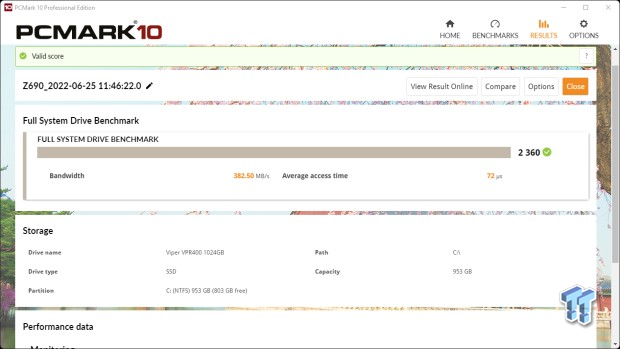 We consider the outcome of this test to be proof positive that the VPR400 is arrayed with slower 1,200MT B47R flash than the other IG5220-controlled SSDs on our chart. The ATOM 50 scores a whopping 845 points more than the VPR400. 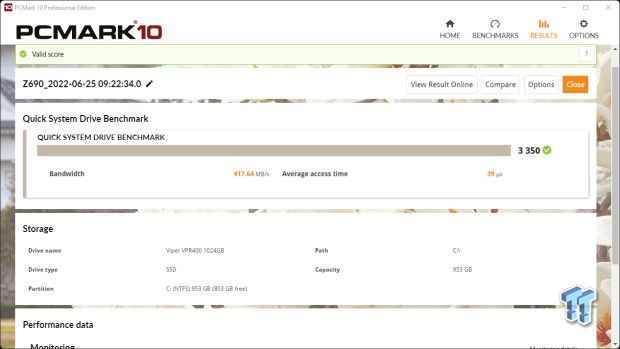 Still significant, but not as much of a gap here, but that is expected because there is far less programming (writing) with this test than the full test.

So overall, the VPR400 is the slowest of the IG5220-controlled SSDs we've tested. However, it's still what we would consider an excellent choice for OS duties. Additionally, and our photos don't do it justice, this thing looks awesome with its ARGB lighting pulsing away. In fact, we find the VPR400 so cool looking and unique that we can overlook its performance weaknesses because it's still a reasonably fast SSD while at the same time being a supreme bringer of bling.

We rank SSDs in terms of overall user experience (performance where it matters most) as expressed by PCMark 10 storage and 3DMark gaming storage tests. We consider a user experience score of 11K or more to verify an SSD as a TweakTown Elite performer. There was never any chance of the VPR400 earning recognition as a TweakTown Elite performer; no IG5220 controlled SSD has come close. 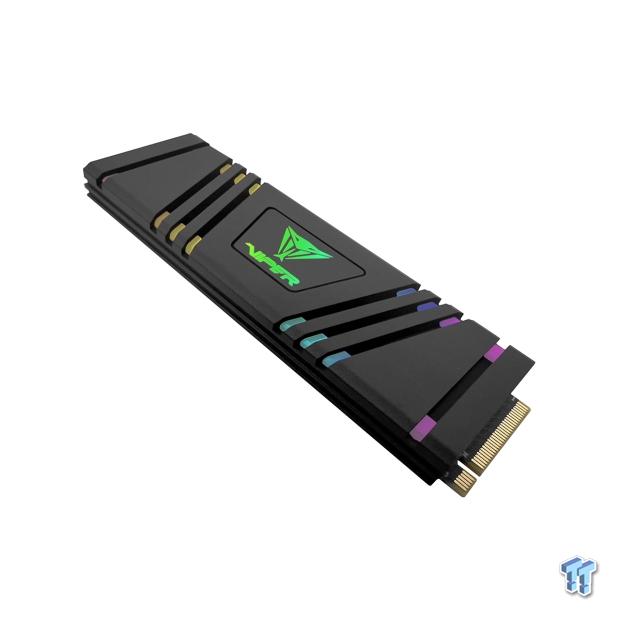 While not the fastest around, it's fast enough and the coolest-looking M.2 SSD on the planet. The Patriot Viper VPR400 is TweakTown approved and worthy of one of our highest awards.