Electronic Arts Inc. (NASDAQ: EA) today announced that EA SPORTS FIFA 16*, chosen Best Sports Game by E3 2015 Game Critics, delivers New Ways to Play in its two most popular modes: FIFA Ultimate Team (FUT) and Career Mode. FIFA Ultimate Team introduces FUT Draft, a brand new way for fans to test their team building skills and compete with some of the best football players in the world. And this season, Career Mode adds two features most requested by fans: Pre-season Tournaments and Player Training that ensure an even deeper and more authentic career whether fans play as a manager or a pro. 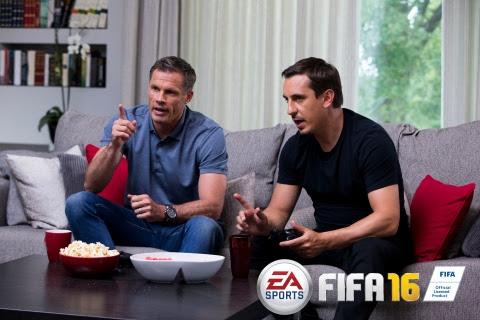 In FIFA Ultimate Team Draft, fans can compete in single player or online** in a single knockout string of four games to achieve rewards - the more games won, the better the reward to utilize in your FUT Club. Once fans enter a Draft using virtual coins, FIFA Points, or a Draft Token, they will choose from one of five formations, then a captain, and then go on to fill out the rest of their 23-man squad by selecting a player from a choice of five in each position. Fans will be tested as they choose between picking the best players and creating a team with the right chemistry before they enter their games. See FUT Draft in action as two of England's top football pundits, Jamie Carragher and Gary Neville play the all new mode: here.

"We are delivering unprecedented depth and innovation to the franchise this season by bringing several new ways to play across Career Mode, Ultimate Team, and through the introduction of twelve Women's National Teams," said David Rutter, VP and GM, EA SPORTS FIFA. "We think fans are going to be equally as excited with all the new ways as they have been with the gameplay in FIFA 16. From hands-on gameplay events across the world, we've heard resoundingly positive feedback on the balanced and exciting experience we are building in FIFA 16."

FIFA 16 delivers Innovation Across the Entire Pitch in gameplay highlighted by No Touch Dribbling and Clinical Finishing, two new features sure to provide Moments of Magic in the final third. To balance against attacking players, defenders now move as a unit with new positioning and 25 feature changes to their locomotion, ensuring they stay with attackers and give fans Confidence in Defending. Arguably the most important part of the pitch, the middle of the park is where matches are won and lost, and FIFA 16 encourages fans to gain Control in Midfield with Passing with Purpose and Interception Intelligence, two revolutionary features that elevate the battle for possession and balance gameplay. Goalkeepers have also been improved with new save animations and authentic positioning.

Rich and authentic football narrative in FIFA 16 is driven by hours of new commentary, new commentators in German and Russian, and more than 900 new real chants sung in stadiums across the globe. BORRUSSIA-PARK in Mönchengladbach, El Monumental in Buenos Aires, and CenturyLink Field in Seattle make up three of the nine stadiums making their debut in FIFA 16, taking the total to more than 70 stadia in game. And the German Bundesliga gets an authentic presentation package in FIFA 16 synonymous with the league's television broadcast visuals, including score graphics, team sheets, and player analysis.

FIFA Ultimate Team also adds new broadcast presentation to give fans a unique experience from game-to-game. Dynamic commentary in FUT will now have commentators reacting to the stats and history of your club. FIFA 16 also sees the arrival of Legends Chemistry, which will increase chemistry links between legends and squad players, and eight new FIFA Ultimate Team Legends, only on Xbox.

In Career Mode, Pre-season Tournaments will help managers grow transfer budgets and get their team in good form ahead of competition that counts. Managers will select from three of nine tournaments presented at the start of each season before jumping into their domestic campaign. Player Training will assist in the development of youth and squad players in between matches. Fans will select from more than 30 drills and put up to five players through their paces to improve faster. This opens up new ways to play, especially for those managers looking to develop youth players and transfer them to other clubs.

The all new FIFA Trainer helps all fans Compete at a Higher Level by utilizing an optional, ground-breaking in-game training system which uses the context of the game to display controller options to the player. The trainer options will progress as the level of the trainer increases, which can be set to automatic or controlled manually.

A trailer showcasing the new season of FIFA 16 can be viewed: here.

For more information about EA SPORTS FIFA 16 visit www.easports.com/fifa or join the EA SPORTS community at http://www.Facebook.com/easportsfifa. Follow us on Twitter @easportsfifa and use the hashtag #FIFA16. The game is rated E for Everyone by the ESRB.

*Not all features available on all gaming platforms.