Worldwide PC shipments totaled 76.3 million units in the first quarter of 2013 (1Q13), down -13.9% compared to the same quarter in 2012 and worse than the forecast decline of -7.7%, according to the International Data Corporation (IDC) Worldwide Quarterly PC Tracker. The extent of the year-on-year contraction marked the worst quarter since IDC began tracking the PC market quarterly in 1994. The results also marked the fourth consecutive quarter of year-on-year shipment declines.

Despite some mild improvement in the economic environment and some new PC models offering Windows 8, PC shipments were down significantly across all regions compared to a year ago. Fading Mini Notebook shipments have taken a big chunk out of the low-end market while tablets and smartphones continue to divert consumer spending. PC industry efforts to offer touch capabilities and ultraslim systems have been hampered by traditional barriers of price and component supply, as well as a weak reception for Windows 8. The PC industry is struggling to identify innovations that differentiate PCs from other products and inspire consumers to buy, and instead is meeting significant resistance to changes perceived as cumbersome or costly. 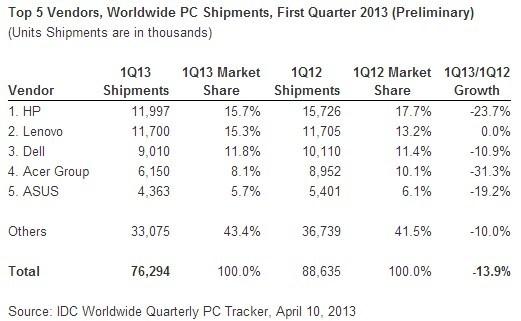 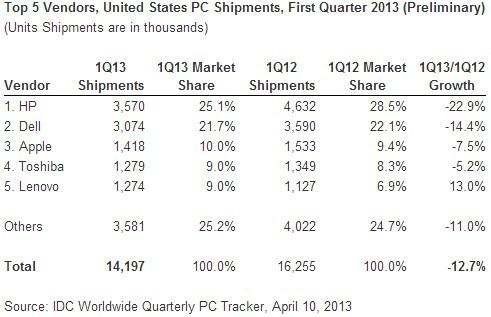 "At this point, unfortunately, it seems clear that the Windows 8 launch not only failed to provide a positive boost to the PC market, but appears to have slowed the market," said Bob O'Donnell, IDC Program Vice President, Clients and Displays. "While some consumers appreciate the new form factors and touch capabilities of Windows 8, the radical changes to the UI, removal of the familiar Start button, and the costs associated with touch have made PCs a less attractive alternative to dedicated tablets and other competitive devices. Microsoft will have to make some very tough decisions moving forward if it wants to help reinvigorate the PC market."

The impact of slow demand has been magnified by the restructuring and reorganizing efforts impacting HP and Dell. Lenovo remains a notable exception as it continues to execute on a solid "attack" strategy. Mid- and bottom-tier vendors are also struggling to identify growth markets within the U.S. Among the most vulnerable group of vendors are the whitebox system builders, which are undergoing consolidation that is affecting shipments as well as the distribution sector.

"Although the reduction in shipments was not a surprise, the magnitude of the contraction is both surprising and worrisome," said David Daoud, IDC Research Director, Personal Computing. "The industry is going through a critical crossroads, and strategic choices will have to be made as to how to compete with the proliferation of alternative devices and remain relevant to the consumer. Vendors will have to revisit their organizational structures and go to market strategies, as well as their supply chain, distribution, and product portfolios in the face of shrinking demand and looming consolidation."