Worldwide PC shipments totaled 89.8 million units in the fourth quarter of 2012 (4Q12), down 6.4% compared to the same quarter in 2011 and worse than the forecasted decline of 4.4%, according to the International Data Corporation (IDC) Worldwide Quarterly PC Tracker. Although the quarter marked the beginning of a new stage in the PC industry with the launch of Windows 8, its impact did not quickly change recently sluggish PC demand, and the PC market continued to take a back seat to competing devices and sustained economic woes. As a result, the fourth quarter of 2012 marked the first time in more than five years that the PC market has seen a year-on-year decline during the holiday season.

The lackluster fourth quarter results were not entirely surprising given the spate of challenges the PC market faced over the course of 2012. IDC had expected the second half of 2012 to be difficult. Consumers as well as PC vendors and distribution channels continued to be diverted from PC sales by ongoing demand for tablets and smartphones. In addition, questions about the use of touch on Windows PCs vs. tablets slowed commercial spending on PCs. 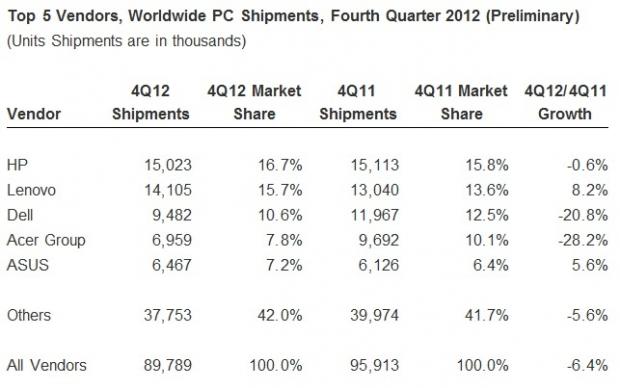 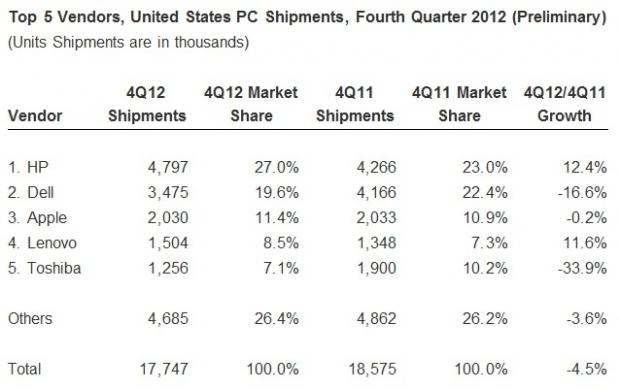 "Although the third quarter was focused on the clearing of Windows 7 inventory, preliminary research indicates the clearance did not significantly boost the uptake of Windows 8 systems in Q4," said Jay Chou, senior research analyst with IDC's Worldwide Quarterly PC Tracker. "Lost in the shuffle to promote a touch-centric PC, vendors have not forcefully stressed other features that promote a more secure, reliable and efficient user experience. As Windows 8 matures, and other corresponding variables such as Ultrabook pricing continue to drop, hopefully the PC market can see a reset in both messaging and demand in 2013." 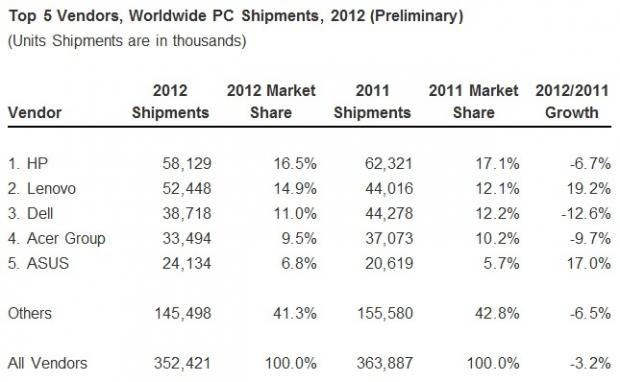 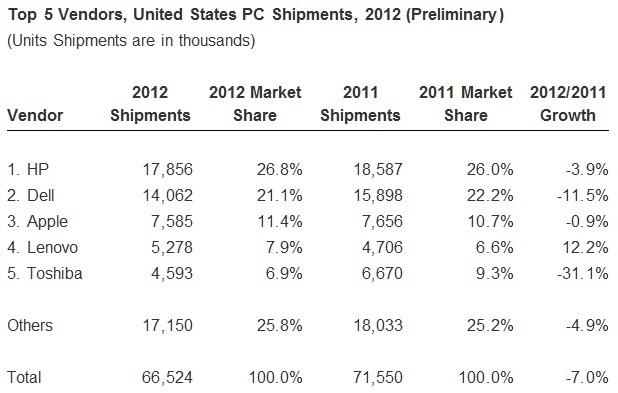 "As anticipated, the U.S. market had a rough ending, dropping 4.5% in the fourth quarter and contributing to a decline of 7% for the full year 2012," said David Daoud, research director, IDC U.S. Quarterly PC Tracker. "Consumers expected all sorts of cool PCs with tablet and touch capabilities. Instead, they mostly saw traditional PCs that feature a new OS (Windows 8) optimized for touch and tablet with applications and hardware that are not yet able to fully utilize these capabilities. Despite a generally weak performance, some leading brands managed do to well relative to the market. HP, Lenovo, Asus, and Samsung were among the top performers, taking advantage of some consumer interest in Windows 8, and a push to build up their presence ahead of 2013."

United States - The U.S. market struggled in the fourth quarter of 2012, although to a lesser extent than expected given the channel replenishment activity that occurred in December. Some consumer activity took place in conjunction with the release of Windows 8. However, limitations in product offerings, in particular for touch screen Tablet PCs, led consumers to once again delay purchases. Consumer-focused vendors like HP and Asian majors like Lenovo, Asus, and Samsung managed strong performances, partly in response to modest consumer demand, and partly due to channel activity in December ahead of the anticipated 1H13 Windows 8 push. The rest of the industry continued to take a wait-and-see approach as consumer attitudes toward Windows 8 are clarified.

EMEA - The EMEA PC market performed in line with expectations in 4Q12, with shipments declining at a mid single-digit rate from a year ago. Although sell-in of Windows 8 systems accelerated by early December, helped by the new Ultra Slim offerings, consumers continued to shun PC purchases in favor of attractively priced tablets and smartphones, particularly during the end-of-year Christmas season. Commercial purchases also remained weak, softened by persisting uncertainty in the economic situation across the region.

Japan - Japan registered growth that was slightly positive, but still several points below forecast. Consumer demand was expected to be weak as the first batch of Windows 8 machines was markedly more expensive than previous generation models. However, the impending ending of Windows XP support helped to boost commercial volume, where companies have been steadily upgrading to Windows 7 for the past several quarters.

Asia/Pacific (excluding Japan) - The Asia/Pacific region came in slightly below forecasts, as channels in most countries focused on clearing out existing Windows 7 inventory before bringing in fresh Windows 8 stock. China was not too far off target, though ongoing sluggishness in the economy as well as a slowdown in public sector projects kept the PC market there suppressed this quarter.

HP continued to defend its top position in IDC's worldwide ranking, recovering somewhat from past weakness in key markets. An aggressive push for Windows 8 volume helped the vendor make gains in Asia/Pacific and its home turf in the U.S. HP struggled in EMEA but posted the first year-over-year growth in Asia/Pacific in four quarters. Total volume was nearly flat from a year ago, but better than the overall market.

Lenovo outpaced the market with growth of over 8%. Volume reached a new record-high of more than 14 million units, with continued success in channel wins in the U.S. and EMEA. Despite the positive performance, Lenovo's gains remained significantly smaller than several quarters ago when the company was besting market growth by nearly 30%.

Dell continued to lose ground as it faces aggressive competition from other leaders and looks for better margins. Worldwide shipments were down over 20% year over year - faster than declines over the past several years - with U.S. volume declining almost as much. The firm did manage sequential growth in most other markets.

Acer Group, like a few other vendors, remains heavily dependent on consumer spending. As a result, it has continued to suffer as consumers focus on other products. At the same time, Acer's cautious approach to the Windows 8 transition has contributed to slower notebook shipments.

ASUS held onto its top 5 spot globally and stretched the distance between itself and other consumer-focused vendors with growth of 5.6% year on year. The firm racked-up strong gains across many regions, where its often innovative yet price-conscious offerings still managed to take root in spite of an increasingly tough landscape.