The European Commission has fined seven international groups of companies a total of € 1,470,515,000 for participating in either one or both of two distinct cartels in the sector of cathode ray tubes ("CRT"). For almost ten years, between 1996 and 2006, these companies fixed prices, shared markets, allocated customers between themselves and restricted their output.

One cartel concerned colour picture tubes used for televisions and the other one colour display tubes used in computer monitors. The cartels operated worldwide. The infringements found by the Commission therefore cover the entire European Economic Area (EEA). Chunghwa, LG Electronics, Philips and Samsung SDI participated in both cartels, while Panasonic, Toshiba, MTPD (currently a Panasonic subsidiary) and Technicolor (formerly Thomson) participated only in the cartel for television tubes. Chunghwa received full immunity from fines under the Commission's 2006 Leniency Notice for the two cartels, as it was the first to reveal their existence to the Commission. Other companies received reductions of their fines for their cooperation in the investigation under the Commission's leniency programme.

Commission Vice President in charge of competition policy Joaquín Almunia said: "These cartels for cathode ray tubes are 'textbook cartels': they feature all the worst kinds of anticompetitive behaviour that are strictly forbidden to companies doing business in Europe. Cathode ray tubes were a very important component in the making of television and computer screens. They accounted for 50 to 70% of the price of a screen. This gives an indication of the serious harm this illegal behaviour has caused both to television and computer screen producers in the EEA, and ultimately the harm it caused to the European consumers over the years".

The two CRT cartels are among the most organised cartels that the Commission has investigated. For almost 10 years, the cartelists carried out the most harmful anti-competitive practices including price fixing, market sharing, customer allocation, capacity and output coordination and exchanges of commercial sensitive information. The cartelists also monitored the implementation, including auditing compliance with the capacity restrictions by plant visits in the case of the computer monitor tubes cartel.

Top management level meetings, dubbed "green(s) meetings" by the cartelists themselves because they were often followed by a golf game, designed the orientations for the two cartels. Preparation and implementation were carried out through lower level meetings, often referred to as "glass meetings", on a quarterly, monthly, sometimes even weekly basis. Meetings were held in various locations in Asia (Taiwan, Korea, Japan, Malaysia, Indonesia, Thailand, Hong Kong, etc.) and Europe (Amsterdam, Budapest, Glasgow, Paris, Rome). The cartels operated worldwide.

Multilateral meetings usually started with a review of demand, production, sales and capacity in the main sales areas, including Europe; then prices were discussed, including for individual customers, i.e. TV and computer manufacturers. They had therefore a direct impact on customers in the European Economic Area (EEA), ultimately harming final consumers. The cartelists were trying to address the decline of the CRT market in a collusive way, to the detriment of consumers. For example, one document recording the cartel discussions spells out clearly: "producers need to avoid price competition through controlling their production capacity".

The investigation also revealed that the companies were well aware they were breaking the law. For instance, in a document found during the Commission's inspections, a warning goes as follows: "Everybody is requested to keep it as secret as it would be serious damage if it is open to customers or European Commission". The participants were therefore taking precautions to avoid being in possession of anticompetitive documents. Some documents spelled out, for example: "Please dispose the following document after reading it".

In setting the level of fines, the Commission took into account the companies' sales of the products concerned in the EEA, the very serious nature of the infringement, its geographic scope, its implementation and its duration. If Chunghwa had not received full immunity, its fines would have been € 8 385 000 for the TV tubes cartel and € 8 594 000 for the computer monitor tubes cartel. Samsung SDI, Philips and Technicolor received reductions of fines ranging from 10 to 40% for their cooperation under the Commission's leniency programme. The reductions reflect the timing of their cooperation and the extent to which the evidence they provided helped the Commission to prove the respective cartels. One of the companies invoked its inability to pay the fine. The Commission assessed this claim under point 35 of the 2006 fines Guidelines and granted a reduction of the fine.

The fines imposed are as follows: 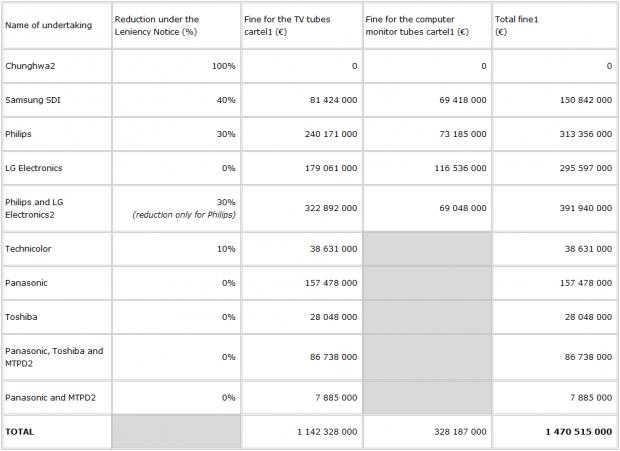