Since 2009, Microsoft has been working hard on providing the next era of Microsoft operating systems, Windows 8. The newest edition from Microsoft is scheduled to be released on October 26th, promises to increase performance, functionality, and productivity in many forms of added features and support. As part of AVADirect's mission to provide the latest and greatest hardware, AVADirect also aims to provide the latest and greatest of Microsoft operating systems available. Currently, AVADirect prominently offers Windows 7 versions, and Linux pre-load options with limited support. End-users can take advantage of the pre-order immediately and be one of the first to receive a pre-installed Windows 8 desktop, workstation, or notebook. 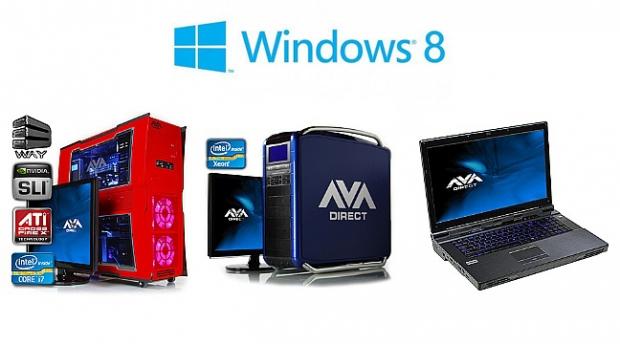 With a newly designed graphical user interface, Microsoft hopes to change the way we use our PCs with Windows 8. After spending a few minutes with Windows 8, it's obvious that interface is moving in the direction of mobile and touch-screen devices. This is great, when preparing for the future, however many would argue it has no place for dedicated desktops or workstation. To balance this argument, Microsoft has added new features to the desktop & shell, added integrated online services, a plethora of fresh applications, and services such as SkyDrive which allows you to sync various data with other PCs running Windows 8. Other features, which have become popular amongst PC users, such as the Windows Start menu, Microsoft Gadgets, Aero, Windows Media Center, and command bar are no longer existent. Microsoft has also removed all technical data during a "Blue Screen of Death" occurrence, making the operating system more mainstream and less reliant on technical-savy end-users.

While AVADirect is accepting pre-orders for Windows 8, orders placed a week prior to release may be delayed by 3-4 days, depending on AVADirect's receipt of Windows 8 shipments. Should you have any questions, AVADirect welcome phone calls and emails regarding the release of Windows 8.

AVADirect is a privately owned custom computer manufacturer based in Twinsburg, Ohio, (within close proximity to Cleveland) specializing in the design, engineering and manufacturing of personalized high performance computer systems. The systems span the spectrum from Windows or Linux manageable and highly-reliable servers, to high-end workstations and gaming systems, to business PC's, notebooks and barebones systems and parts, focused on the commitment to meet the everyday demands of the marketplace, while creating a footprint within the industry.