AMD today announced the launch of AMD AppZone, an online showcase for applications and games accelerated by AMD Radeon graphics processing units (GPUs) and AMD accelerated processing units (APUs). In addition to featuring some of the most recognizable PC games and productivity apps, consumers can now download and seamlessly run popular Android apps on AMD-based PCs running Windows thanks to a collaboration with BlueStacks to enable the AMD AppZone Player.

Powered by BlueStacks' award-winning technology, the AMD AppZone Player brings thousands of Android apps to the millions of AMD-powered tablets, notebooks, all-in-one and desktop PCs worldwide. In addition, consumers can automatically sync their AppZone apps with Android-based devices via BlueStacks Cloud Connect, a cloud-based service that enables a Windows-based PC to become an extension of an Android mobile device and vice versa. 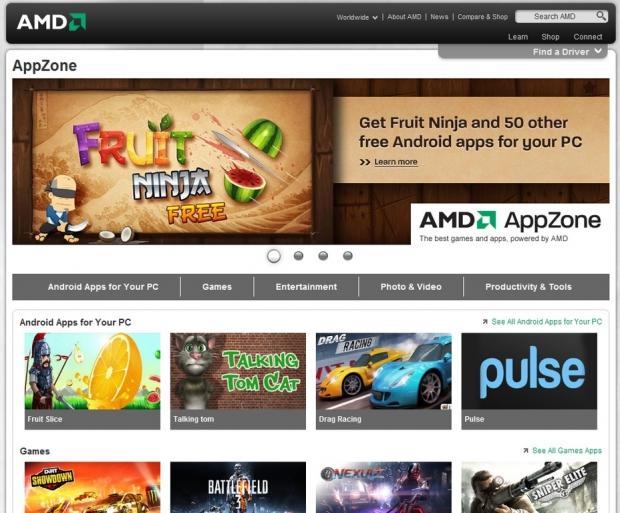 "BlueStacks' cross-platform innovation bridges the Android and x86 application ecosystems, providing new opportunities for developers and better experiences for users," said Manju Hegde, corporate vice president, Heterogeneous Applications and Developer Solutions at AMD. "By collaborating with BlueStacks, we are enabling software developers to more easily tap into the full capabilities of AMD's products, and providing millions of consumers with great experiences as they can now run Android apps on AMD-powered devices."

"As the engine behind the AMD AppZone Player, we are providing a potent combination of award-winning software optimized for AMD's industry-leading hardware. Consumers can now enjoy their favorite mobile apps on the larger, more immersive screen of their PC," said Rosen Sharma, CEO of BlueStacks. "With BlueStacks technology, app developers can rest assured their Android apps will run directly on Windows without any code change. We've made it easy for all."

Starting today, the AMD AppZone Player and featured apps like Sleeping Dogs, Adobe Photoshop CS6, and CyberLink PowerDirector 11 are available for download at www.amd.com/appzone or via the VISION Engine Control Center, which will be updated regularly to bring new titles like the highly anticipated Medal of Honor Warfighter2. Users can download featured apps directly from within the AMD AppZone Player or search for apps across the built-in app store. In addition, AMD and BlueStacks are currently working with leading OEMs to preload the AppZone Player on upcoming AMD-powered devices.