AMD (NYSE: AMD) today announced the availability of three pioneering innovations that firmly cement the company as the leader in fabric computing, micro servers and data center technology. The first innovation is a new chassis, AMD's SeaMicro SM15000 server, which extends fabric-based computing across racks and aisles of the data center to connect to massive disk arrays supporting over five petabytes of storage capacity. In addition, AMD is announcing a new generation of compute cards for its industry-leading micro servers based on AMD Opteron and Intel Xeon "Ivy Bridge" processors. These innovations continue the AMD tradition of providing industry-leading density, power efficiency and bandwidth for tomorrow's data center. (For a full description, please see the companion release: "AMD Extends Leadership in Data Center Innovation - First to Optimize the Micro Server for Big Data.") 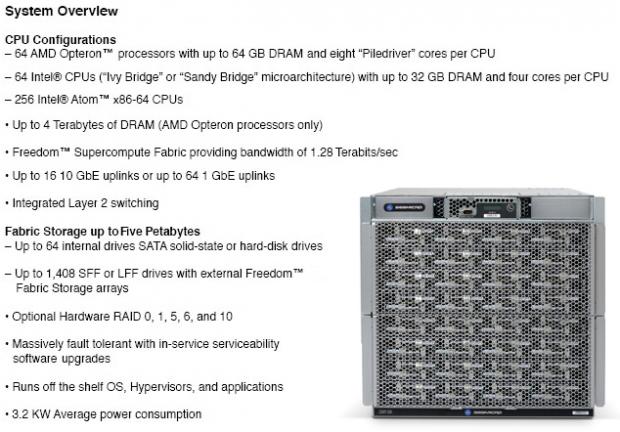 "We continue to drive innovation to meet the changing needs of the data center. The rise of virtualization, cloud computing, and big data require a new generation of compute in which networking and storage are equal partners in the solution. This does not fit the mold of traditional servers," said Andrew Feldman, general manager and corporate vice president of the Data Center Server Solutions group, AMD. "We are at the beginning of a new wave of computing that requires data centers to become pools of computing and storage resources with the flexibility to expand in both dimensions. The SM15000 system removes the constraints of traditional servers and allows data centers to expand compute, networking and storage independently. By supporting the newest generation of processors, the SM15000 server will continue our tradition of being the highest-density, and most power efficient micro server in the market."

The SeaMicro SM15000 micro server, with its patented Freedom Fabric, enables the disaggregation of data center infrastructure. In combination with the newest generation of processors from AMD and Intel, it provides the highest performance-per-watt, the highest

compute density and highest storage density, as well as the most bandwidth-per-unit compute of any micro server.

Micro servers are dense, hyper-efficient systems in which the compute, storage, and networking are linked by a fabric which enables them to share common infrastructure components. AMD pioneered this technology and has repeatedly been first to market with innovations and optimizations for the rapidly growing data center market. Today's announcements continue this trend.

"AMD is building on its architectural advantages," said Charles King, president and principal analyst at Pund-IT. "The foundational innovations, particularly around the Freedom Fabric, should allow the company to develop best-in-class solutions, change processors and extend their vision to innovative storage solutions. In many ways, this marks the true test of the value of the Freedom Fabric technology. If this new generation of processors delivers on its promises, AMD will qualify as a leader in time to market, innovation and vision."

AMD's SeaMicro SM15000 system with the Intel Xeon Processor E3-1260L ("Sandy Bridge" microarchitecture) is now generally available in the U.S and in select international regions. Configurations based on the AMD Opteron processor and Intel Xeon Processor E3-1265Lv2 ("Ivy Bridge" microarchitecture) will be available in November 2012. More information on the revolutionary SeaMicro family of servers can be found at www.seamicro.com.