Seagate Technology plc today reported financial results for the quarter and fiscal year ended June 29, 2012. During the fourth quarter, on a GAAP basis the company reported revenue of approximately $4.5 billion, gross margin of 33.1%, net income of $1.0 billion and diluted earnings per share of $2.37. On a non-GAAP basis, which excludes the net impact of certain items, Seagate reported gross margin of 33.6% and diluted earnings per share of $2.41. 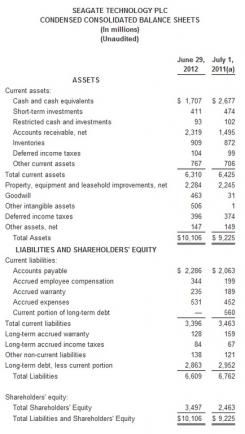 For the fiscal year ended June 29, 2012, on a GAAP basis Seagate reported revenue of $14.9 billion, gross margin of 31.4%, net income of $2.9 billion and diluted earnings per share of $6.49. On a non-GAAP basis, the company reported gross margin of 31.7% and diluted earnings per share of $6.75. In fiscal year 2012, Seagate returned over 85% of its operating cash flow to shareholders in the form dividends and share redemptions. 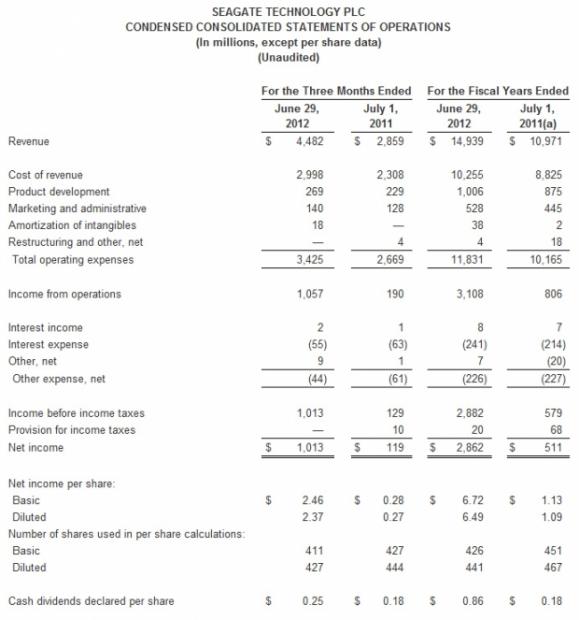 "As we announced previously, we were disappointed not to meet our revenue and margin plan for the fourth quarter as a result of the industry's faster recovery from the supply chain disruption and an isolated supplier issue that we experienced," said Steve Luczo, Seagate chairman and chief executive officer. "Nevertheless, we are pleased to have achieved record revenue and unit shipments for the June quarter, which enabled Seagate to continue to return significant value to shareholders through dividends and share repurchases."

For a detailed reconciliation of GAAP to non-GAAP results, see accompanying financial tables. 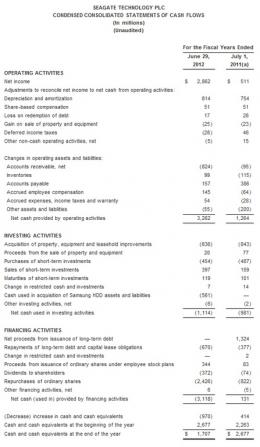 The Board of Directors has approved a quarterly cash dividend of $0.32 per share, which will be payable on August 29, 2012 to shareholders of record as of the close of business on August 14, 2012. The payment of any future quarterly dividends will be at the discretion of the Board and will be dependent upon Seagate's financial position, results of operations, available cash, cash flow, capital requirements and other factors deemed relevant by the Board.

Seagate management will hold a public webcast today at 2:00 p.m. Pacific Time on its Investor Relations website at www.seagate.com/about/investors. During today's conference call, the company will provide an outlook for its first fiscal quarter of 2013 and its view of the remainder of the calendar year, including key underlying assumptions. Seagate is planning an investor and analyst meeting on September 21, 2012 to discuss the Company's longer-term strategic plan.