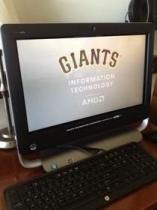 "Our technology partnership with the San Francisco Giants puts AMD in a great position to showcase the role AMD technology can play to help large organizations harness the trends around consumerization, the Cloud and convergence to drive their business," said Lisa Su, senior vice president and general manager, AMD Global Business Units. "From powering the front office infrastructure to the luxury suite experience at AT&T Park, AMD is ready to be a technology clean-up hitter for the Giants and their fans."

The Giants are presently using AMD technology to empower fans at AT&T Park to vote their favorite players into the National League's starting line-up for the upcoming MLB All-Star game on July 10. AIO desktops with touchscreens in all of the ballpark suites will be linked to the online MLB All-Star ballot allowing fans to quickly vote for their favorite Giants players.

"We are excited to have AMD power the technology behind the team," said Bill Schlough, chief information officer, San Francisco Giants. "Much like the Giants, AMD is committed to innovation. We believe AMD technology will position the Giants to build upon our winning on the field while continuing to deliver the ultimate fan experience at AT&T Park."

In addition to the AIO desktops in the luxury suites, the Giants front office will standardize on AMD-based desktops and notebooks over the course of the three-year agreement. The Giants also plan to install AMD Opteron-based servers in their data centers where appropriate.