TAIPEI, Taiwan - May 29, 2012 - AMD (NYSE: AMD) today announced its AMD A-Series APUs (Accelerated Processing Units) are winners of the 2012 Best Choice of Computex TAIPEI award, the second consecutive win for the product family. The award is given by the Taipei Computer Association, a driving force behind the annual event and the leading technology organization in the country. Extensive reviews are conducted by a panel of esteemed government officials, academics, research analysts, editors-in-chief of key media outlets and industry experts to select winning products based on outstanding design and cutting-edge technology in nine product categories. 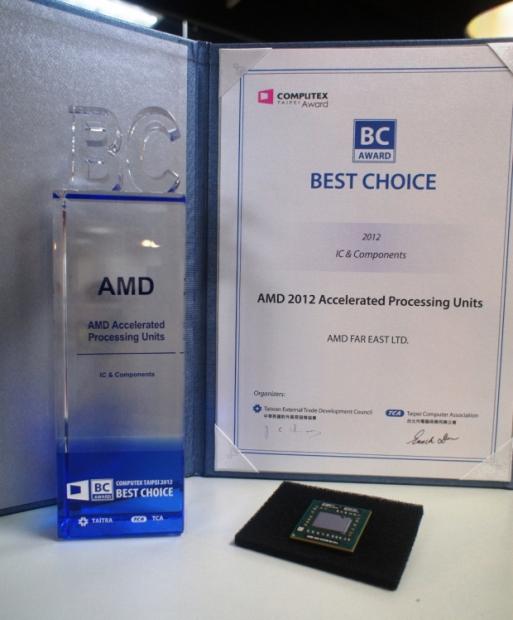 The second generation AMD A-Series APU combines the company's latest multi-core x86 CPU core architecture and award-winning AMD Radeon HD 7000 Series graphics to provide an increase in performance of up to 29 percent on productivity applications (as compared with the first generation AMD A-Series APUs), an increase of graphics performance up to 56 percent, and deliver up to 12 hours of battery life.1 Its unique features enable improvements in the areas that matter most to consumers today, including entertainment, gaming and mobility, through a growing ecosystem of APU-accelerated applications.

"We are honored to receive this prestigious award from the Taipei Computer Association for the second consecutive year," said Chris Cloran, corporate vice president, AMD Client Products. "The overwhelming market reception and industry accolades for the AMD A-Series APUs demonstrate that AMD is uniquely meeting the needs of our customers and a new generation of PC buyers."

AMD and other award recipients' products will be displayed at the Best Choice Award Pavilion by Taipei Computer Association at the upcoming 2012 Computex exhibition. In addition, AMD's product showcase will be located at Booth #L0607 in the TWTC Nangang exhibition hall.

For developers interested in learning more about APUs and heterogeneous computing, AMD will be hosting the second annual AMD Fusion Developer Summit (AFDS) from June 11-14 in Bellevue, Washington. Summit participants will be able to engage in interactive sessions and hands-on labs to deepen their knowledge of APU programmability, and gain a better understanding of how software applications can take full advantage of their parallel processing power.