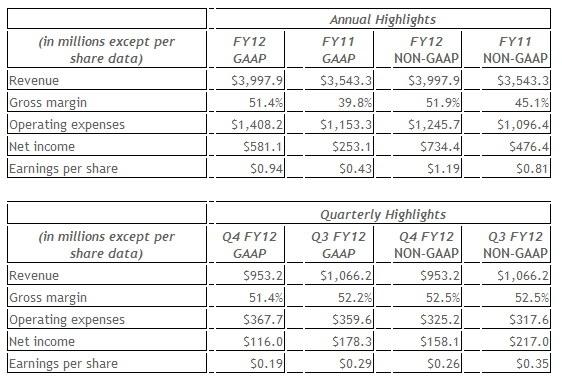 "I am pleased with our achievements last year. Our GPU business grew sharply. And, with the success of Tegra, we established our position in the mobile market," said Jen-Hsun Huang, president and chief executive officer of NVIDIA. "We expect continued growth ahead, as Tegra 3 powers a new wave of quad-core super phones and Kepler, our next-generation GPU architecture, sets new standards in visual and parallel computing."

On a non-GAAP basis - which excludes certain charges or credits, as applicable in the fiscal quarter, and the tax impact associated with such items, including: stock-based compensation, amortization of acquisition-related intangible assets, other acquisition-related costs, and legal settlements - net income was $158.1 million, or $0.26 per diluted share. That compares with non-GAAP net income of $217.0 million, or $0.35 per diluted share, in the prior quarter, and net income of $142.4 million, $0.24 per share, in the same period a year earlier.

Our outlook for the first quarter of fiscal 2013, is as follows:

- GAAP and non-GAAP tax rates are expected to be approximately 20 percent for the fiscal year 2013; and approximately 16 percent for the year, if the research tax credit is reinstated into U.S. tax law. Our annual projected tax rates reflect our expectation for the quarter, excluding any discrete tax events that may occur, which, if realized, may increase or decrease our GAAP and non-GAAP tax rates.

- NVIDIA's Tegra 3 processors started shipping to consumers in the Asus Transformer Prime tablet. The tablet is the first to run Android 4.0, "Ice Cream Sandwich." Asus also announced a $249 tablet to be based on Tegra 3.

- Other Tegra 3 devices announced in the quarter include:

- NVIDIA announced NVIDIA Maximus technology, which increases productivity by enabling design and simulation to be accelerated on a single workstation.