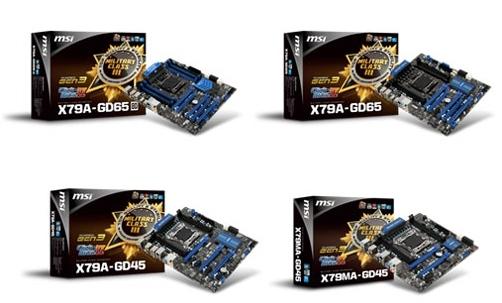 MSI's Click BIOS II is the world's 1st to provide a unified graphical user interface under both UEFI & Windows. System settings can be adjusted using the mouse or even LCD touch control under different environments. Click BIOS II can not only save overclocking settings to a USB storage device but also upload them for sharing with other overclocking enthusiasts. This convenient and intuitive design is the result of continual technological breakthrough developed by MSI for its flagship mainboard line.

MSI's proprietary OC Genie II can achieve amazing performance increases in just one second. CPU and memory performance are optimized without compromising system stability, significantly saving the time required by overclockers for fine-tuning. Once the user enables OC Genie on MSI's X79 mainboards, the clock rate on the Intel Core i7-3960X Extreme Edition processor pumped from a default of 3.3GHz to 4.0GHz. The 21% increase enables users to enjoy the performance boost from overclocking with ease.

MSI X79 series mainboards are all equipped with THX TruStudio PRO audio technology for the best sound quality. Experience the most immersive surround sound effects when you are watching Blu-ray movies, other media, or playing 3D games!

MSI's X79 mainboards support the latest Multi-BIOS II technology. The integrated dual BIOS design improves safety and convenience by allowing enthusiasts to use a switch on the mainboard to manually switch between different BIOS setups when one is corrupted by overclocking or other factors.

Super Charger Charges Your iPad / iPhone / Smart Phone, Even When Computer is Powered Off!

MSI's X79 mainboards support Super Charger fast charging technology to deliver triple the current of standard USB 2.0 interfaces. Even if your computer is switched off, you'll still be able to quickly recharge your iPad/iPhone or smart phone to ensure you always stay connected!