HELSINKI, FINLAND - NOVEMBER 14, 2011 - Futuremark, the world leader in performance benchmarking software, today announced development of a new version of 3DMark, the company's flagship benchmark for gamers. 3DMark for Windows 8 (working title) is designed for gaming performance measurement and comparison across all Windows 8 devices from tablets and notebooks to high-end desktop gaming systems. The announcement was accompanied by an atmospheric concept image for the new benchmark showing an elemental rock warrior brandishing two blazing swords. 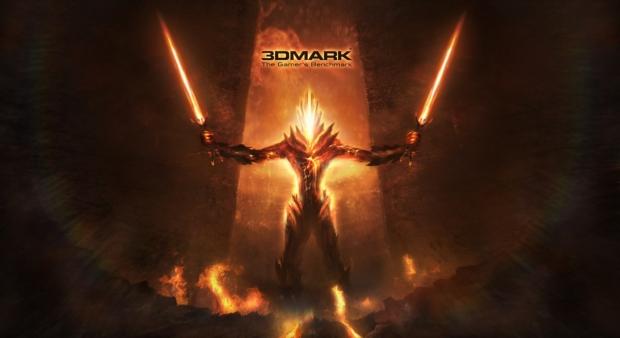 "With Windows 8 gamers will be able to enjoy their games on a wide range of devices from lightweight tablets to heavy-duty desktop rigs. Faced with so much choice it will be hard to work out which devices offer the best value for money. Fortunately 3DMark for Windows 8 will be our most wide-reaching 3DMark ever, able to accurately measure and compare gaming performance across all devices and graphical feature sets available with Windows 8."

- Measures and compares gaming performance on all Windows 8 devices

- Supports both x86 and ARM-based architectures

- Can be used in both Metro UI and 'classic' Windows environments

- Created in co-operation with the world's leading technology companies

- Currently in development, expected to be released in 2012

The development of 3DMark for Windows 8 benefits from the co-operation of many of the world's leading technology companies. The Futuremark Benchmark Development Program (BDP) includes AMD, NVIDIA, Microsoft, Imagination Technologies, Dell, HP and other well known companies. Companies wishing to participate in the BDP are invited to contact Oliver Baltuch, Futuremark President via oliver.baltuch [at] futuremark [dot] com or telephone +1-408-718-8363.