More efficient economics for the Cloud with half the power per core[iii], requiring 2/3 less floor space[iv] and up to 2/3 lower platform price[v]

"Our industry is at a new juncture; virtualization has provided a new level of reliable consolidation and businesses are now looking to the cloud for even more agility and efficiency. We designed the new AMD Opteron processor for this precise moment," said Paul Struhsaker, corporate vice president and general manager, Commercial Business, AMD. "The wait for the most anticipated new product and architecture for servers is over. Leading OEMs are now offering cloud, enterprise and HPC customers a full suite of solutions based on the industry's most comprehensive server processor portfolio, the new AMD Opteron family of processors which deliver an inspired balance of performance, scalability and efficiency."

AMD also announced the expansion of its 2012 roadmap with the addition of the new AMD Opteron 3000 Series platform. The AMD Opteron 3000 Series platform is targeted to the ultra-dense, ultra-low power 1P Web Hosting/Web Serving and Microserver markets. The first processor will be the 4-8 core CPU code-named "Zurich", expected to ship in the first half of 2012. "Zurich" is based on the "Bulldozer" architecture and leverages the new Socket AM3+. The AMD Opteron 3000 series offering is designed for hosting customers who require dedicated servers for their customers. These cloud and web hosting customers appreciate the cost savings associated with a lower cost infrastructure, yet still want to deploy a server-class product with reliability and security features and server OS certification.

IT customers of all sizes can today take advantage of new servers based on the engineering and business advantages of AMD's new "Bulldozer" architecture, which has been engineered for the leading datacenter workloads. Systems from Acer, Cray, Dell, HP, IBM and many additional channel and motherboard partners are expected on the market in the coming days and weeks.

AMD is also introducing embedded server processors designed for high-end embedded systems such as storage, telecommunications and networking infrastructure. These models are planned to be available to match the embedded market's longevity need.

An extremely comprehensive processor portfolio scaling from 4- to 16-cores

Unmatched power efficiency with power envelopes that are consistent with previous generation platforms and as low as 4.375W per coreiii

Up to 24 percent to 84 percent better performance on key cloud, virtualization and HPC workloads[ix]

Up to 4 memory channels with up to 1600 MHz memory

The only x86 processor to support ultra-low voltage 1.25v memory

Up to Four x16 HyperTransport technology (HT3) Links at up to 6.4GT/s per link

Together, these new features allow AMD to deliver unparalleled performance, scalability and efficiency for highly threaded workloads like HPC, database, virtualization, and especially, the emerging web and cloud market.

Full performance details can be found at http://www.amd.com/opteronperformance or read about the latest here. 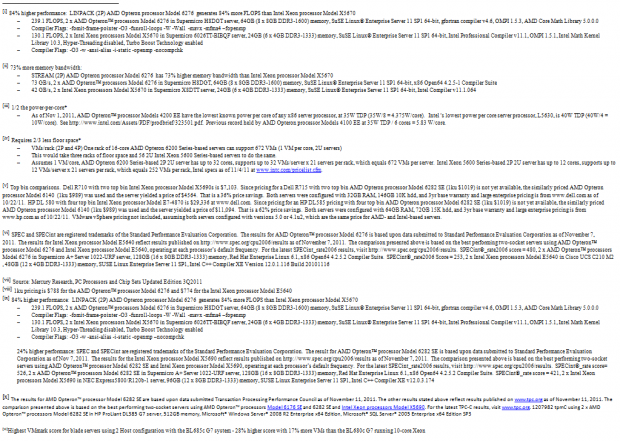