Intel Z68 Gets Weaponized, Locked, Loaded and Ready to Deploy 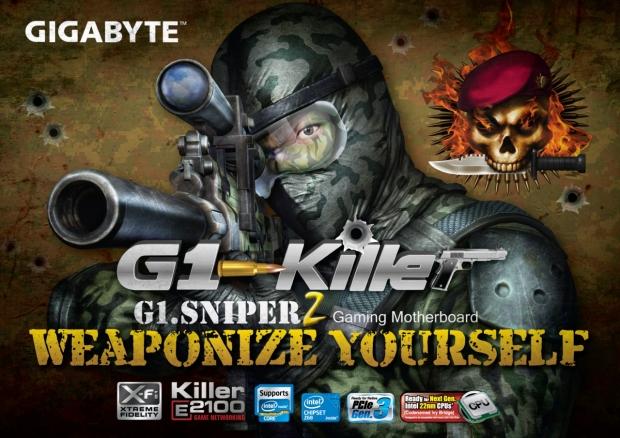 "The GIGABYTE G1.Sniper 2 brings our acclaimed no mercy G1-Killer gaming philosophy to Intel's mainstream Z68 platform", commented Henry Kao, Vice President of GIGABYTE Motherboard Business Unit. "From listening closely to the gaming community, it's clear that this is an eagerly anticipated motherboard, and one that will guarantee the fearlessly uncompromising gaming experience that so many of our customers crave."

"We're excited to continue our great working relationship with GIGABYTE to give gamers the competitive advantage of Sound Blaster audio on the G1.Sniper 2 Gaming Motherboard," said Steve Erickson, VP and GM of audio and video at Creative. "When it comes to extreme gaming, dedicated Sound Blaster X-Fi 20K2 onboard processing with EAX 5.0 technology blows away the performance of any integrated chipset with host audio on the market."

The GIGABYTE G1.Sniper 2 is one of the first motherboards to provide gamers with the latest Gen.3 PCI Express technology, delivering maximum data bandwidth for the latest discrete graphics cards.

Being able to hear where your enemy is located before you see them can put you at a distinct advantage in most gaming situations. That is why GIGABYTE has rigged the G1.Sniper 2 motherboard with the industry's most advanced audio solutions to give you the highest caliber audio experience. The GIGABYTE G1.Sniper 2 motherboard, as a member of the GIGABYTE G1-Killer series, is one of the world's only gaming motherboards to feature Creative's top-of-the-line Soundblaster Digital Audio Processor (20K2) onboard with X-Fi Xtreme Fidelity and EAX Advanced HD 5.0 technologies, allowing you to experience sound in your gaming world exactly as you would in real life.

Dedicated Network Processing Unit (NPU) with 1Gb of dedicated DDR2 memory helps offload network traffic from the CPU, freeing it up to do other important computing tasks.

Built from the ground up for unequalled speed, intelligence and control over online game data and streaming media, Killer Network Manager is the network control center for the G1.Sniper 2 motherboard. This unique and exclusive application shows the networking health and performance of the G1.Sniper 2 and provides all the tools needed to manage and optimize the network connection for online games and streaming entertainment.

Bigfoot Advanced Stream Detect is at the heart of Killer Networking Platform, intelligently prioritizing important streams, such as games, HD video, video chat and high-quality streaming audio. Now, users can enjoy silky-smooth online gaming, stutter-free streaming entertainment and crystal-clear voice chat - all at the same time. With Visual Bandwidth Control, users have the power to adjust bandwidth for ANY network stream. Download files, play online games or even watch a video all at the same time - it's all possible now with the Killer E2100 Game Networking Platform. 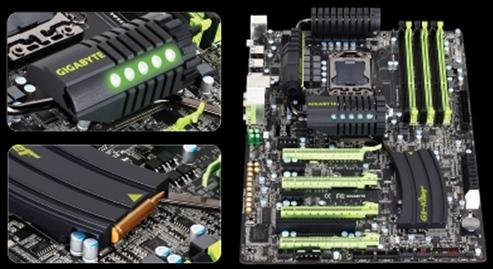 The GIGABYTE G1.Sniper 2 features the distinctive heatpipe design that identifies all GIGABYTE G1-Killer series motherboards. You'll soon find that it is as deadly to heat as it looks.

By effectively spreading the heat from the critical areas of the motherboard such as the CPU VRM zone and quickly dissipating it, all GIGABYTE G1-Killer series motherboards remain cool, even when the battle heats up. Modeled after common firearms issued to soldiers deployed to a warzone, including pistol, rifle and ammo magazine, the Locked and Loaded heatpipe design utilizes a unique fluting technology similar to a rifle barrel fluting, which allows for maximum heat dispersion.

GIGABYTE G1.Sniper 2 users can also take advantage of the exclusive GIGABYTE EZ Smart Response utility, allowing a user-friendly and automatic Intel Smart Response setup, without having to perform an operating system reinstallation and BIOS reconfiguration. This allows you to quickly and effortlessly enjoy a significant boost in system performance.

The GIGABYTE G1.Sniper 2 motherboard supports LucidLogix Virtu GPU Virtualization technology which allows users to dynamically switch between their built-in graphics and their high-end, 3D discrete graphics cards. In so doing, switchable graphics help to dramatically reduce PC graphics power consumption while boosting performance when it is needed most.

Navigating through the BIOS to change system settings can be a daunting task for users not familiar with control "F" functions and mouse-less navigation. While some BIOSes try to address this with a mouse friendly environment, many implementations still lack a certain ease-of-use necessary for most people. With Touch BIOS, GIGABYTE engineers have completely re-imagined how users can interact with their BIOS, allowing for a more intuitive user experience whether using a keyboard, mouse or touch screen monitor. In fact, with a touch screen monitor, GIGABYTE Touch BIOS is as easy to use as most apps on an iPhone.

To learn more about the GIGABYTE G1.Sniper 2 motherboard and the GIGABYTE G1-Killer series, please go to: http://www.gigabyte.com/microsite/259/index.html

GIGABYTE Technology Co. Ltd., headquartered in Taipei, Taiwan, is known as a leading brand in the IT industry with branch offices located in 24 countries around the world. Founded in 1986, GIGABYTE started as a small research and development team, quickly rising in prominence to become one of the world's top motherboard manufacturers. In addition to motherboards and graphics cards, GIGABYTE has further expanded its product portfolio to include notebook and desktop PCs, datacenter servers, networking products, mobile handsets and home entertainment devices - serving each facet of our digital life in the home and office. Everyday GIGABYTE aims to "Upgrade Your Life" with innovative technology, exceptional quality, and unmatched customer service. In 2011, GIGABYTE celebrates its 25th anniversary, and a quarter of a century committed to quality, excellence and serving our customers with the utmost enthusiasm and professionalism. We look forward to navigating the future at full sail.