Most experts recommend at least 4GB of RAM for Apple OS X Lion to truly 'Roar' - OWC's most popular 4GB and 8GB sets from $37.99 offer up to 78% savings versus factory options 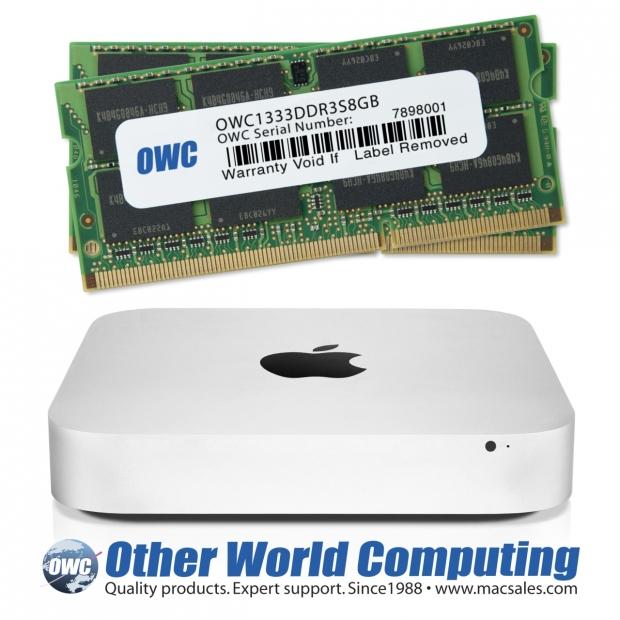 For more information on OWC Memory upgrades up to 16GB for the new Mid 2011 Mac mini, visit: http://eshop.macsales.com/shop/memory/Apple_Mac_mini/DDR3_1333 .

For information on internal drive upgrades up to 1.0TB, internal OWC Mercury SSD upgrades up to 480GB, and other accessories for all Mac minis from 2006 up to and including the new 2011 models, visit: http://eshop.macsales.com/shop/mac-mini/

While Apple's official minimum RAM requirement for OS X Lion is 2GB, industry experts agree 4GB of RAM is the minimum that should be installed for optimum performance of typical daily computer usage. For more advanced uses such as graphics production, A/V editing, and/or running a virtual machine, 8GB to 16GB of RAM is highly recommended.

"With the largest lab of Apple computers outside of Apple, we're pleased to continue our streak of being first to fully test and certify these new 12GB and 16GB options for Mac min 2011 and furthering their amazing capability," said Larry O'Connor, Founder and CEO, Other World Computing. "Having our own on-site memory test lab ensures the quality, reliability, and capability not just for standard factory supported options, but also for development and certification of 'MaxRAM' memory upgrades to support user needs that require higher maximum amounts of installed memory otherwise not factory available."

By maintaining its own lab (http://eshop.macsales.com/memory/OWC_Test_Lab) with the industry's most extensive collection of Apple Macintosh computers only second to Apple itself, OWC is uniquely positioned to develop memory upgrade kits that deliver maximum capacity, performance, and savings. OWC Memory Upgrade Kits are engineered with premium quality components and are fully tested and certified to meet, if not surpass, all Apple memory design and compatibility specifications and come backed by a Lifetime Advance Replacement Warranty.

To see all the OWC MaxRAM configurations that exceed Apple's officially supported maximums, visit: http://eshop.macsales.com/memory/maxram The full line of OWC Memory for Apple Macintosh desktop, towers, and laptops, as well as a compatibility guide for the correct upgrades for each specific Apple model, can be found online at http://eshop.macsales.com/shop/apple/memory/

About Other World Computing (OWC)

Other World Computing (OWC) has been providing quality hardware products and support to the computer industry since 1988 and features one of the largest online catalogs of computer, iPod, iPhone, and iPad enhancement products through its e-commerce portal www.macsales.com. As a member of the Apple Developer Program, OWC also provides extensive US based technical support for Macintosh users around the world as well as Internet access via www.fastermac.net and www.owc.net