AMD's A-series APUs combine - on a single chip - a Quad core CPU, interface circuitry equivalent to a Northbridge and a DX11 graphics core equivalent to a desktop level graphics card, and also incorporating a 3rd-generation UVD (universal video decoder) for the accelerated decoding of HD and Blu-ray content, including stereoscopic 3D support. This APU series together with the A75 chipset, which has native support for the latest interface standards, such as SATA 6G and USB 3.0 as well as USB 2.0 and PCI-Express Gen2, makes a powerful combination that delivers all the features required in a state-of-the-art PC. 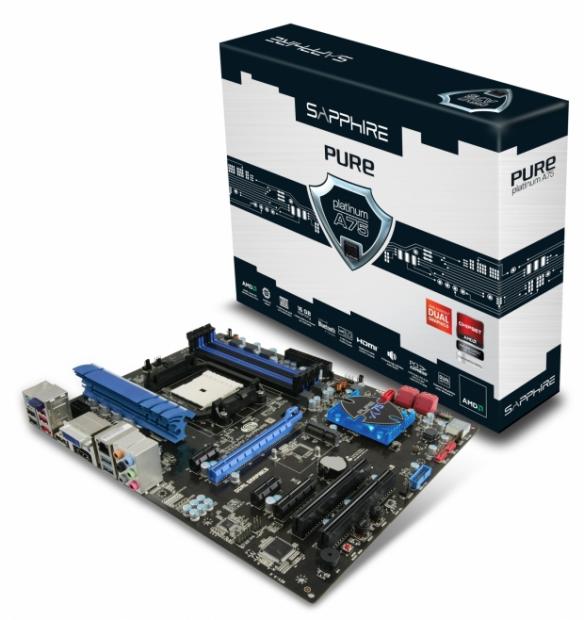 The SAPPHIRE Pure Platinum A75 is a full ATX sized board making full use of the combined features of the A75 chipset and A-series APU. Four dual channel memory sockets are provided, supporting up to 16GB of DDR3 memory with current technology, and capable of supporting up to 32GB when suitable modules become available. There are four onboard USB 3.0 ports (two at the rear) as well as four USB 2.0 ports (8 including headers), as well as Gigabit LAN and Bluetooth connectivity with EDR (enhanced data rate). It has five SATA 6G ports, including AHCI and RAID support, and a SATA 3G port brought out to the rear panel on an eSATA connector.

Three Video output options are provided for the graphics output of the APU - DVI, HDMI and DisplayPort - of which any pair can be used simultaneously. The HDMI 1.4a port supports both video and audio, including stereoscopic 3D output. The rear panel also has the standard I/O configuration for the on board HD 7.1 Audio. 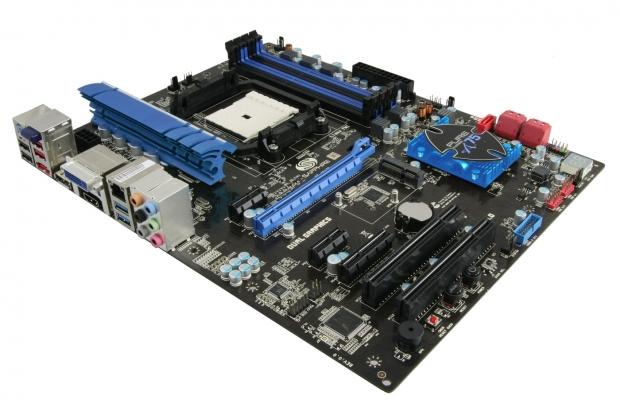 Many user friendly features have been incorporated in the SAPPHIRE Pure Platinum A75, such as digital debug display and a push button reset for the BIOS, as well as start and system reset buttons. These are especially useful for enthusiasts interested in performance tuning or overclocking. The board has a Dual BIOS, allowing for experimentation and updates, and for the hard-core enthusiast, voltage test pads have been brought out to the edge of the board for the critical voltages on the APU and memory circuits.

The build quality of the SAPPHIRE Pure Platinum A75 is high. It has a black multilayer PCB, and uses high quality gold plated connectors for USB 3.0 and LAN. It incorporates many of the high end features associated with the SAPPHIRE brand, such as the use of high reliability solid capacitors throughout. The multi-phase voltage regulation circuitry for both the APU and memory modules incorporate the patented SAPPHIRE Diamond Black chokes with coolers that have featured on SAPPHIRE's high end graphics cards.

Hardware monitoring tools and the SAPPHIRE proprietary Mainboard TriXX software allow users to review and adjust a range of system parameters while optimising performance of the APU and A75 chipset.

The SAPPHIRE Pure Platinum A75 is in production now, and will be available through SAPPHIRE's usual channel partners and retailers.