Click BIOS II, allows simple and intuitive system adjustments in both Windows and the UEFI interface! In addition, Z68A-GD80 (G3) utilizes MIL-810STD Certified Military Class II components and are equipped with OC Genie II technology which increases the performance of hard drive up to 457%. The MSI Z68A-GD80 (G3) enables next generation superior performance with PCI Express Gen 3 and OC Genie II, ultimate stability with certified Military Class II components and an extreme user-friendly Click BIOS II interface both in Windows and in the UEFI BIOS. 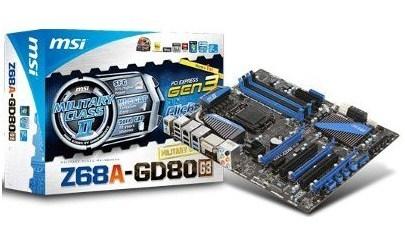 If you want to own the highest specification, components and the most superior performance and technology, the best choice is MSI Z68A-GD80 (G3). The product is expected to hit the market in the very early Q3 2011 as the first PCIe Gen 3 mainboard available in the global market.

MSI Z68A-GD80 (G3) is backwards compatible with all the devices with PCI Express 2.0 or older devices already available on the market and enhances their performance considerably. For example, PCI Express 2.0 SSD devices on MSI Z68-GD80 (G3) mainboards perform 14% faster than on competitors mainboards.

ClickBIOS IIAs an industry leader of UEFI technology, MSI revolutionizes the industry again with the world's first UEFI BIOS which utilizes a unified graphical interface in both Windows and in the UEFI BIOS, Click BIOS II. Click BIOS II brings the ease of a clear, unified interface with all the benefits of MSI's UEFI interface. This allows both die-hard overclockers or first-time system users to get the maximum out of their system through an easy-to-use Graphical User Interface. This interface supports all traditional input devices like a Keyboard, Mouse or new touch-screen interfaces for the most flexibility.

OC Genie2MSI's exclusive OC Genie II provides stunning system performance within a single push of a button and unleash the true performance of CPU, memory and integrated graphics all at once. By maximizing system performance and guaranteeing the most stable condition, it gives users the best benefits in the shortest time. When measuring with industry-standard benchmarking software such as 3DMark Vantage and PCMark Vantage, the results show that OC Genie II boosts 3D game performance up to 145% and hard drive reading speed up to 457% along with Intel Smart Response Technology.