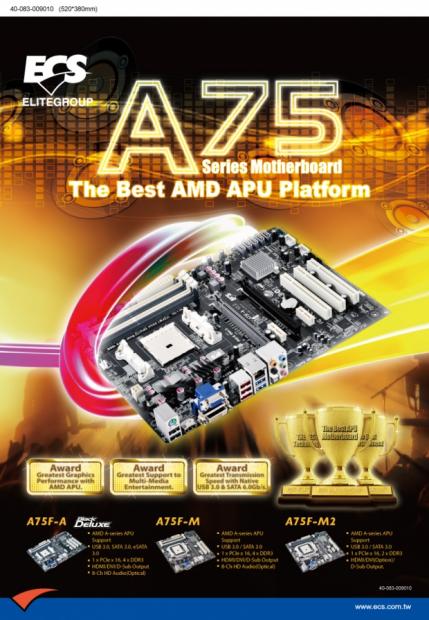 As one of the ECS Black Deluxe series, ECS A75F-A has passed 50¡æ burn test, presenting high quality and unbelievable durability. ECS Black Deluxe A75F-A also equips with complete expansion slots from PCI Express 2nd generation x16, x4 to PCI 1st generation for users to enlarge the power of yours computers with every possibility. To match the amazing graphics power of APU, ECS A75F-A has full video output options: HDMI/DVI/D-Sub with optical audio output for you to enjoy the ultimate entertainment moment.

ECS Black Deluxe A75F-A, A75F-M and A75F-M2 all support the latest AMD A series APU with AMD Hudson D3 chipset and AMD FM-1 socket. With native USB 3.0 and SATA 6.0Gb/s powered by AMD Hudson D3 chipset, ECS A75 series represents the official arrival of new age of high transportation speed, and that USB 3.0 and SATA 6.0Gb/s have also officially become the basic equipment for every computer.

Supporting the latest AMD FusionTM A series APU means that ECS A75 series has great graphics ability to support DirectX 11, UVD 3 and all provide at least two outputs of HDMI and D-Sub(VGA). ECS A75 series motherboards all supply ECS unique applications: EZ Charger/eDLU/eBLU/MIB III for users to experience the convenient using environment. Last but not least, all A75 series motherboards have anti-static (ESD) protect, ensure the durability of your computer to keep your motherboard safe from electrostatic damage.