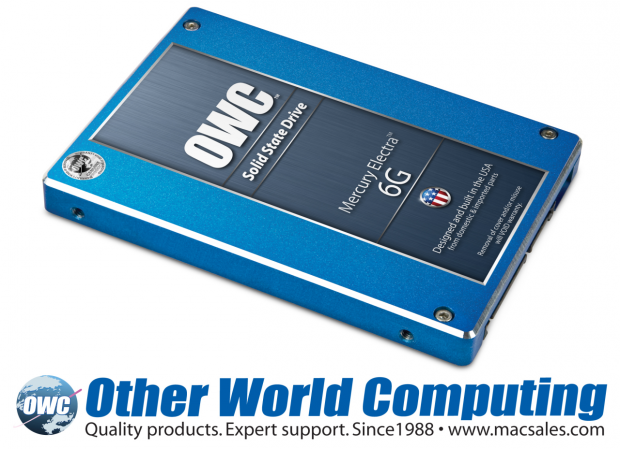 Offering the SATA Revision 3.0 performance of a 6G SSD, but aggressively priced like a SATA Revision 2.0 3G SSD, the OWC Mercury Electra 6G is ideal for high speed personal computing, home office environments, gaming, and production workstations, can be incorporated into a RAID 1 or SPAN configuration, and is available for immediate ordering in three capacity sizes:

Speed doesn't matter if it can compromise data integrity. Thanks to SandForce® DuraClass™ technology, the OWC Mercury Electra 6G is able to provide up to 100X higher data protection than provided by ordinary SSDs as well as leading enterprise class hard disk drives. By combining the highest level of Error Correction Code (ECC) and SandForce RAISE™ (Redundant Array of Independent Silicon Elements) technology along with 7% over provisioning reserve/overhead flash allocation, the OWC Mercury Electra 6G provides RAID like data protection and reliability in a single drive application.

To ensure the highest level of customer satisfaction and confidence, OWC is extending its renowned 30-Day Money Back Guarantee on its SSD line to include the new Mercury Electra 6G SSD. If a consumer is not completely satisfied with an OWC Mercury Electra 6G SSD for any reason, they simply need to contact OWC's award-winning Customer Service department - which offers 24/7 Live Chat support - to request a full, hassle-free refund.
"We're very excited to continue the evolution of our solid state drive line with this new Electra model," said Larry O'Connor, Founder and CEO, Other World Computing. "We're being very aggressive in pricing this model to appeal to consumers and prosumers who have yet to make the SSD switch. With over 500MB/s of highly reliable performance, the OWC Mercury Electra 6G helps Mac and PC owners make their machines quickly and easily 'faster in a flash'".

Expands Most Comprehensive SSD Line For Macs And PCs

The new Mercury Electra 6G SSD joins OWC's existing line of performance leading, world speed record breaking Mercury Pro SSDs for nearly every Mac and PC produced over the past decade available in capacities from 40GB to 480GB starting from $99.97:

Other World Computing (OWC) has been providing quality hardware products and support to the computer industry since 1988 and features one of the largest online catalogs of computer, iPod®, iPhone®, and iPad® enhancement products through its e-commerce portal www.macsales.com. As a member of the Apple Developer Program, OWC also provides extensive US based technical support for Macintosh users around the world as well as Internet access via www.fastermac.net and www.owc.net