Do you desire to make SLI technology running on AMD motherboard? Well, ASRock 990FX Extreme4 allows users to take advantages of both CrossFireX and SLI technologies. We always give you more than you expected! 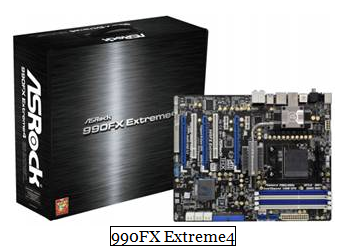 
Performance Gear - 970 Extreme4
Meanwhile, ASRock also introduces another great motherboard: 970 Extreme4. Based on 970 chipset, this board is marked by its versatile solutions. To name a few, 3 PCI Express slots cater for multi-GPU settings, manageable smart switches and Dr. Debug, offering flexible options which will appeal to DIY users. Beside its onboard equipments, this board also features superior software tools such as mouse-controllable Graphical UEFI, XFast USB that optimizes USB transfer speed performance and On/Off Play technology.

What makes this board becomes more distinctive; however, it's the SLI technology. The ASRock 970 Extreme4 is the first AMD 970 motherboard supporting Nvidia SLI technology in the world! With a wide range of prominent functions, advanced DIY users should not miss 970 Extreme4! 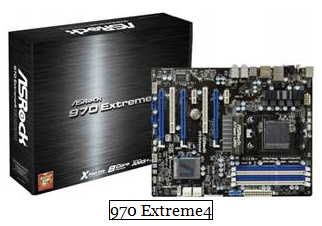 The latest ASRock AMD 9 series motherboards come with a bucketful of technologies aimed at delivering the ultimate PC experience!