Uses award-winning SandForce technologies and Tier 1/Grade A NAND to deliver up to 68% faster real-world performance and up to 3.5X faster 4K random reads/writes than factory options

May 5, 2011 Woodstock, IL -- Other World Computing (OWC) http://www.macsales.com, a leading zero emissions Mac and PC technology company, today announced its OWC Mercury Aura Pro Express Solid State Drive is now shipping in an industry largest 480GB capacity for all 2010 Apple MacBook Air models. First announced at the 2011 Consumer Electronics Show this past January, the OWC Mercury Aura Pro Express line now offers up to 4X greater capacity and up to 68% faster real-world performance than factory available options. This new 480GB model introduction continues OWC's position as the only aftermarket SSD manufacturer for the 2010 MacBook Air and the most comprehensive U.S. manufacturer of industry leading SandForce processor based SSDs available today with OWC Mercury Pro brand SSD models available for nearly every Mac and PC produced over the past decade. 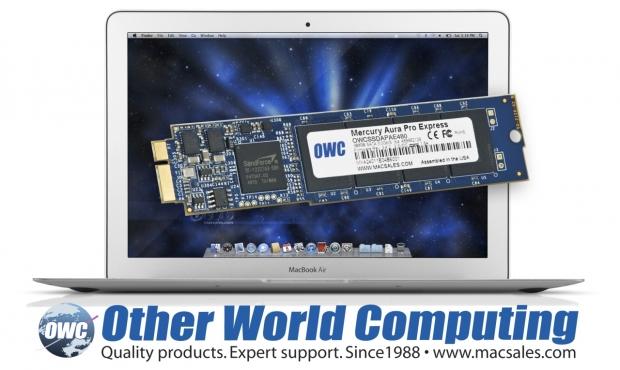 Utilizing SandForce DuraClass technology, the OWC Mercury Aura Pro Express is able to provide up to 100X higher data protection than provided by ordinary SSDs as well as leading enterprise class hard disk drives. By combining the highest level of Error Correction Code (ECC) and SandForce RAISE (Redundant Array of Independent Silicon Elements) technology along with 7% over provisioning, the Mercury Aura Pro Express provides RAID like data protection and reliability without loss of transfer speed due to parity.

Out of a field of more than 230 exhibitors and thousands of exhibited products at this past January's Macworld 2011 conference, the OWC Mercury Aura Pro Express SSD was named one of 10 Macworld Expo 2011 "Best of Show" products by Macworld magazine as well as earning "Best Mac Hardware" honors by MacLife magazine.

Expands Most Comprehensive SSD Line For Macs And PCs

First and fastest SandForce processor based IDE/ATA SSD available for pre-Intel PowerPC based Macs, PCs, and other desktop/tower computers.

For more information on the OWC catalog of over 2,900 performance upgrades and accessories, or for reseller inquires, visit: http://eshop.macsales.com/

"We're quite pleased to introduce this highest capacity model to the first and only available aftermarket SSD line for the 2010 MacBook Air," said Larry O'Connor, Founder and CEO, Other World Computing. "With up to 4X greater capacity and up to 68% faster real-world performance over factory options, the Mercury Aura Pro can truly transform a MacBook Air."

Other World Computing (OWC) has been providing quality hardware products and support to the computer industry since 1988 and features one of the largest online catalogs of computer, iPod, iPhone, and iPad enhancement products through its e-commerce portal www.macsales.com. As a member of the Apple Developer Program, OWC also provides extensive US based technical support for Macintosh users around the world as well as Internet access via www.fastermac.net and www.owc.net