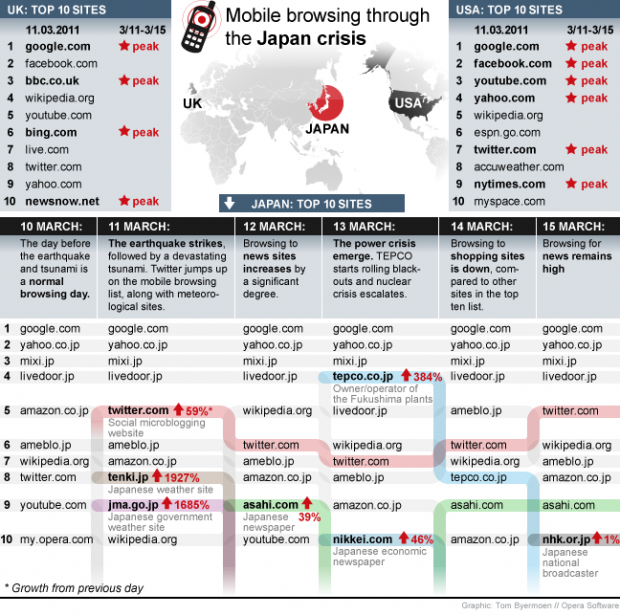 In the middle of March, Japan was struck by one of the largest earthquakes in modern history and a devastating tsunami. Millions of lives were affected by the event, some directly by the force of nature, others by the need to obtain more information about their surroundings.

"It could be argued that the need for information is only surpassed by the need for food, security and shelter, especially in the times of crisis," said Jon von Tetzchner, Co-founder, Opera Software. "Our logs showed a sharp increase in Opera Mini usage as information seekers in Japan sought out both news sources and certain corporate sites in the days following the earthquake."

According to The State of the Mobile Web report, increase in visits to news-related sites shot up overnight, as one might expect, but other site increases are more interesting. On March 11, there was a massive surge for Twitter and Japanese meteorological sites while people tried to access the most current information on the situation. Two days after the earthquake, the website of TEPCO, the owner and operator of the Fukushima power plants, rose from obscurity into the top ten list of sites visited in March in times of the nuclear crisis and rolling blackouts in Tokyo.

To read the full report and our analysis on the change of web browsing patterns in a national crisis, go to http://www.opera.com/smw/2011/03/.

Some highlights from the report

- In the month of March, there was a lot of movement in the top 20 countries ranking (in terms of total Opera Mini users). Nigeria jumped to the #5 spot, Mexico shot up to #11, Egypt got to #16 and Bangladesh rose to #19.

Opera Software ASA has redefined web browsing for PCs, mobile phones and other networked devices. Opera's cross-platform web-browser technology is renowned for its performance, standards compliance and small size, while giving users a faster, safer and more dynamic online experience. Opera Software is headquartered in Oslo, Norway, with offices around the world. The company is listed on the Oslo Stock Exchange under the ticker symbol OPERA. Learn more about Opera at http://www.opera.com/.