LAS VEGAS, NV -- (Marketwire) -- 04/11/2011 -- NAB 2011 -- A broad wave of innovations in broadcast, film and digital content creation being showcased this week during NAB 2011 are powered by the latest NVIDIA® Quadro® professional GPUs. 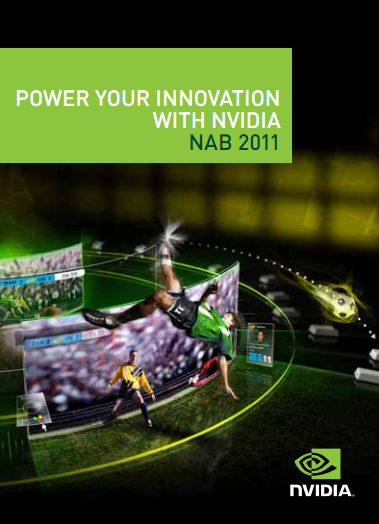 NVIDIA Quadro professional graphics solutions, based on the NVIDIA Fermi architecture, are being trumpeted by industry leaders including Adobe, ARRI, ASSIMILATE, Autodesk, Avid, Chyron, Pixel Power, Quantel, and Vizrt, among many others.

"Some of the biggest names in the production and broadcast business, including CNN and DIRECTV, are using tools that embrace the power of the GPU," said Greg Estes, industry executive, Media & Entertainment, NVIDIA. "Proof is all around us here in Las Vegas that NVIDIA is a key force behind much of the latest software and hardware solutions that are now being used in the marketplace."

Examples of some of the innovations on display include:

At NVIDIA's booth at NAB 2011, The ARRI Group/ARRI Inc. (Booth #C 4337) is demonstrating a technical preview of their CUDA-enabled ARRIRAW software development kit (SDK), providing application developers with the ability to implement real-time processing of ARRIRAW's digital negative using NVIDIA GPUs. With the GPU-enabled ARRIRAW SDK, it will be possible to maintain and work with the digital negative in real-time through the entire post production workflow, without the need for specialized hardware. IRIDAS (Booth #SL 7927) is demonstrating SpeedGrade at NVIDIA's booth, and how RAW workflow enables full resolution, pre-visualization of color decisions on set while maintaining the digital negative.

ASSIMILATE's new SCRATCH digital finishing and SCRATCH Lab digital lab tools support the NVIDIA Quadro 6000 and Quadro 4000 for Mac. Both SCRATCH and SCRATCH Lab utilize the computational power of NVIDIA CUDA architecture to maximize the creativity and productivity of dailies and post-production artists in film and broadcast. SCRATCH supports native workflows from RED, ARRIRAW, DPX and MXF, to Phantom, P2MXF, DVCHD, film, DSLR and many others.

Autodesk, Inc. (Booth #SL 2120) is harnessing the power of NVIDIA Quadro professional graphics in both Autodesk Flame Premium 2012 and Autodesk Smoke 2012 for Mac OS X software. Powered by the NVIDIA Quadro 4000 for Mac, Smoke for Mac, which is being demonstrated in the NVIDIA booth, offers advanced finishing integrated with an editorial timeline on the Apple Macintosh platform.

Avid (Booth #SU 902) is demonstrating Media Composer software, which utilizes Quadro professional graphics to accelerate visual effects and graphics tasks, and boost productivity for editors working on all types of content. Available with a range of Quadro-powered configurations, Media Composer provides fast, interactive and collaborative editing capabilities in an open and extensible platform.

Chyron Corporation (Booth #SL 1520) is demonstrating its premiere HyperX 3.1 and LEX 3.1 on-air graphics systems, which are now driven with the latest Quadro professional graphics based on the NVIDIA Fermi architecture.

Perceptive Pixel (NVIDIA Booth, #SL 2728) is demonstrating its new Storyboard live presentation application featuring new TouchCast technology on LCD multi-touch systems. With Storyboard, a TV station can assemble on-air stories from an array of rich media content types and templates. 3D motion graphics and up to 12 live HD video feeds, as well as live, interactive applications such as WSI MaxStorm and Google Earth can be combined on Storyboard. This enables talent to rapidly produce and deliver late-breaking stories. TouchCast technology seamlessly hosts other multi-touch interactive applications, including those running on external servers, and integrates them into a powerful, flexible, unified environment which leverages multiple NVIDIA Quadro 6000 GPUs and Quadro SDI capture cards to provide the best possible graphical touch experience.

Quantel (Booth #SL 2014) is launching Qube, an editor for Enterprise sQ systems. Qube delivers improved performance at lower cost than its predecessor sQ Edit Plus. It is the first product in Quantel's broadcast range to take advantage of CUDA GPU accelerated processing. Qube is a turnkey system that includes an NVIDIA Quadro 4000 GPU, and will be used in news, sports, home shopping and Stereo3D applications by broadcasters worldwide.

NVIDIA is demonstrating the latest Quadro-based solutions being incorporated by Adobe, ARRI (w/IRIDAS), Autodesk, Avid, Perceptive Pixel, and Vizrt at NAB 2011 in the NVIDIA booth, #SL 2728, located in the lower South Hall at the Las Vegas Convention Center, from April 11 to 14, 2011.