SANTA CLARA, CA -- (Marketwire) -- 03/24/2011 -- NVIDIA today introduced the GeForce® GTX® 590, the fastest dual graphics card available today which also happens to be the world's quietest too. Powered by dual NVIDIA Fermi™-class GPUs on a single card, the GTX 590 is designed for über enthusiasts and those looking to build the ultimate PC gaming rig.

With a combined 1024 NVIDIA CUDA® architecture cores, 3GB of GDDR5 memory, 6 billion transistors and over 2200 individual components all packed into an 11 inch dual slot card, the GTX 590 delivers a staggering 32 tessellation engines that can power today's cutting edge DX11 games at resolutions of 2560x1600 and higher. With four separate video outputs on each card, consumers can configure their PC with four independent displays, or they can span their gaming across 3 3D displays, at a resolution up to 5760x1080 for an intense, immersive, stereoscopic gaming experience utilizing NVIDIA 3D Vision™ Surround technology. 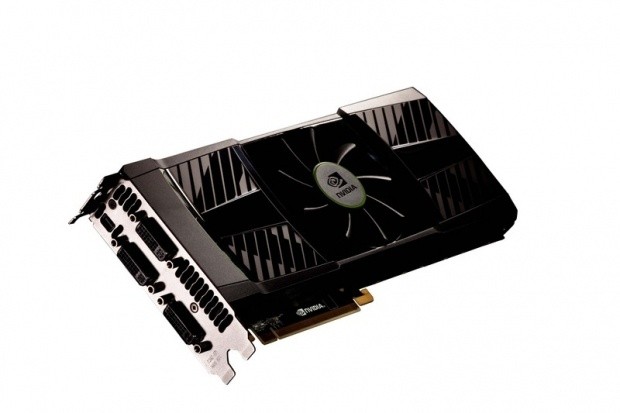 Like all NVIDIA "DX11 Done Right" GPUs, the GTX 590 delivers the world's fastest performance for DX11 games(i). And with NVIDIA SLI® technology, the industry's most scalable multi-GPU platform, gamers can increase their PC's gaming performance by adding a second GeForce GTX 590, for an incredible Quad SLI gaming mode.

NVIDIA engineered the GTX 590 to be the world's quietest dual GPU product. It features a special cooling system and dual vapor chambers which deliver both astounding performance and acoustics. Measured with a standard decibel meter, the GTX 590 clocks in at 48dB, more than two times quieter than the closest competitive product under full graphics load. To the human ear, this difference means the GTX 590 delivers a 3D gaming experience that is typical of a quiet library. In comparison, the competition's product is more on par with a busy freeway.

"The GTX 590 is the best dual GPU product ever built," said Drew Henry, general manager of GeForce GPU business at NVIDIA. "With leading performance, support for multi-monitor 3D gaming, Quad SLI, and an acoustic envelope that begs to be heard for how quiet it is, the GTX 590 epitomizes what a perfect dual graphics card looks, performs, and sounds like."

For an interactive demo of the new GeForce GTX 590, please visit: http://www.geforce.com/Hardware/GPUs/geforce-gtx-590/productdemo

What System Builders Are Saying About GeForce GTX 590:

CyberPower -- US
"The tremendous graphics performance and improved acoustics combined with the wealth of NVIDIA technologies make the GeForce GTX 590 the card to get for gamers and enthusiasts. The latest flagship GTX 590 will be incorporated into CyberPower's many award winning systems including the Fang EVO series, Black Pearl, and Gamer 3D series of gaming PCs."
-- Eric Cheung, CEO

Digital Storm -- US
"The GeForce GTX 590 is the most impressive DirectX 11 graphics card NVIDIA has ever released. Amazingly quiet and incredibly powerful, it absolutely blew us away when we hooked it up to our 5760x1080 3D Vision Surround system."
-- Rajeev Kuruppu, Director of Product Development

Falcon Northwest -- US
"The fact that the GTX 590 is the fastest card ever made doesn't surprise me. We've come to expect that with each new release from NVIDIA. What floors me is the low noise level this card produces. At full speed it's more than 10 decibels quieter than competing dual-GPU cards, which means it's literally half as loud. The fastest card at half the noise -- impressive!"
-- Kelt Reeves, President and CEO

iBUYPOWER -- US
"The GeForce GTX 590 is a surprisingly quiet for a card of its power. The combination performance and feature set make this video card hands down the best overall video card for gaming that we've ever seen."
-- Darren Su, Vice President

Inet -- Sweden
"Our first impression of the card is how quiet and cool it is, but yet so extremely powerful. We couldn't wait to try it in our monster PC, the Inet Taurus Überkill. The test results are brilliant and we can't wait to get yet another card so we can run it in SLI. The GTX 590 is a quiet beast with no competition on the market!"
-- Erik Wickman, Purchasing Manager

Maingear -- US
"The NVIDIA GeForce GTX 590 graphics solution in our desktops offers THE ultimate gaming experience. The GTX 590 has it all: NVIDIA 3D Surround, dual GPUs, and dual custom vapor chambers to keep the card cool and quiet. Pair it up with the MAINGEAR SHIFT of F131 and you have a complete package to run any game at any setting no questions asked!"
-- Wallace Santos, CEO and Founder

Origin PC -- US
"ORIGIN is dedicated to providing the best NVIDIA GPUs to our customers and the GeForce GTX 590 certainly fits the bill. It is the fastest graphics card we have ever tested and stays amazingly quiet, even under full game load! For gamers, the timing of the GTX 590 is perfect. They can get our ORIGIN GENESIS, the GTX 590, Crysis 2, and a HD monitor and know they will be ready to have the best PC gaming experience possible."
-- Kevin Wasielewski, CEO and Co-Founder

Paradigit -- Holland
"The GTX 590 is the single fastest card we've ever seen -- on top of that, its low noise, power consumption and cool operation easily make it the must-have card of 2011! Order yours now to be ready for the next generation of games."
-- Jasper Driuf, Purchasing Manager

Scan -- UK
"The GeForce GTX 590 is the ultimate high end graphics card that Scan Computers love! Ultimate performance, whisper quiet acoustics, menacing looks; it clearly has it all, and when coupled with an EK water block and Scan knowhow, the 3XS Scorpion-X PC is unleashed!"
-- Elan Raja III, Director

V3 Gaming -- US
"The new NVIDIA GeForce GTX 590 is a very well-designed product, evidenced by the superior performance and decreased noise and heat outputs when compared to the competition."
-- Thomas Gribble, Product Manager

Velocity Micro -- US
"With the release of the GTX 590, NVIDIA has once again broken new ground in the ultra performance GPU space. Our initial testing has shown that a quieter, faster card than the GTX 590 simply doesn't exist, which is sure to make it popular with our power-hungry customers. In short, the GTX 590 is remarkably quiet for such a powerful card."
-- Randy Copeland, President and CEO

Verkkokauppa -- Finland
"NVIDIA GTX 590 is the most impressive piece of hardware I have seen in long time. Thanks to great cooling system design it has amazingly low noise level for the superior performance GTX 590 provides. This card will give the ultimate experience for every gaming enthusiast!"
-- Johannes Pajunen, Product Manager