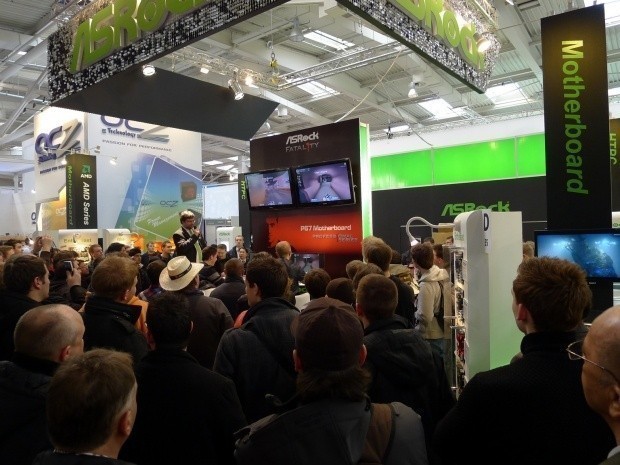 ASRock demonstrated the full line of its up-to-date motherboard products from enthusiast, performance, mainstream and value. The unique product features and comprehensive offerings impressed visitors from the globe and ASRock booth was throng with interested buyers worldwide.

In response to previous Intel product recall, ASRock promptly released the new P67/H67 motherboard series based on Intel B3 stepping chipset at CeBIT.

The 12x world's champion gaming athlete Johnathan Fatal1ty Wendel presented at ASRock CeBIT Booth to illustrate the absolute performance of Fatal1ty P67 Professional motherboard which is designed for enthusiastic gamers. The red and black colored board suggested its function is impressed as well as its professional look. The Fatal1ty Mouse Port is one of the unique features which provide the customizable USB mouse polling rate for F-Stream PC gamers; with a wide range from 125 Hz to 1000 Hz to make adjustment, gamers can obtain more precise control of their mouse.

To demonstrate the outstanding performance of Fatal1ty P67 Professional motherboard, Johnathan also played the Quake Live with fans in ASRock booth at CeBIT. The exciting on-site gaming attracted thousands of visitors come to watch the show and the motherboard performance impressed all the onlookers.

More exciting events are upcoming in ASRock booth at CeBIT. Come visit us at Hall 17, Stand D35. We look forward to seeing you here!

ASRock is now headquartered in Taipei, Taiwan, with branches based in Europe and the USA. The young and vibrant company targets at entry to mainstream segment MB business, owning reputation around the world market with its reliability and proficiency. Further information, please visit http://www.asrock.com/.