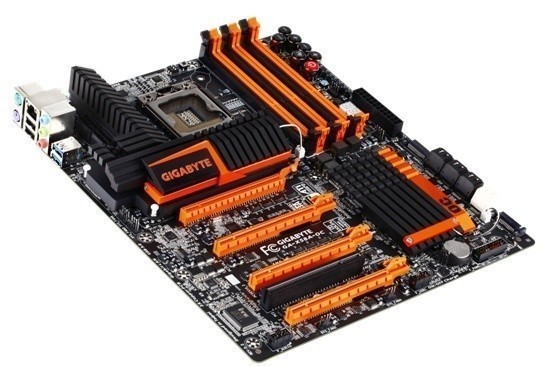 "The GIGABYTE X58A-OC introduces some really exciting and unique overclocking technologies like the PWM frequency switcher, a full range of onboard hardware OC buttons, onboard SATA power connectors for stable multiple graphics configurations, and DualBIOS switcher that up until now have just been ideas discussed in private OC forums and messages," commented HiCookie, GIGABYTE In-house Overclocking Expert. "Tweaking features aside, we have also adopted high current components such as POScaps and MPFC (Max Power Ferrite Core) Chokes that allow overclockers to bench more reliably and with more power so they are able to smash more world records. As an avid overclocker myself, having the freedom to help design a board specifically for overclockers has been a dream come true, and I really hope that overclockers enjoy benching on this board as much as we enjoyed making it!"

Based on the Intel X58 chipset (Tylersburg) and supporting LGA 1366 socket CPUs such as Intel's new top of the range Core i7 990X Extreme Edition CPU, the GIGABYTE X58A-OC takes advantage of all the performance benefits that the X58 platform has to offer including triple channel DDR3 memory support, 6 core 12 thread CPU support, and enough PCIe Gen 2.0 bandwidth to support 4-way CrossFireX and 3-way SLI for the best graphics performance in the world. 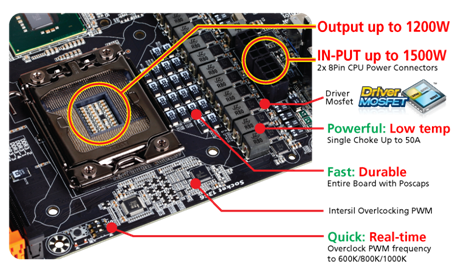 Designed for Extreme Overclocking
GIGABYTE has listened closely to the overclocking community to make sure the X58A-OC has all of the overclocking features enthusiasts have been asking for, without some of the features that are unnecessary while overclocking, or can negatively impact performance - similar to a stripped down sports car where the aircon, radio, passenger seats, etc...have been removed to reduce weight. Layout was a critical aspect of the design, not only in choice of components used, but also spacing of the components so that insulation of the board is as easy as possible, while still maintaining the most efficient data pathways between the various components. GIGABYTE is also introducing 5 new main overclocking features on the X58A-OC that help to push the performance envelope of the X58A-OC even further including OC-VRM, OC-Touch, OC-PEG, OC-Cool and OC-DualBIOS.

OC-VRM
The GIGABYTE X58A-OC features a new VRM design called OC-VRM, which includes a combination of highly conductive POScaps, 50A rated MPFC (Max Power Ferrite Core) Chokes, and Driver-MOSFETs, which combined, are able to deliver higher current to the CPU, with better efficiency and lower temperature. OC-VRM also allows users to overclock the PWM frequency via an onboard switch, for real-time adjustment. When the CPU needs maximum power, users can raise the PWM frequency in order to deliver more current through this unique POScap and MPFC Choke design. In addition, GIGABYTE has specially chosen unobtrusive components and carefully designed their layout to make it easier and quicker than ever for extreme overclockers to insulate their boards.

OC-Touch
OC-Touch enables overclockers to quickly and easily get the best performance from their system. With onboard OC-Touch buttons, users are able to manually raise and lower the CPU ratio, change BCLK settings, and even change BCLK stepping to either 1MHz or 0.3MHz. These changes can be made at any time whether in the BIOS, DOS, or Windows and in real-time without the need for rebooting, so that users can quickly fine-tune to find their CPU's maximum frequency. The onboard 4G Ready button allows novice overclockers to automatically reach 4GHz, while advanced users can use it to get to 4GHz before continuing with OC-Touch to quickly find their CPU's best margin. Onboard voltage measurement modules are also included to help users to conveniently monitor component voltages.

OC-PEG
OC-PEG provides two onboard SATA power connectors for more stable PCIe power when using 3-way and 4-way graphics configurations. Each connector can get power from a different phase of the power supply, helping to provide a better, more stable graphics overclock. The independent power inputs for the PCIe slots helps to improve even single graphics card overclocking. For 4-way CrossFireX, users must install OC-PEG to avoid over current in the 24pin ATX connector. The entire board also features POScaps, helping to simplify the insulation process so overclockers can quickly reach subzero readiness.

OC-DualBIOS
OC-DualBIOS features an onboard BIOS switcher and LED indicator, allowing users to select one BIOS for normal use, and another one for overclocking. It can also act as a backup BIOS in case of BIOS failure during overclocking. With two BIOSes, users are able to save up to 16 different overclocking profiles - a very useful feature when overclockers want to update to a new BIOS, but don't want to lose their original settings.

By being able to switch between 2 different BIOSes, OC-DualBIOS also allows users to test drive a new BIOS without having to update both BIOSes with the same update, helping to save time and unnecessary BIOS reflashes.