As the blue-ray generation is upon us, customer demand for video cards no longer only focuses on mapping speed, they also focus more and more on resolution. NVIDIA and AMD have long released video cards with over 1GB memory for their best top end public version video cards, but there are fewer for middle/high-end models; Lantic released their own version of GT460 2GB GDDR5 for players. Besides pursuing super performance mapping efficiency, it can also satisfy the rigorous demand for high resolution. 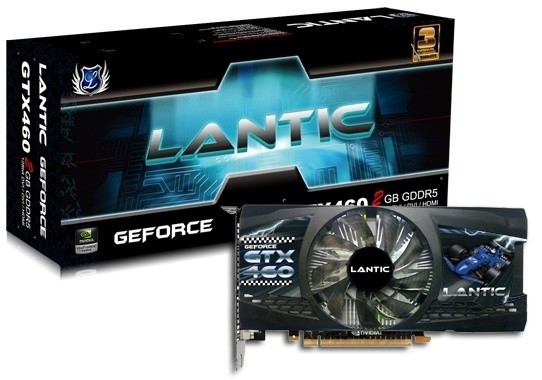 The Lantic GTX460 video card uses the NVIDIA 40nm process GF104 core, equipped with 336 stream processors and 56 texture units, supports the DirectX 11 effects specification, full HD hardware decoding technology, equipped with 8 GDDR5 memory chips, all combined into an ultra-large memory capacity/bandwidth of 2GB/256bit. The 2GB large memory capacity feature allows you to open multiple windows without affecting the gaming environment, even when the video card is smoothly running a game under 2560*1600 resolution on a 30 inch monitor. This card's core frequency is 675MHz, stream processor frequency is 1400MHz, and memory frequency is as high as 3600MHz; as for the output, Lantic GTX460's interface is equipped with the all-round combination of HDMI/DVI/DVI, supports dual monitor output, satisfies the displaying need of various types of users.

The Lantic GTX460 2GB GDDR5 uses 8cm large-sized fan blades to generate a large amount of steady air flow, vastly increases the cooling effects. Equipped with the PWM temperature control chip, the radiator can automatically adjust the fan's rotation speed according to the surrounding temperature, for the double-effect of both quieting and cooling. Lantic again displays their unique professionalism towards video cards, and does not slack off in any aspect of the product, to provide consumers with a more perfect choice.