Cash flows from operations for the first quarter of fiscal 2011 were $732 million. During the quarter, the company invested approximately $570 million in capital expenditures and spent $635 million to retire debt. The company ended the fiscal quarter with cash and investments of $2.4 billion.

Micron Technology, Inc., is one of the world's leading providers of advanced semiconductor solutions. Through its worldwide operations, Micron manufactures and markets a full range of DRAM, NAND Flash and NOR Flash memory, as well as other innovative memory technologies, packaging solutions and semiconductor systems for use in leading-edge computing, consumer, networking, embedded and mobile products. Micron's common stock is traded on the NASDAQ under the MU symbol. To learn more about Micron Technology, Inc., visit www.micron.com 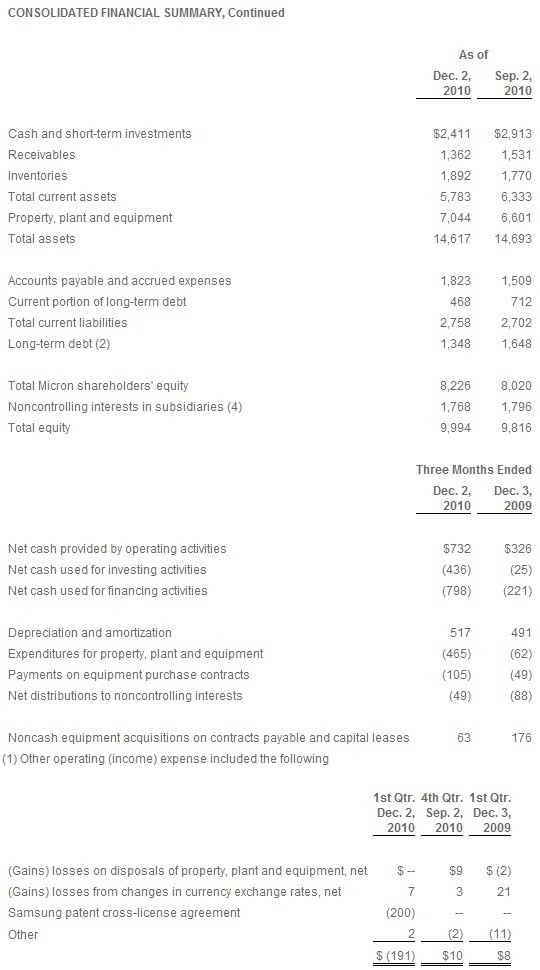 In the first quarter of fiscal 2011, the company entered into a 10-year patent cross-license agreement with Samsung Electronics Co. Ltd. ("Samsung"). Under the agreement, Samsung agreed to pay the company $275 million, with $200 million paid on October 8, 2010, $40 million due January 31, 2011, and $35 million due March 31, 2011. The license is a life-of-patents license for existing patents and applications, and a 10-year term license for all other patents.

The New 1.875% Notes are convertible under certain circumstances, at the holder's option, at an initial conversion rate of 91.7431 common shares per $1,000 principal amount. Upon conversion, holders will receive cash up to the principal amount, and any excess value will be delivered, at the company's election, in cash, common stock or a combination of cash and common stock. Holders of the New 1.875% Notes have an option to require the company to purchase the notes on June 1, 2017, and in certain other circumstances, at a price equal to 100 percent of the principal amount of notes plus accrued and unpaid interest.

In connection with the repurchase transactions, the aggregate carrying amount of debt (including unamortized discount and issuance costs) of $232 million was redeemed for $328 million in cash (including fees). As a result of this loss on the repurchase transactions and the effect of the exchange, the company recognized a non-operating loss of $111 million in the first quarter of fiscal 2011. Including the effects of the repurchase and exchange transactions and other scheduled repayments, the company reduced its debt by a net amount of $544 million during the first quarter of fiscal 2011.

Other non-operating income in the first quarter of fiscal 2010 included a gain of $56 million recognized in connection with an issuance of common shares in a public offering by Inotera Memories, Inc. ("Inotera") - an investment accounted for by the company under the equity method. As a result of the issuance, the company's interest in Inotera decreased from 35.5% to 29.8%.