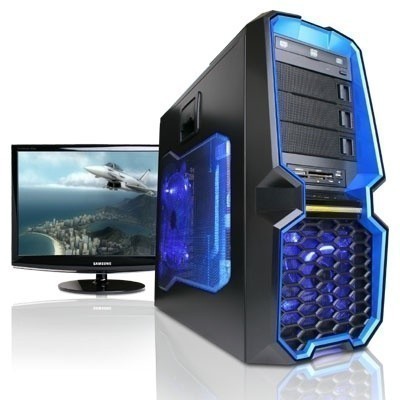 AMD has delivered a formidable volley in the high-performance graphics cards wars with its Radeon 6900 GPU series, which double the performance and deliver flawless graphics for the gaming enthusiast. CyberPower will offer the new Radeon HD 6970 and HD 6950 graphics cards across its entire lineup of desktop gaming PCs, from the Gamer Dragon and Ultra all the way to its extreme Fang EVO Series. Starting price for a CyberPower Radeon HD 6900 system is $849.00 (US).

CyberPower's Radeon 6900-based systems feature new advanced architecture which doubles that of previous generations with full support for Microsoft DirectX 11 and scalable geometry processing. Support is also included for AMD's Eyefinity multi-display technology, which can support up to six displays using a single enabled AMD Radeon graphics card. Another outstanding feature is AMD's EyeSpeed visual acceleration, which adds a shot of adrenaline to your applications for unprecedented video quality for gaming, movies and video streaming.

CyberPower customers can configure their gaming system with a single 6950 or 6970 card and add additional cards depending on the model. Customers are assured their gaming rigs will feature AMD Radeon 6900-ready compatible hardware such as motherboards from their favorite manufacturers including Asus, Gigabyte and MSI, as well as power supplies and cooling options to accommodate additional GPUs.

All CyberPower systems based on the Radeon 6900 series can be easily customized with a number of hard drive and/or SSD, optical drive, memory, and other peripheral component options at the company website. All systems will be able to drive the industry's largest and highest resolution flat-panel displays up to 2560x1600 and with support for High-bandwidth Digital Content Protection (HDCP), HDMI, 3D Blu-ray, and 7.1 digital surround sound.

CyberPower Inc. www.cyberpowerpc.com was founded in 1998 and has emerged as one of the leading custom computer system manufacturers. Headquartered in Baldwin Park in Southern California, CyberPower manufacturers and distributes a complete line of custom built Gaming Desktops, Gaming notebooks and high performance workstations to meet the unique needs of gamers, businesses, government agencies, educational institutions and other end-users. For more information contact: Sales (800) 707-0393; Email cyberpower@cyberpowerpc.com