The stylish and specially lighted Daft Punk Edition TRON headphones by Monster, a leader in manufacturing and design of high-performance headphones and A/V accessories, are designed as the ultimate headphones for gaming, music and home cinema and will be released beginning today at major electronics retailers with a special surround-sound mix of the TRON: LEGACY original motion picture soundtrack. Known for its signature KUBRICK and BE@RBRICK figures, specialty toy maker Medicom Toy will release in late December the Series 21 BE@RBRICK assortment, followed by the 400% BE@RBRICK two-pack and KUBRICK two-pack in mid-January, both designed to match the TRON: LEGACY suits which appear in the film during a musical cameo featuring Daft Punk. 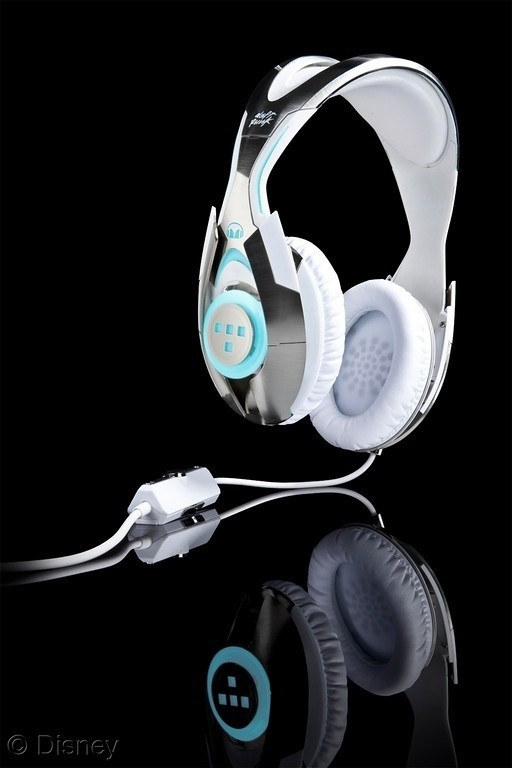 "To complement the futuristic TRON: LEGACY soundtrack created by Daft Punk required cutting-edge products that utilize the most innovative technology and high-end design," said Chris Heatherly, vice president of toys and electronics, Disney Consumer Products. "We sought out true industry leaders to bring to life Daft Punk-inspired merchandise that will take the TRON: LEGACY experience to a whole new level for fans."

Head Monster Noel Lee noted, "Monster is proud to have played our part in creating headphones that live up to the breakthrough musical experience offered by Daft Punk in TRON: LEGACY. These special-edition headphones not only reflect the design sensibilities of Daft Punk, they enhance both gaming and home cinema, with a 'higher definition' experience, and all the power and potential of the ultimate electronic music listening experience and the first headphones ever designed to be optimized for both stereo and fully immersive headphone surround-sound experience."

To create the futuristic headphones, Monster leveraged both its existing leading-edge sonic technologies and incorporated a variety of new innovations and technologies including:

The Daft Punk Edition TRON: LEGACY headphones complement the extended electronics line by Monster which is designed to appeal to discerning gamers and audiophiles and features dark finishes, neon lighting and the cyber aesthetic of the film. The Monster TRON: LEGACY T1 over-ear headphones feature Advanced Noise Suppression Technology and ControlTalk™, for easy and clear hands-free calling (SRP $349.95). The TRON: LEGACY audio dock is inspired by the iconic data disk from TRON: LEGACY ($249.95) and delivers a world-class listening experience. TRON: LEGACY fans that have downloaded Disney Mobile's free TRON app (www.itunes.com/app/tron) will be able to use the TRON: LEGACY audio dock to unlock a special TRON-themed alarm clock feature.