Sharkoon redesigns their QuickPort hard drive docking station: The "SATA QuickPort XT" model of the new series is available for the first time in white and features a new design plus an additional Backup function. 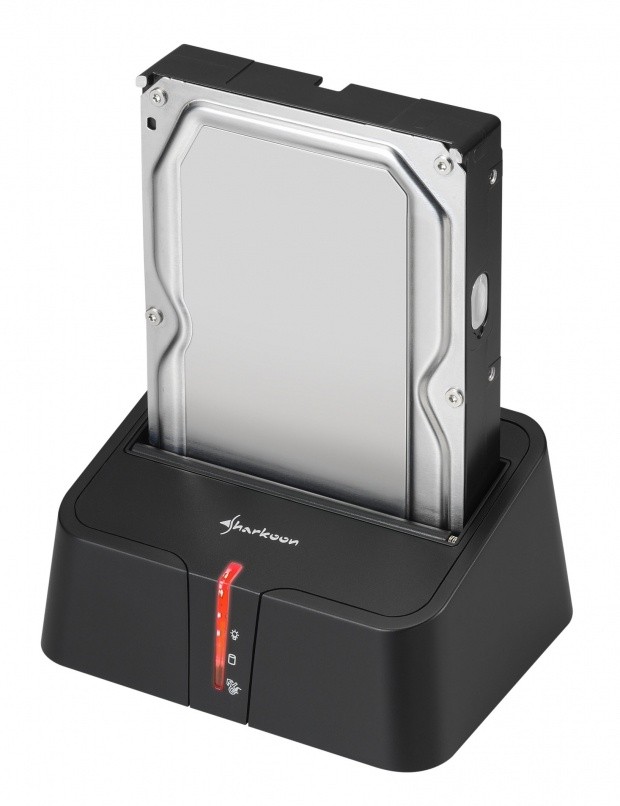 The application stays the same: With the sturdy table adapter, external SATA hard drives and SSDs can be connected directly to the computer without any prior time-consuming installation. When the disk is inserted into the slot, the system immediately recognizes it as an authorized drive.

For the new series Sharkoon has revised the design: With the housing having a new flattened forward design, the XT model looks slimmer. The measurements: 130 x 100 x 63 mm (W x L x H). Besides the new look, Sharkoon has integrated a One Click Backup Feature for Windows systems (XP, Vista, 7) and provides a CD containing the software for fast and convenient data protection. On the front of the device an LED strip shines during operation and hard drive access, on the back is a 12V power supply and an on/off switch.

The Sharkoon SATA QuickPort XTs are initially available in five different variations: Users have the choice between models with a USB2.0/eSATA interface or with a USB3.0 interface. Both are currently available in black with a red LED strip, and in white with a blue LED strip. For users who have not yet upgraded their computers to SuperSpeed USB, Sharkoon offers a USB3.0 starter kit which contains the USB3.0 QuickPort in black as well as the Sharkoon USB3.0 Host Controller Card. The PCIe card expands the computer with two USB3.0 ports. Within shipping of all models you will find a software/manual CD, brief instructions, power supply, and depending on the model either a USB2.0 or a USB3.0 cable (100 cm).