As mobile devices get smaller and lighter, yet even more feature packed than ever, the SSDs inside them - the heart of storing all of the music and other entertainment data - must be even smaller, and much thinner. Toshiba's new 64GB and 128GB Blade X-gale SSDs are the thinnest available within the company's comprehensive portfolio of SSD solutions. At a thickness of 2.2mm, the modules are 42 percent thinner than that of a typical mSATA SSD, and Toshiba's advanced wiring technology has assured optimized wiring layouts and data transfer rates in this new form factor. Thanks to Toshiba's base design technology that minimizes board warpage during thinning, 256GB capacity can be achieved when mounted on both sides, the largest density in the industry for small type SSD modules. Toshiba also offers designers a choice of mSATA and Half-Slim SSD modules in capacities up to 128GB.

"Until recently, storage designers looking for high capacity storage had accommodated the size of HDD into their designs," continued Nelson. "Up to this point, SSD designs also followed the basic design of small form factor HDD - which does not fully leverage the capabilities of high density NAND technology. Toshiba's module-based SSDs break with this approach, giving hardware designers greater freedom and flexibility in enabling their product design."

Toshiba will continue to promote innovations that widen the horizons of the NAND Flash market and support the company's continued leadership in that market. As such, Toshiba will generate demand for SSDs in notebook PCs, netbooks, laptops, and digital consumer products by enhancing its line-up, offering products with various densities and interfaces in a range of packages - while also advancing device performance. 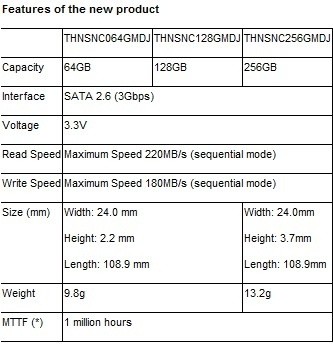