Both models are strong in style and specs, which include Intel® Core™ i7 quad-core processors, 1.5TB(2) hard drives and Windows® 7 Home Premium. They're also highly scalable, allowing the integration of many advanced components and gaming peripherals for battle.

"We're now offering two killer Predator models with the goal of satisfying a wider range of gamers," said Steve Smith, senior business manager of consumer desktops for Acer America. "Not everyone needs the most extreme gaming rig, so we designed the AG5900, a more mainstream alternative to our premium AG7750. The AG5900 boasts excellent core features, such as a high- speed processor, excellent graphics and tons of memory to hobble the competition at an affordable price." 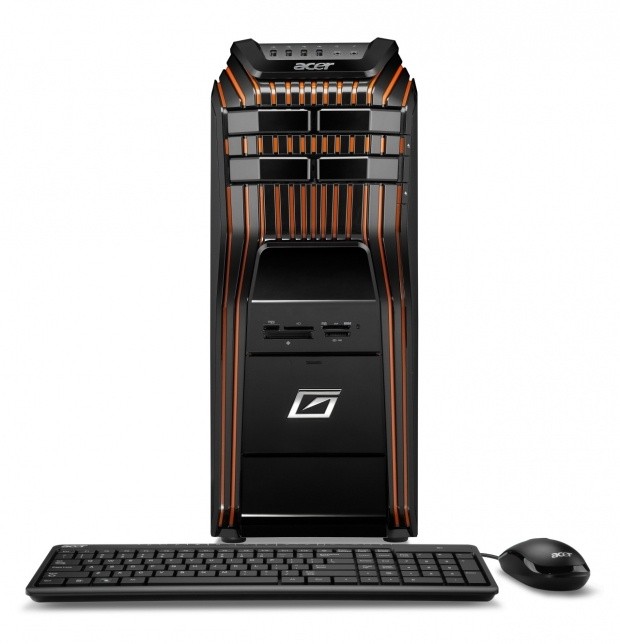 The newest model in the Predator line, the Predator AG5900-U3092 sports a clean and sophisticated exterior that shrouds a powerful set of features. A modern black chassis features dramatic orange accents and an eye-catching vent design. For easy access, the power button, four USB ports as well as headphone and microphone jacks are conveniently angled on the top of the system along with a storage tray for storing and charging smart phones, digital cameras and other devices. Handy cable management is provided via intuitive grooves in the storage tray that allow different sizes of cable to snap in between, which prevents tangling and having to fumble around to find loose cables. It also has four hard drive bays, two of which are easy-swap, enabling extra hard drives to be inserted without opening the box. Users just push on the protective door and the hard drive slides out on a tray.

This system is outfitted with a multi-in-one card reader and a combo/DVD super-multi optical drive for enjoying the most cutting-edge HD games. For those wanting to invest in future upgrades, the AG5900 is easily expandable with an available 5.25-inch optical drive bay, three open 3.5-inch HDD bays as well as two open PCI Express x1 slots and a standard PCI. There is a host of connectivity options including 12 total USB 2.0 ports (four on top, eight in back), an HDMI port, three audio jacks, an Ethernet port, display port and two DVI ports. To simplify transport, the system comes with a handle.

Aspire Predator AG7750: Tricked Out From the Top Down

The Predator AG7750-U3222, Acer's premium gaming system is cutting edge from the inside out, featuring a bold design and advanced performance features. Boasting a NVIDIA® GeForce® GTX470 with NVIDIA® SLI™ technology, this dynamic system can scale performance by combining multiple NVIDIA graphics solutions in a 3-way SLI-certified motherboard, which can run up to three GPUs simultaneously for the ultimate in realistic visuals. NVIDIA® GeForce® GTX470 also enables the system for 3D gaming. Users can add an Acer GD245HQ/GD235HZ 3D monitor for a fully immersive experience with NVIDIA® 3D Vision™ wireless glasses and advanced software, which transforms hundreds of PC games into stereoscopic 3D. Combine these benefits with high-definition 7.1-channel audio with EAX (Environmental Audio Extensions) 5.0 for immersive surround sound and it's gaming nirvana.

A force to be reckoned with, the Predator AG7750 is packed with an Intel® Core™ i7 930 quad-core processor with Intel® Turbo Boost Technology and 12GB SDRAM. The two-part liquid cooling system keeps the system cool even during intense gaming sessions.

Three additional easy-swap hard disk drive (HDD) cages allow up to a total of four Serial ATA 3 G/bs high-capacity hard disks to be added with up to a 2TB(2) capacity per single drive for a total storage capacity of up to 8GB(2). Users can save games, movies, music and more on the local disks, which can be easily swapped or removed for transport.

The dramatic orange and black desktop boasts a mechanized front cover that can be raised up and over the front of the chassis to provide convenient access to a multi-in-one card reader as well as USB and audio ports.

Since its founding in 1976, Acer has achieved the goal of breaking the barriers between people and technology. Globally, Acer ranks No. 2 for total PCs and notebooks.(1) A profitable and sustainable Channel Business Model is instrumental to the company's continuing growth, while its multi-brand approach effectively integrates Acer, Gateway, Packard Bell, and eMachines brands in worldwide markets. Acer strives to design environmentally friendly products and establish a green supply chain through collaboration with suppliers. Acer is proud to be a Worldwide Partner of the Olympic Movement, including the Vancouver 2010 Olympic Winter and London 2012 Olympic Games. The Acer Group employs 7,000 people worldwide. 2009 revenues reached US$17.9 billion. See www.acer-group.com for more information.