AVADirect, a recognized leader in the computer industry, introduces the X7200 gaming notebook, the fastest desktop replacement on the planet.

The X7200 custom notebook is the pinnacle of mobile computing and gaming performance. An evolutionary successor to the highly acclaimed Clevo D900F notebook, the new Clevo X7200 gaming notebook supports Intel's renowned Hexacore processors and two Nvidia Geforce GTX 480M GPUs, the most powerful mobile GPUs in existence. This means the X7200 launches with up to 50% more cores and cache, as well as twice the graphics performance of its predecessor.

The new aluminum-clad X7200 also offers improved storage and memory capabilities, with two superfast USB 3.0 ports, and up to 12 GB's of triple channel DDR3 memory. Although the three 9.5 mm drive bays and onboard RAID support are unchanged, advances by our storage partners allow us to offer our Flagship notebook with more than 2 TB's of Hard Disk space or 1TB of SSD storage, and numerous combinations in between.

When configured with two GTX 480Ms, the Clevo X7200 from AVADirect has no less than 4 GB's of ultrafast GDDR5 graphics memory, and more than 700 powerful "CUDA cores" at its disposal. When combined with one of Intel's Hexacore desktop processors, 12 GB's of triple channel DDR3 memory, and three of the industry's fastest SSDs, the X7200's specifications and performance surpass every other gaming notebook on the market, and rival all but the most elite gaming desktops on the planet, most of which will never leave their desk side.
In the near future, AVADirect will also introduce a mobile workstation variant of the X7200 that will feature up to 24GB's of DDR3 triple channel memory, two Quadro 5000M GPUs in SLI, and support for the latest 6-Core Xeon processors. "With its unrivaled expandability, unheard of performance, and unmistakable versatility, the X7200 is truly the ultimate desktop replacement notebook," says Griffin Ralston, Director of Analytics and Development at AVADirect. 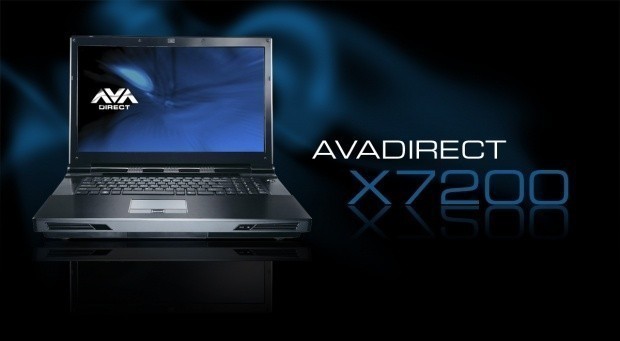 AVADirect is a privately owned custom computer manufacturer based in Twinsburg, Ohio, (within close proximity to Cleveland) specializing in the design, engineering and manufacturing of personalized high performance computer systems. The systems span the spectrum from Windows or Linux manageable and highly-reliable servers, to high-end workstations and gaming systems, to business PC's, notebooks and barebones systems and parts, focused on the commitment to meet the everyday demands of the marketplace, while creating a footprint within the industry.