SAPPHIRE Technology has just strengthened its mainstream range of ATI-based graphics cards with the introduction of several new models in the HD 5500 series and a new bundle deal with ArcSoft.

The SAPPHIRE HD 5500 series is based on the highly successful graphics architecture from the ATI division of AMD, built in its 40nm process. It supports the advanced graphical features of Microsoft DirectX 11, as well as on-board Stream Processing and video decoding, delivering superb video clarity and visual effects, whilst consuming very low power levels. 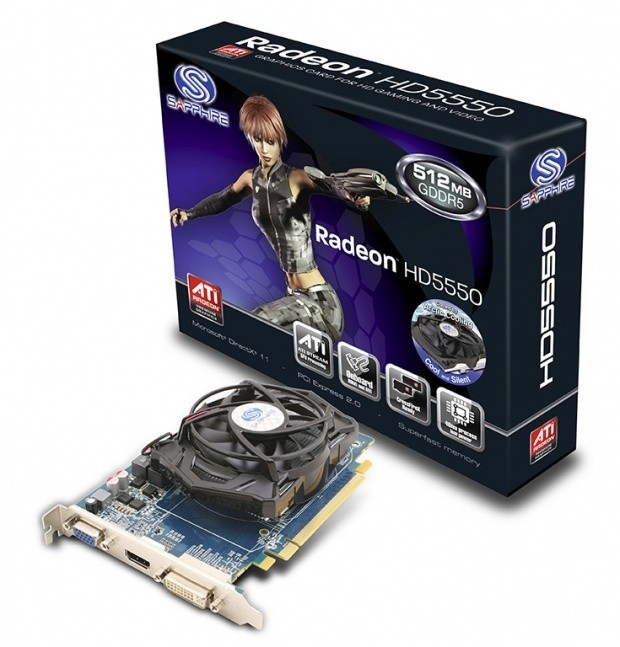 The SAPPHIRE HD 5550 family of graphics cards have 320 Stream processors and support Microsoft DirectX 11 as well as accelerating applications compatible with ATI Stream. SAPPHIRE now offers several new models with different memory configurations and display output options giving users a choice of card for different applications, and different budgets. As the core technology is low power, no external power connection is required, making this series ideal for system upgrades or mainstream PCs that do not have high end power supplies.

ATI Eyefinity multi-screen technology is supported by models with a DisplayPort output. This technology gives users the ability to work across three monitors as though it were one large monitor, bringing huge productivity benefits to applications such as photo editing, music creation and document creation.

Other models in the SAPPHIRE HD 5550 series have the alternative output configuration of DVI, HDMI and VGA. This is the most flexible combination of monitor outputs and allows the use of HDMI enabled monitors or digital TVs to be directly driven with both video and sound signals over a single HDMI cable.

Ideal for media applications, all members of the SAPPHIRE HD 5550 series have an on board hardware UVD (Unified Video decoder) considerably reducing CPU load and delivering smooth decoding of Blu-ray and HD DVD content for both VC-1 and H.264 codecs, as well as Mpeg files. In the SAPPHIRE HD 5000 series the UVD has been enhanced to be able simultaneously to decode two 1080p HD video streams and to be able to display HD video in high quality with Windows Aero mode enabled. It supports HDMI 1.3a with Dolby TrueHD and DTS-HD Master Audio.

ArcSoft TotalMedia Theatre 3 is a new generation of media player that uses ATI Stream technology supported by the SAPPHIRE HD 5550 series to provide smooth, video playback of Blu-Ray and HD-DVD content as well as upscaling other video material. A new deal with ArcSoft gives purchasers of the SAPPHIRE HD 5550 series a 50% discount on upgrading to the 'Gold' or 'Platinum' versions from now until the 30th August 2010.

The SAPPHIRE HD 5500 series is fully compatible with DirectX10.1, DirectX 10 and DirectX 9.0 games and applications, as well as showing stunning new levels of detail, transparency and lighting effects in newer releases of software using DirectX 11. Native CrossFire support allows two or more cards to be used together for additional performance on a suitable CrossFireX compatible mainboard. On the HD 5500 series, CrossFireX is supported in software by the driver, and no additional interconnect is required.

The SAPPHIRE HD 5500 series is supported by AMD's Catalyst DirectX 11 WHQL certified graphics driver which together with this generation of hardware delivers support for all of the key DirectX 11 level features including DirectCompute 11 instructions, hardware Tessellation and multi-threaded communications with the system CPU. They also support ATI Stream, accelerating supported applications such as video transcoding and rendering tasks by executing instructions on the GPU architecture rather than the system CPU.