Based on Intel's X58 chipset architecture and using the flagship Core i7-980X Extreme Edition processor, the Rampage III Extreme has reached previously unattained heights in Futuremark's industry standard 3DMark 2003, 3DMark 2005, 3DMark 2006 and 3DMark Vantage benchmarks for a single CPU based platform and exceeded a dual CPU based platform in 3DMark Vantage. With the new Extreme Engine Digi+ power delivery system, enhanced bios controls and extensive adjustment ability utilizing the award winning ROG Connect hardware/software, the Rampage III Extreme has ushered in a new level of performance and usability for those wanting to set performance records or build an ultra stable and fast system for gaming. Lastly the Rampage III Extreme not only provides high quality component selections like an Intel Gigabit LAN controller and power design by CHiL but also the latest storage performance options featuring USB 3.0 and SATA 6G. Along with a cutting edge yet functional design, the Rampage III Extreme reaffirms ASUS' commitment to the enthusiast who values quality, innovation, and workmanship and top tier performance. 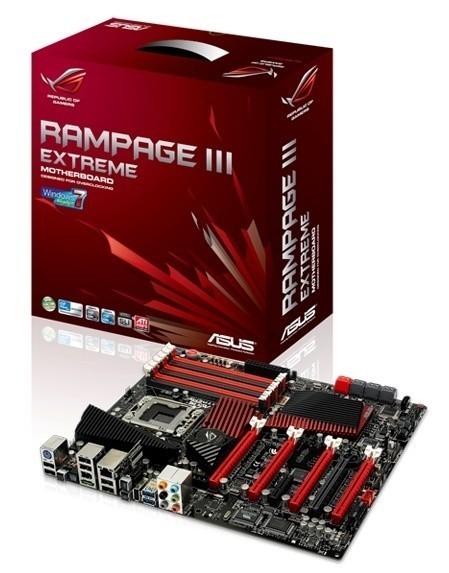 The ROG Rampage III Extreme scored a mind-blowing 51,410 in 3DMark Vantage with the High Preset setting while the Extreme Preset benchmark hit an amazing 39,212. With a team of passionate engineers devoted to providing the best experience for Gaming, Overclocking or PC Enthusiast, it's no wonder ROG motherboards maintain a noticeable lead in the industry when it comes to performance.

ASUS is a leading company in the new digital era, with a broad product portfolio that includes notebooks, netbooks, multimedia, motherboards, graphics cards, multimedia, displays, desktop PCs, servers, wireless solutions, mobile phones and networking devices. Driven by innovation and committed to quality, ASUS designs and manufactures products that perfectly meet the needs of today's home and office users. ASUS won 3,268 awards in 2009, and is widely credited with revolutionizing the PC industry with the Eee PC. With a global staff of more than 10,000 and a world-class R&D design team, the company's revenue for 2009 was US$7.5 billion. ASUS ranks among BusinessWeek's InfoTech 100, and has been on the listing for 12 consecutive years.

ASUS is the number one motherboard brand in the world, commanding the largest market share globally. Today, one in every three computers contains an ASUS motherboard. ASUS is the pioneer of numerous innovations that are now industry standards. Recent examples include the Hybrid Phase power design, Hybrid Processor, Hybrid Switch overclocking design and Protect 3.0 for safe operation. With decades of expertise and dedication to pushing the motherboard design envelope, ASUS is poised to continue leading the industry in performance, quality, innovation, safety and reliability.