The new drives offer a unique balance of performance, high-capacity storage and long-term reliability. SanDisk SSD P4 and SanDisk SSD G4 offer up to 128 gigabytes (GB)1 and 256GB of storage respectively, double the capacities of the company's previous SSD offerings. The drives are available in various compact form factors, which SanDisk can customize according to manufacturers' specification, offering greater freedom and flexibility in how OEMs design their products. The SSDs use SanDisk's advanced 32-nanometer (nm) multi-level cell (MLC) process technology, which enables cost-competitive high-capacity storage with a tiny footprint. 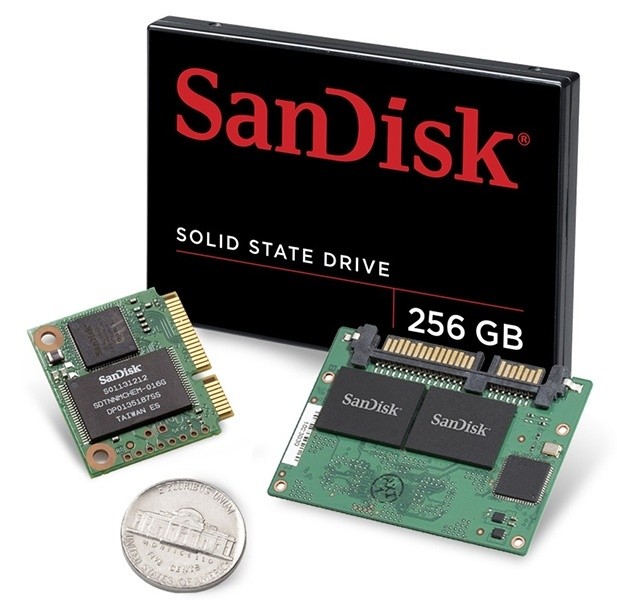 Capacity and Performance: Ranging from 64GB to 256GB with sequential read/write speeds of up to 220 and 160MB/sec3. The drive's combination of high capacities and performance delivers the fast boot times, enhanced system responsiveness and space needed to easily handle storage-intensive data such as videos, photos, music and games.

Endurance: SanDisk SSD G4 offers Long-term Data Endurance (LDE) of 160 terabytes written (TBW) for a 256GB drive, sufficient for over 10 years of PC usage4, well beyond a typical user's length of ownership of a computer.

Large Capacity, Tiny Footprint: With capacities ranging from 8GB to 128GB, the drive lets OEMs equip small devices with big storage where a bulky HDD is not an option. The drive is available in various form factors that include a new ultra-small variant of the mSATA module, mSATA mini, with dimensions of 26.80 x 30.00 x 3.4 mm. This is SanDisk's tiniest SATA module form factor.

Multiple Applications: SanDisk SSD P4 is ideal for use in small devices such as netbooks, smartbooks, tablet computers and ultra-thin notebooks, in addition to POS terminals, Set Top Boxes (STBs), printers and other devices that use embedded flash.

The SanDisk SSD G4 and SanDisk SSD P4 are currently being evaluated by top tier OEMs. High-volume production of the drives is expected in the Q3 2010 timeframe with product available to OEMs at that time; pricing will depend on the quantity ordered.