Fremont, CA (March 26th, 2010) - Long awaited by gamers, overclockers and demanding enthusiasts, the latest generation GF100 graphics processor from NVIDIA® is finally here. ASUS is the first to release fully-optimized GTX480/470 graphics cards with customized features that deliver advanced hardware support and performance in the most demanding Microsoft DirectX 11 based gaming titles or applications that can harness the power of CUDA ™. 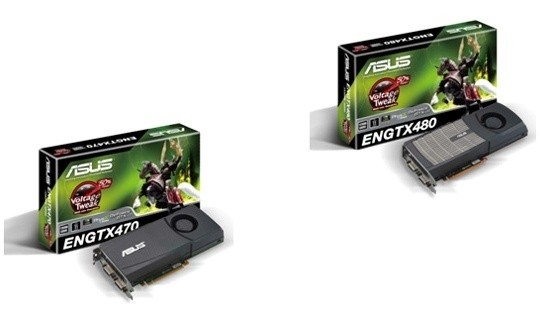 Gearing Up for Action

Pushing the boundaries of performance

Both new graphics boards feature ASUS' focus on innovation and passion to provide the best gaming and overclocking experience possible via GamerOSD and Voltage Tweak applications. GamerOSD is an award winning in-game application allowing for frame rate monitoring, screenshots, in-game video capture or on-the-fly overclocking.
ASUS' exclusive Voltage Tweak functionality can be enabled and controlled via the Smart Doctor application, covering almost every possible overclocking and overvolting scenario envisioned by users. Additionally the extensive fan control configurations in Smart Doctor allow for complete control of cooling performance of the card, users can even set their own fan ramping profiles.

ASUS is a leading company in the new digital era, with an extensive product portfolio that includes notebooks, netbooks, motherboards, graphics cards, displays, optical drives, desktop PCs, servers, wireless solutions, mobile phones and networking devices. Driven by innovation and committed to quality, ASUS designs and manufactures products that perfectly meet the needs of today's digital home, office and person. ASUS won 3,268 awards in 2009, and is widely credited with revolutionizing the PC industry with the Eee PC™. With a global staff of more than ten thousand and a world-class R&D design team, the company's revenue for 2008 was 8.1 billion U.S. dollars. ASUS ranks among BusinessWeek's InfoTech 100, and has been on the listing for 12 consecutive years.