CEBIT-HANOVER, Germany-Mar. 2, 2010- NVIDIA introduced the Next-generation NVIDIA ION graphics processor today, which will supercharge netbooks with 10 times the graphics performance of standard netbooks1 and enable up to 10 hours of battery life2 thanks to NVIDIA Optimus technology. 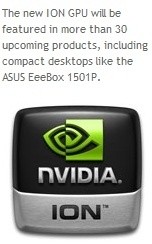 The new ION netbooks also feature NVIDIA's highly acclaimed Optimus technology, which automatically selects the best graphics processor for running any given application - seamlessly routing the workload to either an NVIDIA discrete GPU or Intel integrated graphics. The result is great battery life and superior performance when you need it.

"Most netbooks have lousy performance, but ION changed all that. ION netbooks let you do all of the things people expect from a notebook. Now, with Optimus they give you super long battery life too. It's the best of both worlds."
- Rob Enderle, President and Principal Analyst of the Enderle Group, one of the most influential technology experts in the world

"ASUS recognizes that not all consumers are satisfied with the basic netbook experience. Our Eee PC with ION graphics raised the bar for netbook performance, and now it's getting even better with Optimus. EeePC netbooks with ION graphics are perfect for users who want great media capabilities and all-day battery life."
- by S.Y. Shian, Vice President and General Manager of Notebook Business Unit, System Business Group , ASUS Corp

"If you want a netbook with the horsepower to play HD video and PC games, your only choice is ION. The new ION netbooks deliver an unbeatable combination of performance and battery life. We continue to raise the standard for what a netbook should be."
- Drew Henry, General Manager of GeForce and ION GPUs