"When our 40nm-class DDR3 was first introduced last July, we were well ahead of the curve for high density, high performance DDR3," said Dong-Soo Jun, executive vice president, memory marketing, Samsung Electronics. "Now, in just seven more months, we have introduced an ultra-low power 'Green Memory' - the 4Gb DDR3, which is double the density of its predecessor. At a module density of 16-gigabyte (GB), the 4Gb based module can save 35 percent in power consumption, to support customer requirements for more energy-efficient designs." 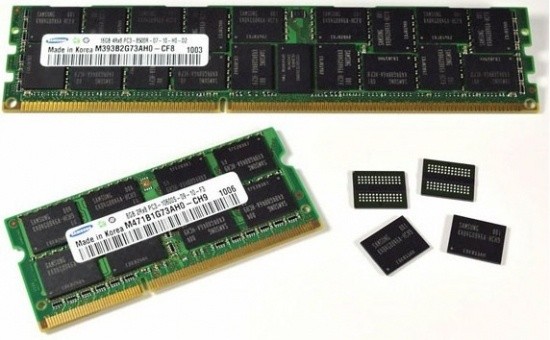 Production of the 4Gb DDR3 raises the amount of memory for use in servers to 32Gigabytes (GB) per module, which is twice the maximum density achieved with modules based on 2Gb components.

With the start of volume 4Gb DDR3 production, Samsung plans to migrate more than 90 percent of its DDR DRAM production to 40nm-class process technology, to provide its customers with the most cost-efficient DRAM component available today, at the same time solidifying its market-leading position.

Today, servers are equipped with an average of six registered dual in-line memory module (RDIMMs) sockets per CPU, with which up to a 96GB DRAM capacity can be accommodated. Power consumption varies depending on the component featured. A module based on 60nm-class 1Gb DDR2 components consumes 210W, while a 40nm-class 2Gb DDR3-based module consumes 55W, representing an approximate 75 percent savings. However, the new 40nm-class 4Gb DDR3-based module consumes a mere 36W, which represents about 83 percent savings over the 60nm-class 1Gb DDR2 module. With growing concern about energy costs in data centers, these memory power savings translate into an overall reduction in server power of 10 percent per system.

The 4Gb DDR3 raises the small outline dual inline memory module (SoDIMM) density to 8GB. This enables a system level density of up to 16GB for two socket modes, or 32GB for four socket models, which is expected to meet much of the growing demand for high-performance notebooks with advanced graphics.

The new 4Gb DDR3 supports both 1.5V and 1.35V specifications. Available memory modules include 16 and 32GB RDIMMs and 8GB SoDIMMs with a 1.6-Gigabit per second (Gbps) performance rate.