Two Hollywood film production studios relied extensively on NVIDIA Quadro professional graphics solutions to create over 500 spectacular effects for "2012", the newest film from director Roland Emmerich that depicts in jaw-dropping detail the cataclysm of epic proportions that awaits the earth in 2012.

Uncharted Territory and Scanline VFX utilized NVIDIA Quadro GPUs (graphics processing units) to deliver ground breaking visual effects in the blockbuster hit which has pulled in more than $600 million in box office receipts worldwide since its premiere on November 13th, 2009. 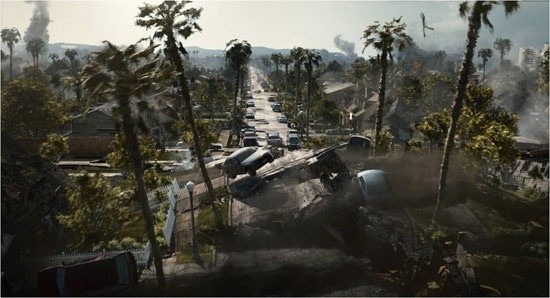 Uncharted Territory, located in Los Angeles, was the lead visual-effects vendor on the movie and Scanline VFX, located in Los Angeles and Munich, created 90 percent of the film's computer generated water scenes. Both made heavy use of NVIDIA Quadro professional graphics solutions to create stunningly realistic, apocalyptic scenes including a tsunami-surfing aircraft carrier.

"In creating the cataclysmic events of 2012, we couldn't risk our own catastrophic failure or delays, and that's why we rely on NVIDIA GPUs," said Marc Weigert, co-founder of Uncharted Territory, "All of the 100 plus workstations custom-built for this project include an NVIDIA Quadro FX processor, selected for both the high reliability and ultra-high performance required in our line of work."

Their groundbreaking work can be seen throughout the film. Uncharted Territory came up with some absolutely stunning visual effects, like the Los Angeles earthquake sequence, and the whole Las Vegas segment that includes the dramatic escape of a transport plane during the destruction of many iconic landmarks.

Uncharted Territory completed 422 visual effects shots that appear in the film using over 100 NVIDIA Quadro powered workstations that were custom built for "2012." At Uncharted, artists tap the power of the NVIDIA GPU to preview effects at their workstations. In addition, because Uncharted Territory was co-located with the production offices for this film, director Roland Emmerich reviewed daily screenings of shots-in-progress utilizing an NVIDIA Quadro solution with SDI (serial digital interface) video output.

Scanline VFX, which specializes in the simulation of water and fire, created some of the film's hallmark shots, including an aircraft carrier caught in a tidal wave that smashes into and destroys the White House, and huge waves cresting the Himalayas. Remarkable computer generated water sequences like these are developed using Scanline's proprietary water simulation system running on NVIDIA Quadro GPUs.

Scanline is so amazed with the advances achieved in real-time production that the studio is currently investing heavily in the development of a GPU-based pipeline to leverage the NVIDIA CUDA parallel processing architecture for accelerated final rendering.

"We plan to replace nodes in our render farm with NVIDIA Tesla GPU computing servers," said Stephan Trojansky, president of Scanline VFX LA and Flowline GMBH. "Based on our early tests, we expect this will speed up our production timeline by at least ten fold."