Sydney, Australia - 8 December 2009: Edimax, a company dedicated to the design, development, and manufacture of leading networking solutions today revealed that they will release the world's first Edimax 3G-6210n wireless 3G router in early 2010.

Designed for today's on-the-go internet savvy generation, the 3G-6210n is a world first that allows users to share their 3G Broadband without the hassle of having to plug into a power supply. 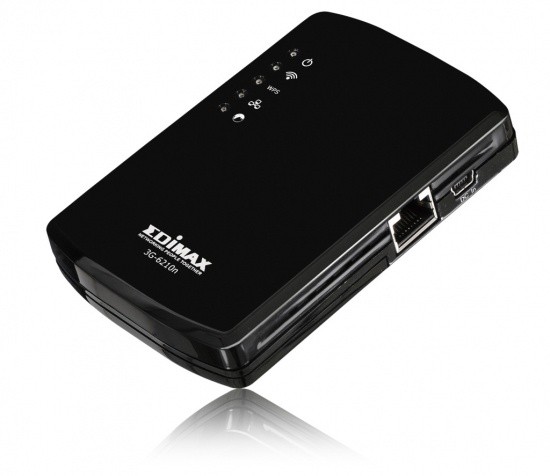 The 3G-6210n will be among the smallest wireless 3G portable broadband router and will come with a built-in rechargeable Li-ion battery to make this ultra-portable router ideal for groups who is out and about but wants a constant internet connection.

For employees away from the office, needing to keep up to date with emails and work, the battery powered Edimax 3G-6210n will not only solve the offline issue through sharing of wireless 3G USB device but will eliminate the need to be in areas that do not have the convenience of power points.

Populations living in metropolitan cities will be able to enjoy the flexibility of choosing either LAN, WAN or 3G access point using the Edimax 3G-6210n and will no longer be restricted to areas without the need of a direct power supply. Students and business people alike can take advantage of the outdoors and field visits and take advantage of a shared internet connection among groups.

The Edimax 3G-6210n will come with a high speed solution that complies with wireless 802.11b/g and when operated with the latest wireless 802.11n technology, its wireless data transmission rate can reach 150Mbps. Users will be able to connect and share anywhere, anytime.

This, first of its kind, router will be easier to configure and will include a unique multi-language EZMax setup wizard, SSID, wireless security and firmware upgrade to make it simple for users to setup their internet connection.
The Edimax 3G-6210n wireless 3G router will ship into Australia early 2010.

Edimax Technology is a global manufacturer of a broad range of networking and connectivity solutions. Since its foundation in 1986, the company has grown to be one of Asia's leading manufacturer of networking products and solutions. Edimax is headquartered in Taipei County, Taiwan, and has been a listed entity at the Taiwan Stock Exchange since 2001. In 2007, the company's revenue reached US $100 million and its current workforce count is over 900 employees worldwide. Edimax's complete product portfolio fulfils all connectivity needs, whatever the network architecture or application requirements are.