Together, Audi and Bang & Olufsen present the new generation of the highly acclaimed Advanced Sound System which was first launched in the model year 2005 of the Audi A8. In the new Audi A8, the Bang & Olufsen Advanced Sound System surpasses previous achievements with superior sound performance, more power and a new design language to complement and enhance the exclusive interior of the car. 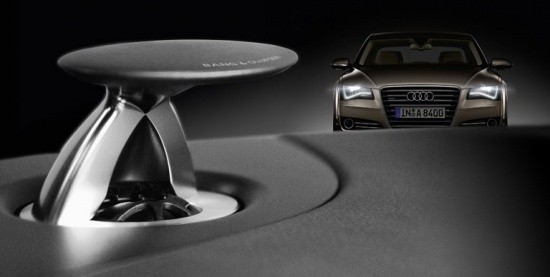 In 2008, it was announced that Audi and Bang & Olufsen would continue to build on their cooperation success through the development of a new generation Advanced Sound Systems for a broad range of new Audi models. At the Design Miami trade show, the new Audi A8 is now presented with the first member of this new generation in automotive sound from Bang & Olufsen.

Evolution based on revolution
When Bang & Olufsen launched the first generation Advanced Sound System for the Audi A8 in 2005, the system was received as a revolutionary design statement offering an acoustic experience unmatched in the automotive industry. In addition, the system took quality and craftsmanship of the sound system components to a new level. Experts and journalists gave the sound system a hugely positive welcome and among others, the German car magazine 'auto motor und sport' described the Bang & Olufsen Advanced Sound System as "nothing short of a revolution surpassing all previous automotive audio systems".

Adding to the magnificent features of the first generation, the new Bang & Olufsen Advanced Sound System has five additional loudspeakers, a total of 19, each driven by its own discrete channel of digital signal processing and amplification. Thanks to the use of Bang & Olufsen's proprietary ICEpower technology the system produces a total amplifier power of 1.348 watts at only 1% distortion (equals 1.460 watts at the usual 10% automotive distortion specification).

The loudspeaker grills for the midranges and woofers in both front and rear doors are organically shaped and each formed from a single piece of aluminium thus integrating perfectly with the Audi A8's interior curves. Further development of the Bang & Olufsen aluminium competences made it possible to achieve the elegant result of the organic shapes, enhancing the contemporary interior of the new Audi A8.

"With the launch of the Bang & Olufsen Advanced Sound System in the former Audi A8 in 2005, Audi and Bang & Olufsen jointly changed the paradigm for in-car audio. By the introduction of the second generation Advanced Sound System in the new Audi A8, the cooperation follows up on the success through continued development of both the acoustic and aesthetical elements of the sound system, and thus defines a new reference within ultimate audio", states Bang & Olufsen Vice President, Jens Peter Zinck.

The new generation Bang & Olufsen Advanced Sound System offers improved sound both for passengers in the front- and rear-seats. For the front passengers, improved staging and imaging is enabled by the midrange speakers in the front doors, a two-channel centre speaker and the enhanced acoustic lenses. The rear seat sound performance is distinctly improved through the introduction of a three-way speaker system in each of the rear doors and a two way system on the parcel shelf.

Privacy effect and personal drive-in movie
The four additional rear loudspeakers especially improve the listening experience during playback of discrete multi-channel audio formats. This means that an even more "movie theatre like" experience is gained, particularly in conjunction with the Audi Rear Seat Entertainment package. This feature is complemented by the option of selecting the special sound mode 'Movie', giving a sound experience close to what you would have at the cinema. This gives the idea of drive-in movies a whole new meaning. The 'Movie' sound mode in the A8 can be adjusted via the 'DSP Bang & Olufsen' menu in the Audi infotainment system MMI.

The 'Volume Levelling' feature is a highly advanced vehicle noise compensation algorithm that is specifically optimised for the new Audi A8. The main input to the Volume Levelling system is a discrete, integrated microphone in the ceiling that continuously detects the background noise, including sound generated by the air conditioning, engine and road. This system ensures that the optimum sound experience is constantly enjoyed for each occupant of the vehicle whatever the conditions.

The closed speaker cabinets ensure that music and phone calls stay in the car, giving an optimal 'privacy-effect' e.g. for taking business calls, and furthermore the closed cabinets reduce undesired vibrations from the door trim when playing music at high sound pressure levels.